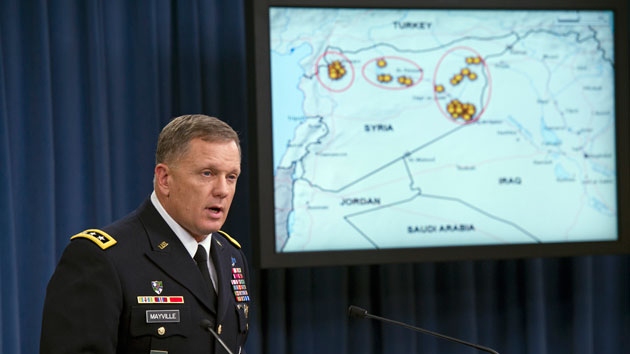 Army Lt. General William Mayville Jr. speaks about the operations in Syria during a news conference at the Pentagon.Cliff Owen/AP

Update (11/7/2014): CBS News reported on Thursday that one of Al Qaeda’s lead bomb makers, a member of the Khorasan group targeted by the first US airstrikes in Syria, is dead—according to US officials. Officials claim that one of the missiles fired at Khorasan targets struck a car reportedly carrying David Drugeon, the former French intelligence officer who helped develop some of the group’s secretive bombs designed to make it past airport security. “Sources told CBS News…that Drugeon’s death would be a severe blow to Khorasan’s plans to attack Europe and the US,” CBS reports.

On Monday night, September 22, a US-led coalition launched air strikes in Syria against members of ISIS, the extremist Islamic group occupying territory in Iraq and Syria. As a “last-minute add-on,” NBC reports, the United States also targeted a different terrorist group: a little-known outfit called Khorasan. This Al Qaeda affiliate gained some public attention earlier this month after US officials reported that the extremists were plotting to sneak bombs on to US airplanes. Last week, Director of National Intelligence James Clapper noted that the group “perhaps” posed as great a threat to the United States as ISIS. On Tuesday morning, Pentagon spokesman Rear Adm. John Kirby maintained that strikes on ISIS and Khorasan were “very successful.” The US targeted Khorasan’s “training camps, an explosives and munitions production facility, a communications building and command and control facilities,” the Pentagon told the Washington Post.

News of these air strikes raised an obvious question: Who and what is Khorasan? The group is led by Muhsin al-Fadhli, a 33-year-old senior Al Qaeda operative who was privy to Osama bin Laden’s 9/11 plans prior to the attacks, according to the New York Times. US officials have tracked Fadhli for years, and the State Department refers to him as a “senior facilitator and financier” for Al Qaeda. In 2012, the State Department was offering up to $7 million for information about his whereabouts. Born in Kuwait, he has operated in Chechnya, fighting Russian soldiers, according to the United Nations, and has been wanted in connection to Al Qaeda attacks in Saudi Arabia.

In a conference call with reporters after the air strikes, several senior administration officials, speaking on background, said that Khorasan had established a safe haven within the chaos of Syria to plot attacks against the United States and other Western nations. One official reported that this planning was “nearing the execution phase.” A senior administration official also said that Khorasan—described as a band of experienced Al Qaeda veterans—was recruiting Westerners fighting in Syria for “external operations,” and that Khorasan plotting had prompted the United States to beef up aviation security measures a few months ago. One administration official noted that President Obama had been contemplating strikes against Khorasan for months “separate and apart from the growing threat from ISIL.”

On Monday, prior to the strikes, Brian Forst, a professor at American University and a counterterrorism expert, told Mother Jones, “If we can find al-Fadhli and take him out, Khorasan will be largely neutered.” Brian Michael Jenkins, a senior terrorism expert with the RAND Corporation, contends that leaders can always be replaced, referring to both Al Qaeda and ISIS, which have cycled through different leaders. “It doesn’t end their operations,” Jenkins says. “It has a disruptive effect.”

Khorasan, according to press reports, has about 50 jihadist fighters, mostly from Afghanistan and Pakistan. US officials told the AP earlier this month that the group was sent to Syria by Al Qaeda top dog Ayman al-Zawahari to link up with another Al Qaeda affiliated group, the Nusra Front, and “recruit Europeans and Americans whose passports allow them to board a US-bound airliner with less scrutiny from security officials.”

Aki Peritz, a former counterterrorism analyst with the CIA, says, “It’s much easier to recruit people—especially those with foreign passports—in Syria than in Pakistan for operations abroad.” He adds, “Given that there are several thousand foreigners in Syria today, it’s probably much easier for Al Qaeda to spot, assess, develop, recruit, and train willing individuals there than anywhere else in the world.”

Jenkins compared the fighting in Syria and Iraq to a “talent show” that Khorasan was watching and judging, looking for recruits. Khorasan is “scarier” than ISIS, he argues, because it is focused primarily on attacking the West. Forst also notes that Khorasan focuses “more on the West than Syria,” while ISIS is “focusing on Middle Eastern targets.”

So does the Obama administration have the legal authority to hit Khorasan? Under the post-9/11 authorization provided by Congress in 2001, the president is allowed to use force against “those nations, organizations, or persons he determines planned, authorized, committed, or aided the terrorist attacks that occurred on September 11, 2001.” And senior administration officials contend that this authorization covers Khorasan, given its connection to Al Qaeda.

In in a statement on Tuesday morning, Obama referred to Khorasan as “seasoned Al Qaeda operatives”—and he seemed to this group with ISIS, as he vowed to “do what’s necessary to take the fight to this terrorist group.” He added, “Once again, it must be clear to anyone who would plot against America and try to do Americans harm that we will not tolerate safe havens for terrorists who threaten our people.” But as the president spoke, there was not sufficient public information to judge the nature and seriousness of the threat posed by a group most Americans had not yet heard of.