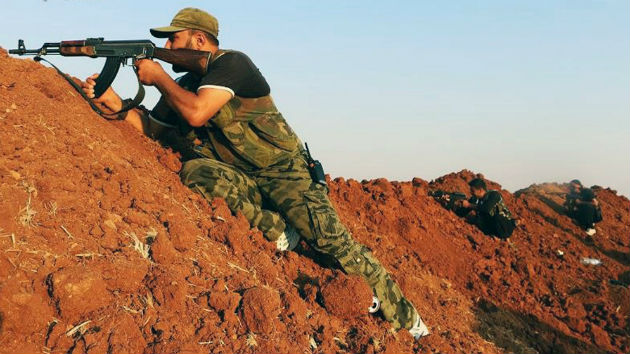 Last week, President Barack Obama outlined his plan for expanding military action against ISIS, the murderous Islamic extremist group that controls territory in Iraq and Syria. His beefed-up campaign includes increased funding previously announced (up to $500 million) to train and arm supposedly moderate rebels in Syria who are fighting the dictatorial regime of Bashar al-Assad and also at times battling ISIS. For the past few years, Washington has assisted Syrian opposition forces deemed non-extremist—even though they might be fighting alongside Al Qaeda-affiliated rebels. But the effort has not been a great success, with hawks accusing the Obama administration of not doing enough, and administration officials skeptical about the moderate opposition’s cohesion and military effectiveness and wary of doling out weapons that could fall into the wrong hands. In February, the leader of the moderate Free Syrian Army—who was the conduit for US aid to the rebels—was removed by his own council, partly because the FSA had been taking a beating from the regime and Islamist forces. Now Obama intends to boost the US effort to support these moderate fighters in Syria. But this move comes just weeks after the collapse of the Syrian Support Group, a US-based nonprofit backed by the State Department that boasted it delivered millions in dollars of nonlethal supplies to the FSA. According to former officials of the group, it shut down because of funding problems and divisions among rebel forces.

Working with the rebels in Syria will be a daunting task for the Obama administration. There are hundreds of anti-Assad militias, each with its own agenda. Some moderate bands have no interest in taking on ISIS. Some fighters shift allegiances between secular outfits and Islamic extremist groups. Neither the FSA nor the Syrian National Coalition, a political group representing the opposition, control or even coordinate all the various non-extremist fighters. And the dissolution of the Syrian Support Group in the United States—just at the time when Washington is ramping up its investment in the Syrian opposition—could be a troubling sign.

On August 19, the Syrian Support Group, which had previously arranged a few shipments of nonlethal aid to the Free Syrian Army, sent a letter to donors explaining why the group was shutting its doors. “Over the last year, the political winds have changed,” the letter read. “The rise of ISIS and Jabhat al-Nusra [an Al Qaeda-affiliated opposition force in Syria] and the internal divisions among rebel forces on the ground have complicated our efforts to provide direct support.” The letter noted that “more significant support” was heading to the FSA from Saudi Arabia, Qatar, the United States, and other governments. But rivalries and rifts within the opposition had impeded the overall effort. “It was difficult to keep things going with the changes in the FSA and its Supreme Military Council and the advent of ISIS,” says Majd Abbar, who was a member of the Syrian Support Group’s board of directors. “It made our operations extremely difficult.”

Abbar notes that the breakdown in leadership of the FSA—and the takeover of its bases and a key supply warehouse in December by the Islamic Front, an anti-Assad alliance with ties to Al Qaeda—made it impossible for the Syrian Support Group to continue operations to help the moderate opposition. “The arrival of ISIS and the [Islamic Front] takeover in the north led us to suspend operations,” he says. The moderate rebels the Syrian Support Group was attempting to aid, Abbar points out, were confronted by “major forces: the regime, ISIS, and Hezbollah.”

“The end of the Syrian Support Group is symbolic,” says the group’s former executive director. “It’s analogous to the whole situation there.”

And then there was money. After its first year or so of operations, Abbar says, there was a “lack of funding.” Brian Sayers, who was executive director of the group until June 2013, says the finances were always a problem: “It was impossible to get the right level of support.”

In August 2012, on the day the Obama administration announced it was sending $25 million in aid to the moderate opposition in Syria, the Treasury Department confirmed that it had issued the Syrian Support Group a license that allowed it to sidestep US sanctions aimed at Syria and deliver money and nonlethal aid to the Free Syrian Army. The group noted publicly it was the only US-based nongovernmental organization that possessed such a license. And it has claimed that it delivered over $15 million in nonlethal aid to the rebels. According to Sayers, the group organized a few shipments of MREs, first-aid kits, and other supplies through facilities on the Turkish-Syria border.

On April 29, 2013, then-US ambassador to Syria Robert Ford wrote a letter to the Syrian Support Group, praising it for helping coordinate the release of captive journalists, escorting humanitarian convoys, and “transporting and distributing crucial food and medical supplies to FSA battalions.” Ford also noted that the nonprofit “was a major factor in facilitating the State Department’s relationship with…FSA leaders.” But, Sayers says, a major and continuing effort on the part of the Syrian Support Group to supply the rebels never got off the ground. It could not attract the necessary funding from private individuals or governments.

In July 2013, the Daily Telegraph reported that the Syrian Support Group had “spent months pursuing a fruitless dash to make millions of dollars from Syrian oil” to raise money for the nonprofit. The article quoted David Falt, the group’s former European government affairs director, saying, “The idea they could raise hundreds of millions from the sale of the oil came to dominate the work of the SSG.” After the article was published, Sayers, in a letter to the editor, responded, “We were not obsessed with petroleum. We were focused on delivering aid from multiple sources to forces fighting to overthrow of the Assad regime.” And the Syrian Support Group issued a statement criticizing the story but noted that “SSG did in fact have preliminary discussions regarding the possibility of working with international partners to export Syrian oil for the direct financial benefit of the FSA. However, recognizing the sensitivities and legal complexities of such a project, the organization’s Board of Directors unanimously decided to discontinue any further explorations.”

In December 2013, the US suspended aid to Syrian rebels after those FSA facilities were seized by the Islamic Front, which is Saudi-backed and positions itself “halfway” between the FSA and extremists factions like ISIS, according to the Carnegie Endowment for International Peace. The Islamic Front also vacuumed up some rebels that were previously part of the FSA. (Fighters in the Syrian civil war often switch alliances based on which groups can provide them with arms.) Mazen Asbahi, a former member of the Syrian Support Group’s board of directors, says that in the fall, the Supreme Military Council of the FSA “was not getting the support it needed and was losing ground.” He adds, “That made it more difficult to raise support for the work of SSG during that period.”

The State Department refuses to discuss its collaboration with the Syrian Support Group. A department spokeswoman says, “The Department of State has worked with many organizations in this effort, including the Syrian Support Group; however, we don’t discuss specific relationships or partners for reasons related to their safety.” The United States is providing nearly $287 million in nonlethal transition support to the Syrian opposition, according to the department. The spokeswoman would not comment on the impact of the group’s closure on the department’s efforts to aid the Syrian opposition. But Khalid Saleh, a spokesman for the Syrian National Coalition, asserts that the FSA is doing fine: “Donors continue to support FSA at a much larger scale compared to when SSG was around.”

Former Syrian Support Group officials insist that the Syrian opposition is still worth supporting. Asbahi maintains that the threat of ISIS has unified moderate rebel forces. Abbar says it would not be “an impossible task” to supply weapons and other provisions to these moderate forces. And Sayers remarks, “Moderates could be found today. Yeah, they’re not all dead…But it would be like taking a kid not in school for two years and tutoring them in two months to get up to the game. What you will need is so much robust support, intelligence, training, lethal and nonlethal assistance.” But, he adds, “the end of the Syrian Support Group is symbolic. It’s analogous to the whole situation there.”