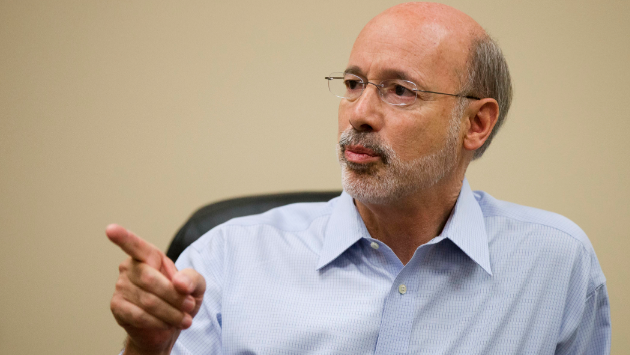 Tom Wolf, the Democratic candidate for Pennsylvania governor, promises that if he’s elected he won’t support a controversial bill that could force some abortion clinics in the state to close. Wolf’s opponent, Republican Gov. Tom Corbett, has trailed in recent polls and is expected to back the bill in the slim chance it clears a vote.

“Tom Wolf would not sign this bill. This is just an attempt to make it more difficult for women to access reproductive health care,” says Beth Melena, a spokeswoman for Wolf’s campaign. Corbett’s campaign did not respond to comment, but the bill’s sponsor, Republican Rep. Bryan Cutler, says that he expects that Corbett would support it. The governor has backed other abortion restrictions in the past, defending a bill that would require women seeking abortions to first obtain ultrasounds by noting, “You just have to close your eyes.”

The newer bill, introduced in February, would require doctors who perform abortions to get admitting privileges from a hospital which offers obstetrical or gynecological care less than 30 miles away from their clinic. Abortion rights supporters say the legislation is unnecessary because only 0.3 percent of abortions lead to major complications and abortion providers don’t need admitting privileges to transfer sick patients to hospitals. They believe the bill will limit Pennsylvania women’s access to safe and legal abortions, because not all doctors may work within 30 miles of a hospital and some religiously affiliated hospitals will not grant admitting privileges to doctors who perform abortions. The Pennsylvania bill has nearly identical language to the admitting-privileges requirement that passed last year in Texas. Since the passage of that requirement (and other abortion restrictions), many of the Lone Star State’s 41 abortion clinics have closed.

Some Pennsylvania women say they already have trouble accessing clinics. This week, a woman was sentenced to prison for ordering abortion pills online for her 16-year-old daughter, who did not want to have the baby. The Bloomsburg Press Enterprise reported that she ordered the pills because the daughter did not have insurance to pay for a hospital abortion and there were no clinics nearby.

Fortunately for abortion rights advocates, people familiar with Pennsylvania’s political scene say that the bill is doomed. “They did this before with one of those ultrasound bills and that died an ugly death too. As conservative as this Legislature can be, it seems to me to be seized by fits of common sense,” says John Micek, editorial and opinions editor for PennLive and the Patriot-News.

The legislation hasn’t gone to a vote yet and Cutler, who sponsored the bill, says that he doesn’t expect it to before the Senate session ends on November 12. He says he will consider reintroducing it next year.