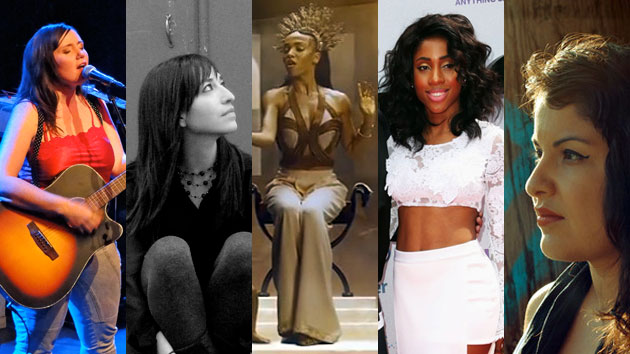 Summer’s pulling to a close, but perk up. Here are videos of five refreshing female vocalists whose smart and uncompromising performances have dazzled me recently:

Fans of the quirky alt-folk band the Be Good Tanyas—of which Frazey Ford is a founding member—won’t be disappointed with this sneak-peek single off Ford’s upcoming solo album, Indian Ocean, out in mid-October. With subtle vibrato and pulsing emotion, Ford’s velvety vocals take center stage in “September Fields.” While Ford’s a country-folk singer at heart, the electric organ in the track transforms her normally aching lullaby into something funkier and full of sunshine. As I listened, I kept picturing late summer drives through peaceful farm towns, passing barns with their paint peeling, peach stands framed by dry corn stalks, little girls in their Sunday best giggling on the steps of a small church. “Are you holding, holding on so tight?” Ford croons. Yes—to the edge of my seat in anticipation for her album to land.

One evening in July, Mexican singer Diana Gameros boarded the historic Balclutha, a tall ship parked in the San Francisco Bay. Under violet lights in the main cabin, alongside a handful of other masterful Latin American musicians, she delivered “Canciones Del Mar (Songs of the Sea).” The group performed ocean homages plucked from all over the continent, from fishing ditties to a silly tune about an octopus to a tribute to the Argentine poet Alfonsina Storni, who is said to have ended her own life by wading into the sea.

Gameros also performed her original, “Soy Tu Mar,” and released this humble video a month later. The waves washing through the ballad offer the singer an ethereal alternative rhythm, and pair well with her bright nylon-stringed Takamine guitar with a sound reminiscent of a mariachi. Gameros grew up bouncing between her hometown of Ciudad Juárez, Mexico, and Holland, Michigan, where she learned English and studied music. She now resides in the Bay Area and plays regularly at a tamale parlor in San Francisco’s Mission District. Her delicate first album, Eterno Retorno, showcases Gameros’ bilingual songwriting and jazzy voice. Like “Soy Tu Mar,” it’s at once full of yearning and serenity. Don’t miss the improvised bonus song in the tunnel at the end of the video.

Ignore the nails and revel in this diva’s silky and powerful voice. It baffles me that the guys lifting weights in the righthand corner of this scren were able to hold it together while Streeter just kills it.

With roots in church gospel music, Streeter started winning talent competitions at a young age, but her cousin had to convince her to upload her music to MySpace. It soon caught the eye of Beyoncé and Jennifer Lopez’s producer Rich Harrison, who asked Streeter to join RichGirl, a new pop group he was forming. The band never really took off, but Streeter continued to write songs, and six of the tracks she helped pen made it onto Chris Brown’s Grammy-winning album F.A.M.E.

Now, with an EP to her name, Streeter is working on a debut album. The singles out so far are gussied up with plenty of electronic beats and echo-y harmonies. But after seeing this video, I hope she releases more stripped-down acoustic tracks that allow her pure voice full reign.

Move over Gaga: FKA Twigs has arrived. This satisfyingly weird artist struts her sultry vocals and mesmerizing poise in the video version of “Two Weeks.” This year saw the London-based Twigs, a former backup dancer, move into the spotlight with her album LP1. Hipster music blog Pitchfork raves about its “eerie, post-humanist, Uncanny Valley-girl aesthetic.” Indeed, Twigs plays a doll in many of the surreal videos off this album—in “Water Me,” her head bobs from side to side and her eyes are unnaturally large.

In the video above, she’s an unapproachable empress. But amid all this cold posturing, her voice is piercingly intimate. And her command of her space and skilled restraint suggest that this 26-year-old half-Jamaican artist is only getting started.

Okay, this video’s not brand new. But Irene Diaz is probably new to most of you. I just stumbled on her recently (h/t NPR’s Tiny Desk Concerts), and I’m hooked on this playful song with its driving piano and flirtatious glances.

Based in Los Angeles, the soulful Diaz is just breaking into the national scene, playing at 2014’s SXSW and opening for Lila Downs’ on her current tour. Diaz seems like she’d be a ton of fun live—but here’s hoping she pauses from touring long enough to complete her first full-length album soon. As one blogger pointed out, Diaz sounds a bit like Fiona Apple, but her songs aren’t quite so morose. They’re muscular and catchy, with a hint of vintage spunk.