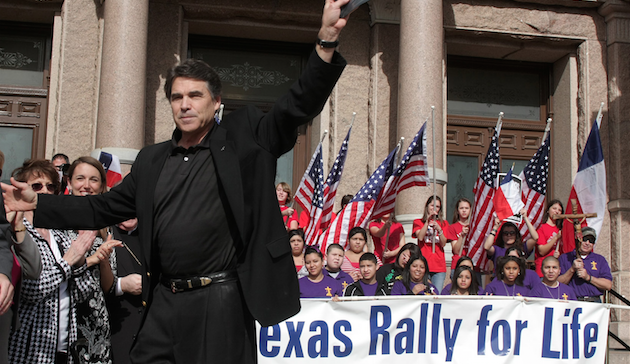 In the first six months of 2014, Texas paid a controversial marriage therapist named Vincent Rue $42,000 to prepare the state’s defense of a draconian anti-abortion law. It turns out that wasn’t such a great idea. On Friday, when US District Judge Lee Yeakel struck down part of that law, he slammed the state for hiring Rue—and for trying to hide Rue’s involvement.

“The level of input exerted by Rue undermines the appearance of objectivity and reliability of the experts’ opinions,” Yeakel wrote in his decision. “Further, the court is dismayed by the considerable efforts the State took to obscure Rue’s level of involvement with the experts’ contributions.” His decision blocked a portion of the law that would have closed all but about a half-dozen of the state’s abortion clinics.

Rue was thoroughly discredited as an abortion expert long before Texas hired him. When he testified in two landmark abortion cases in the 1990s, judges disregarded his testimony for being personally biased and lacking expertise. Mainstream medical organization have rejected Rue’s efforts to classify a supposed mental illness caused by abortion, “post-abortive syndrome.”

In Texas, Rue helped draft, edit, and find citations for the reports that the state’s experts witnesses submitted to the court.

“It amazes me that states continue to spend large amounts of taxpayer dollars outsourcing this work to this guy,” says Alexa Kolbi-Molinas, an attorney for the American Civil Liberties Union. Kolbi-Molinas was the lead attorney on a lawsuit in which Alabama hired Rue to defend its anti-abortion law. “But we basically have a road show now, of all of his experts.”

Rue’s involvement with the defense came out thanks to emails between Rue and the experts that plaintiffs brought up at trial. But lawyers for the Center for Reproductive Rights, the legal advocacy group which sued to block the law, accused Texas of withholding some of those emails. Yeakel appeared to agree. On the final day of the trial, he said the state had made “very disturbing” efforts to “effectively tried to hide Rue’s involvement,” the Austin Chronicle reported.

Yeakel ultimately discarded the testimony of four expert witnesses because of Rue’s “considerable editorial and discretionary control” over their written reports and testimony: James C. Anderson, the chair of Virginia Physicians for Life; Deborah Kitz, a health care consultant from Pennsylvania; Peter Uhlenberg, a sociologist at the University of North Carolina-Chapel Hill; and Dr. Mayra Jimenez Thompson, an OB-GYN and University of Texas-Southwestern professor.

Emails showed that that Rue sent Uhlenberg sources, “ideas,” and “fact changes.” In one message, Uhlenberg wrote, “I need your critical suggestions.” Kitz wrote Rue an email that said, “Tried to use as much of your material as I could, but time ran out.” Anderson testified that Rue was responsible for “wordsmithing” his report to the court. Rue has tapped Anderson as an expert witness in four other states that paid Anderson more than $110,000.

Rue, Kitz, Thompson, and Anderson did not respond to requests for comment. But Uhlenberg objected to the judge’s characterization of his testimony.

“He was wrong in asserting that Rue had considerable control over what I wrote in my expert report,” Uhlenberg wrote in an email. “That is insulting to me and not correct. I worked hard to provide a critical evaluation of what the experts for the plaintiffs wrote. If the judge wanted to know if this was my report, written by me, he could have asked.”

Here’s the full text of the footnote in which the judge discusses Rue:

The credibility and weight the court affords the expert testimony of the State’s witnesses Drs. Thompson, Anderson, Kitz, and Uhlenberg is informed by ample evidence that, at a very minimum, Vincent Rue, Ph.D, a non-physician consultant for the State, had considerable editorial and discretionary control over the contents of the experts’ report and declarations. The court finds that, although the experts each testified that they personally held the opinions presented to the court, the level of input exerted by Rue undermines the appearance of objectivity and reliability of the experts’ opinions. Further, the court is dismayed by the considerable efforts the State took to obscure Rue’s level of involvement with the experts’ contributions.

Yeakel is not the first judge to disregard Rue’s handpicked witnesses. In August, a judge who struck down an Alabama law requiring abortion providers to have admitting privileges with a local hospital tossed out Anderson’s testimony in favor of the law “due to concerns about his judgment or honesty.”