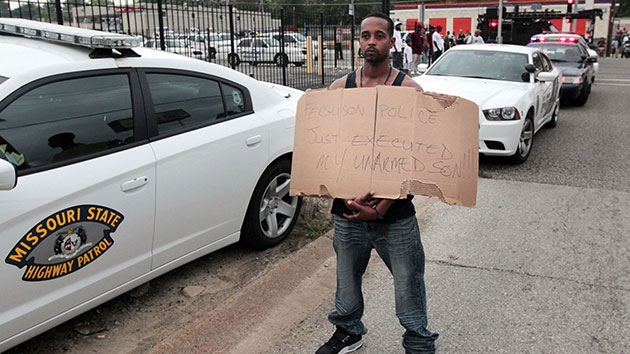 One consensus that’s emerged in the month since a police officer shot and killed unarmed teenager Michael Brown in Ferguson, Missouri: We have no way of telling exactly how often these types incidents occur on a national scale. The FBI’s database of justifiable homicides—in which some local law enforcement agencies voluntarily report how many alleged criminals died at the hands of police in the line of duty—has come under particular scrutiny for giving a very limited view of the use of lethal force by law enforcement across the country.

Here’s the data that shows police kill black people at a higher rate than white people.

But while many reports (from USA Today, Vox, FiveThirtyEight, and others) have rightly focused on the gaps in the FBI data, there’s a bigger question we seem to be glossing over: Would Brown’s death show up in that data to begin with?

A justifiable homicide, according to the FBI, is defined in two ways:

That raises the question: What is a felon? “A felon in this case is someone who is committing a felony criminal offense at the time of the justifiable homicide,” according to a statement provided by the bureau’s Uniform Crime Reporting staff. That definition differs from the common legal understanding of a felon as someone who has been convicted of a felony.

Felonies are usually understood as serious criminal offenses such as murder and assault. But what does the FBI count as a felony, then? “We do not have a standard definition for a felony criminal offense as this varies from law enforcement jurisdiction to jurisdiction,” the UCR staff states.

Let’s say a cop shoots and kills a suspect and later found to be justified in doing so because he felt his life was in danger. And let’s say that the local law enforcement agency later reports the death as a justifiable homicide to the FBI. Under the FBI’s definition, the victim is then counted as a felon killed by a peace officer in the line of duty, regardless of whether that suspect was in fact a criminal, or may have later been found innocent.

These loose definitions raise some important questions in the wake of Michael Brown’s death. Was Brown committing a felony when Officer Darren Wilson shot him, for instance? Ferguson authorities have claimed that Brown was a robbery suspect and that he assaulted Wilson prior to the shooting. But as is often the case with lethal use-of-force cases, the exact circumstances of Brown’s death remain in dispute. So long as the police have the final say, we’ll be stuck with unsatisfactory data that fails to give us the big picture on what happens when encounters with the law turn deadly.