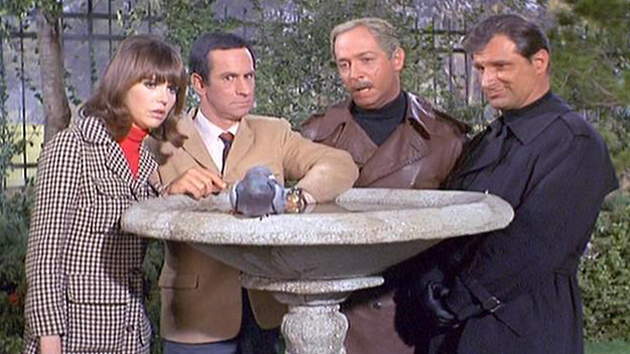 From the "Get Smart" episode "Spy, Spy Birdie."NBC

Within a trove of freshly declassified articles from Studies in Intelligence, the CIA’s in-house journal, we found a number of humor pieces based on the agency’s internal employee evaluations. Here is one such piece in its entirety, from the Spring 1984 issue. The author’s name was, naturally, redacted.

What follow are quotations from Performance Appraisal Reports that Mr. [redacted] compiled over the years, and for which he composed introductory comments. The quotations are rendered faithfully, with typographical and other errors intact, for they contribute to the fun. The subjects, supervisors, and reviewing officials mentioned and quoted in this compilation are to remain forever, and mercifully, anonymous.

The Golden Rule-Redux: “I believe that the readers of this PAR, as well as the previous one written by the Rating Officer, should know that the Rating Officer and I have had and continue to have many strong personal and professional differences of opinion. He believes, for example, that I have reached my level of competency, and I believe that he has exceeded his.”

Mastering the surprise ending: “It should be recognized that by employing the proper technique, very comfortable shoes can be made from a sow’s ear but making [redacted] silk purse requires an entirely different raw material.”

Making no bones about it-in the vernacular: “Subject is also responsible for all Headquarters support of a complex covert action operation aimed at maintaining the political stability of a regime headed up by a weirdo who goes around saying things like ‘dat get me shame’.”

When faint praise is called for: “Operationally, Subject was not loafing.”

For one who skates well on thin ice: “Subject is quick to spot thin stuff and do something about it—particularly when it comes to good operational tradecraft.”

Growth Potential: “As the period drew to a close, Subjects apparatus had begun taking shape… “

Being hugely successful: “He largely recruited a high level source.”

Almost flawless—so to speak: “His English is flawless, if not close to it.”

When in doubt clutter things up; its good for cover: “He characteristically complicates simple things.”

The smiling, freely offered thumb in the eye: “One thing not noted previously is his calm and pleasant demeanor which tends gratuitously to mask his toughness as a case officer.”

The clairvoyant case officer: “…His operational reporting is often on time, often ahead of time.”

Then there’s this little QP drummer: “He marches to the beat of his own drummer.”

Although not a hot-head: “This officer has a warm mind.”

His eyes are clear but his prose is measured and smoke-watered: “With the perspective of twenty months of overview of his long march, rather than with the smoke-watered eyes of those who peer too closely into his campfire, I conclude that his pace has been measured.”

Although an off-quay visionary he can trumpet, and drum, and stomp his foot all at the same time: “He has been like a one-man band trying to cover the waterfront on a far frontier.”

The hyperactive dog of a case officer: “…He is a man of constant motion—some of it unnecessary…he bloodhounds even the longest odds and opportunities.”

Although some may wonder: “All said and done, Mr. S. is human.”

When tippling leads to being Freud, and the naked truth must be revealed: “At the right psychological moment he unfrocked himself in [redacted] cafe.”

The crawl-on-your-belly-and-hiss approach: “…a target of opportunity whom he approached in his own inimical style.”

Standing tall in the Lilliput of Liaison: “Due to his height this man should probably be directed along liaison lines or staff work.”

The runaway case officer: “He is not only a self-starter but a self-goer—at times tending to go too fast.”

Unless one speaks quietly and carries a big stick: “The operational carrot is easily lost sight of and is difficult to catch.”

The Case of the Abandoned Suitcase: “He began to pursue ops leads as soon as his suitcase hit the ground.”

The cape-and-dagger jock: “He involves himself athletically in Base and local activities.”

The strong tryer: “I would rate his effort to do the job as strong.”

When finishing working hard on his syntax… “He at least secured his own housing on which he has been working hard to fix up.”

The monosyllabic hot dog: “His performance has been-WOW”

The musty Middle East: “This officer has been associated long enough with Arab affairs. He now needs fresh air.”

The gritty performer: “This officers performance has been outsanding.”

The Compleat hard target Case officer: “He is a hard-nosed supervisor and a hard-headed officer.”

Besieged, bothered and bewildered: “He has reached a standoff with the bureaucracy around him.”

The operational arsonist: “Subject has kept the target fires burning.”

When aptitude isn’t apt: “His apptitude for spelling is poor.”

When he’s not plodding he Lies down, humps his back and makes himself small: “He is steady and defendable.”

Because his compass came in his air freight… “It took the officer less than one week after his arrival here to get his bearings.

Just give him a tune-up, but don’t touch the cheerful plugs: “He tries hard in a situation that has him more stymied than most of us, and he plugs along cheerfully.”

To be some kind of mixed up butterfly… “He needs to get the operational chrysallis out of the political coccoon it is in.”

He trembles at dullness, but— “He confidently attends all sorts of events of interest.”

The wary grunter: “He gives a negative first impression, primarily because he is inarticulate.”

When the anatomy of an Advance Work Plan is necessarily obscure: “Mr. S. has had supervisory responsibility for parts of two I.A.’s…”

Not risking over confidence: “He can look back at this job as ‘pretty well done’.”

The little engine with the retarded spark: “During the reviewing period this officer has made good use of the limited intelligence resources available to him.”

Somewhere down there is gold; it just doesn’t pan out: “Subject probably has much good in him. Somehow, though, it has not come through.”

In addition to avoiding prickly confrontations… “Subject is not one to sit on his laurels.”

Migratory fixation: “I am looking forward to the next reviewing period when the birds will come home to roost.” (next FR) “They have, and they have settled on the highest branches.”

Seen through a glass darkly: “Insofar as I am able to comprehend it, I have no quarrel with the substance of the rating officer’s comments.”