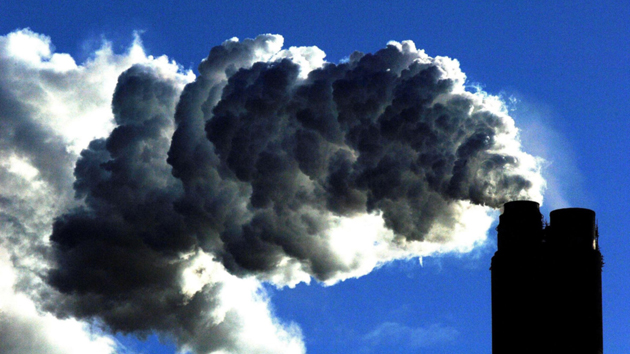 Yesterday was a good day for the climate movement, as over 300,000 people—according to the event’s organizers—descended on Manhattan for the biggest climate change march in history. The record-breaking turnout was a powerful sign that climate change is gaining traction in mainstream consciousness.

But even as the marchers were marching, new science was released that underscores how just how little time the world has left to break its addiction to fossil fuels. Global carbon emissions are the highest they’ve ever been, and are on the rise, according to a new climate study published in Nature Geoscience over the weekend.

The study totaled global carbon emissions from fossil fuel combustion and cement production—which together account for over 90 percent of total emissions—and found that they rose 2.3 percent in 2013 to their highest level ever recorded, approximately 36.1 metric gigatons.

We’ll use up our remaining carbon “budget” in the next 30 years.

Emissions have been on the rise for decades, setting a new record almost every year. The rate of emissions growth has increased since the 1990s—when it was 1 percent per year—to the last decade, when the average annual growth rate has been around 3 percent. The rate of growth in 2013 was actually slower than in 2012, the study found, reflecting energy efficiency improvements in the US and Europe that have reduced the amount of carbon emitted per unit of GDP. But that obscures increasing rates of growth in emissions from China and India. Globally, greenhouse gas emissions are still on pace to trigger what scientists say could be a catastrophic amount of warming, said Pierre Friedlingstein of the University of Exeter, the study’s lead author.

“China will be twice as much in 10 years,” Friedlingstein said. “We need to change the trend. There’s a need to reduce emissions in every country.”

Which brings us to the really unsettling part of this report—its attempt to pin down exactly how long we have to make that happen. Climate scientists often talk about a carbon “budget,” which is the total cumulative emissions that will lead to a specified level of global warming. To have a better-than-even chance to stay within a 3.6 degree Fahrenheit increase over 1990s temperatures, the international standard for a reasonably safe level of warming, our global carbon budget is 3,200 gigatons. Since the Industrial Revolution, we’ve used up about two-thirds of that. On our current path, the study finds, we’ll use up the rest in just the next 30 years.

In other words, if the emissions trend isn’t reversed before 2045, we would have to drop immediately to zero carbon emissions on the first day of 2046. Since an instantaneous gearshift like that is obviously impossible, there’s a need to bring emissions under control in the short term. That way we can stretch the “budget” for many more years and not face a choice between catastrophic climate change or a plunge into the Dark Ages.

We’ll get an updated sense of how serious world leaders are about that goal at tomorrow’s United Nations climate summit, which is meant as a curtain-raiser for major international climate negotiations next year in Paris.