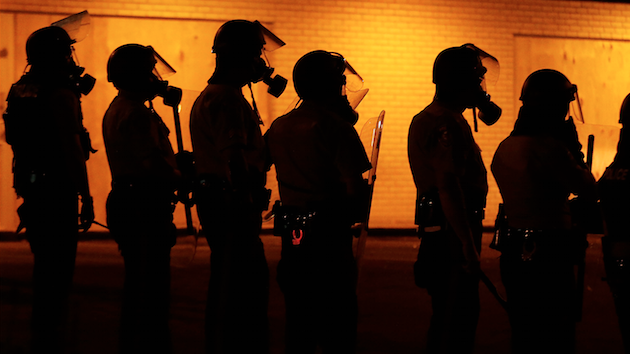 The peaceful protests in Ferguson, Missouri, descended into pandemonium on Sunday night just hours before the start of a curfew imposed by Gov. Jay Nixon. This morning, it remains unclear what stoked the chaos. Captain Ron Johnson of the Missouri Highway Patrol accused protesters of deliberately provoking the police with gunfire and Molotov cocktails. Protesters deny that anyone attacked the police.

What is clear is that Sunday night saw the greatest show of force since the start of the protests. The Missouri Highway Patrol, which replaced local police forces after those officers drew criticism for their aggressive stance toward demonstrators and journalists, fired rubber bullets into the crowd and marched in formation against protesters.

Photos and shaky video from the scene show tear gas and smoke streaming through disoriented crowds and police in riot gear lining up against citizens. Police ordered television news crews to turn off their lights, according to the St. Louis Post-Dispatch, and responded to a fire at a local store that appeared to have been set by looters. There are reports that violence broke out between civilians and that some civilians shot at police. Antonio French, a St. Louis alderman who has helped lead the protests, addressed those reports on Twitter:

These people are not protestors. This is something different and it has little to do with #JusticeForMikeBrown.

The clash began at about 9 p.m. on West Florissant Avenue, a short walk from the spot where Michael Brown was slain by a police officer. Hours later, news broke that a preliminary autopsy of Brown revealed that the unarmed 18-year-old had been shot six times. Brown’s death, on August 9, inspired the protests after police withheld details about the shooting. The Department of Justice plans its own autopsy. 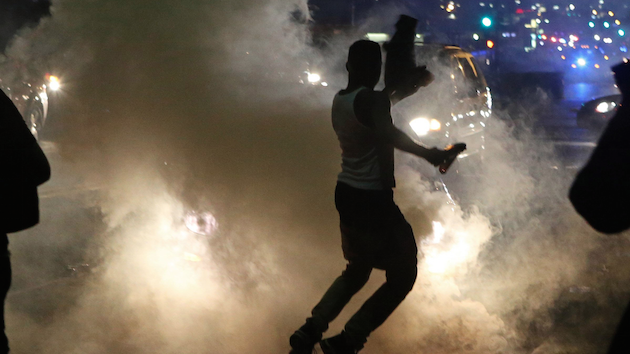 By about midnight last night, Ferguson’s streets were empty of protesters. Time‘s Alex Altman watched demonstrators return to the scene of the chaos just after dawn this morning and clean up broken bottles and empty shell casings. French posted a photo of the clean-up this morning:

Nixon announced early Monday morning that he would deploy the state’s National Guard to take control of the town. Civil rights groups, including the NAACP and American Civil Liberties Union, have called on the governor to roll back the curfew. The groups say the curfew “suspends the constitutional right to assemble by punishing the misdeeds of the few through the theft of constitutionally protected rights of the many.”

Many photos show McDonald’s workers washing a protester’s eyes out with milk after the woman, Cassandra Roberts, was tear-gassed by police. “I just came down here to support my people,” Roberts told reporters. “What the hell is going on in this world?”

Police continued their aggression toward journalists on the scene. Chris Hayes, the MSNBC host, tweeted:

If you walk about 100 feet from OK’ed press area you find yourself lit up by a spotlight and a squad of police on hair trigger.

Robert Klemko, a journalist for Sports Illustrated, reported that he was told by Missouri Highway Patrol Captain Ron Johnson to “walk away or be arrested.” Klemko walked away—and was arrested:

When they cut cuffs off minutes later, I held onto it. Johnson tried to take it. I said “it’s a ferguson souvenir.” pic.twitter.com/89t6G49FId

Video posted on YouTube reportedly shows police yelling at a member of Argus Radio, a volunteer-run music station that has been live streaming the protests, to “get the fuck out of here and keep that light off or you’re getting shelled with this.”