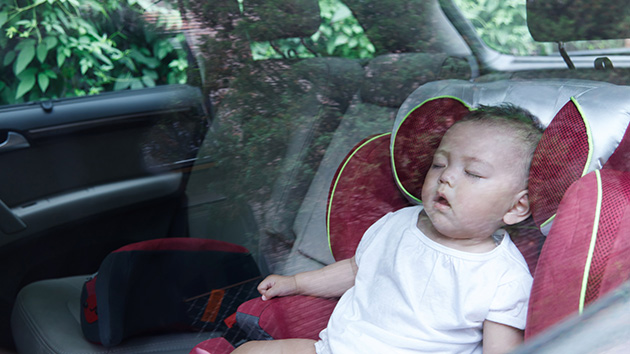 Should you automatically go to jail for leaving your kid alone in the car? That question has gained new attention since the arrest of Shanesha Taylor, an unemployed single mom who left her two young children in her vehicle during a 45-minute job interview in Scottsdale, Arizona. After her arrest, Taylor’s tearful mugshot elicited broad sympathy. Yet the temperature inside Taylor’s car that afternoon had risen above 100 degrees and her kids were crying and profusely sweating. (The prosecutor agreed to dismiss the child abuse charges against Taylor.)

While Taylor’s case may have been unusual, what parent hasn’t contemplated the pros and cons of extracting a napping baby from a car seat just to dash into a convenience store? Leaving a kid in a locked, parked vehicle in the shade is usually pretty safe. However, it’s definitely a bad idea to leave your kid unattended in a car for more than a few minutes on a hot day. Last year, at least 39 children died from heatstroke in vehicles; 21 have died so far this year. The interior of a car left in 80-degree heat with the windows rolled up can reach 120 degrees in less than an hour. Cracking the windows doesn’t always cool the car down. Small kids more easily succumb to heatstroke, which can kick in when the body’s internal temperature reaches just 104 degrees.

Whether leaving a child unattended in a car is a crime largely depends on where you live. Twenty states have laws addressing the issue. Only Louisiana, Maryland, and Nebraska outright ban the practice, though they differ on the definition of a child and a suitable guardian to stay in the car. Kids can remain in unattended vehicles for no more than five minutes in Hawaii, Texas, and Utah; you get 10 minutes in Illinois and 15 minutes in Florida. Laws in several other states, including California, specify that children can’t be left in a vehicle in dangerous conditions such as hot weather.

Here’s a map of all the current kids-in-cars laws:

States without kids-in-cars laws still may prosecute parents under child endangerment statutes, which can be interpreted in wildly different ways. A New Jersey appellate court recently found a woman who'd left her 19-month-old in her car for less than 10 minutes (with the windows cracked) guilty of child abuse. "A parent invites substantial peril when leaving a child of such tender years alone in a motor vehicle that is out of the parent's sight, no matter how briefly," wrote a three-judge panel. The ruling, which was mocked in a Newark Star-Ledger op-ed as an embodiment of the "Busybody State," will be reviewed by the state supreme court.

"The assumption is that any time a child is unsupervised, they are going to die, and that goes 20 times for a kid in a car."

Lenore Skenazy, the author of Free-Range Kids, argues that public concern for the safety of unattended kids has escalated to the point of hysteria. She has heard dozens of stories of parents chastised by onlookers for, say, stepping away from a car full of kids to drop off a letter, return a shopping cart, or grab a cup of coffee. "The assumption is that any time a child is unsupervised, they are going to die," Skenazy says, "and that goes 20 times for a kid in a car."

Ideally, police would arrest parents in such situations only if their kids are clearly in serious danger. But that's not always what happens. It's not clear how many parents are arrested for leaving their kids unsupervised in cars, but a search for stories published in the past two years turned up dozens of cases like these:

Bastrop, Louisiana/February 2013: A teenager left an infant in a car on a "cool day" for approximately two minutes while shopping at a clothing store, according to the Bastrop Daily Enterprise. He was arrested and charged with child desertion.

Bettendorf, Iowa/June 2013: A mother left an infant in a car during an early morning exercise class. According to the police report, the woman repeatedly stepped out of the hourlong class to check on the child. She was arrested and charged with child endangerment.

Yorktown, New York/October 2013: A father left a two-year-old boy in a car at a CVS parking lot for "several minutes," according to the Daily Somers Voice. He was arrested and charged with endangering the welfare of a child.

Columbus, Indiana/June 2014: A father left a one-year-old and seven-year-old in a car with the windows cracked and the sunroof open for about 10 minutes while shopping at Kroger. He told an officer that he'd left the kids behind because the seven-year-old wasn't wearing shoes. He was arrested and charged with child neglect.

Jacksonville, Florida/July 2014: A father left a seven-year-old boy in a car parked in the shade with the windows down outside a furniture store where he was a janitor. He was arrested and charged with child neglect. (Florida's kids-in-cars law only applies to children younger than six).

While some of these news stories might have omitted important details, a pattern clearly emerges of parents arrested for behavior that falls far short of what's usually considered child abuse. The risk of a child succumbing to heatstroke when left in a car under normal conditions for 10 or 15 minutes is vanishingly small. "I could not find any instance of any person dying in the car in the course of a short errand," says Skenazy, who has scrutinized kids-in-cars arrests for years. And adults who intentionally leave their kids in their vehicles for longer periods are not even the biggest problem: 80 percent of kids who die in parked cars were forgotten by their parents or entered the car without their parents' knowledge.

A child has a much greater chance of getting struck by lightning than being snatched from a parked car.

Adults who park their kids in the shade and roll the windows down or leave the air conditioner running with the keys in the ignition may be accused of leaving tempting targets for kidnappers. But arresting a parent for ignoring the hypothetical risk of a child predator, as happened in Charleston, South Carolina, in June, makes about as much sense as jailing her for feeding a kid solid food, letting him ride a bicycle, or allowing him to walk down a flight of stairs. In 1999, the last year for which comprehensive statistics are available, 115 of America's 72 million children were kidnapped by strangers. (That's all kidnappings, not just from cars.) That puts the risk of a child getting kidnapped in any given year at 0.0002 percent. A child has a much greater chance of getting struck by lightning at some point in his lifetime.

These arrests seem doubly unfair when they involve parents struggling to make ends meet with no better child care options. Is the seven-year-old son of the janitor in Jacksonville better off now that his dad is in jail? How about the baby left in a car at 8 a.m., shielded from the sun, with the windows cracked and sunroof open, while her mom took a final exam for cosmetology school? Or the mother who left her two kids in the car while she donated blood plasma to get gas money? Arguably, these arrests represent the criminalization of the working poor—though more affluent parents aren't immune to getting cuffed in the course of buying lattes or picking up the dry cleaning.

Skenazy sees many kids-in-cars laws as counterproductive. "The risk is so tiny that to start legislating on the basis of it would mean that you have to start legislating on everything," she says. "We focus on the danger of the kid in the parked car, and nobody ever goes through the same paroxysms of fear and hand-wringing and anger when the mom or dad puts the child in the car to drive somewhere, even though that is the No. 1 way children die. It's in moving cars while they are being driven somewhere by the parents who love them. Why don't we say to parents: 'Why did you take them with you? Couldn't you have found a babysitter and then gone to the grocery? Couldn't you have had your groceries delivered by a neighbor?'"

"We're not really concerned about the real ways kids die," she adds. "We're concerned about being mad at parents who don't believe they have to be with their kids every single second of the day."

So what is a reasonable onlooker supposed to do when confronted with an unattended kid inside a parked car? Consider the context, Skenazy says. Is it a grocery store parking lot where the parent will probably soon return, or an office park where everybody goes to work for the day? Is there another option short of calling the cops? "A Good Samaritan is looking out for the child. But they are also looking out for the mom," Skenazy says. "They are not the KGB."