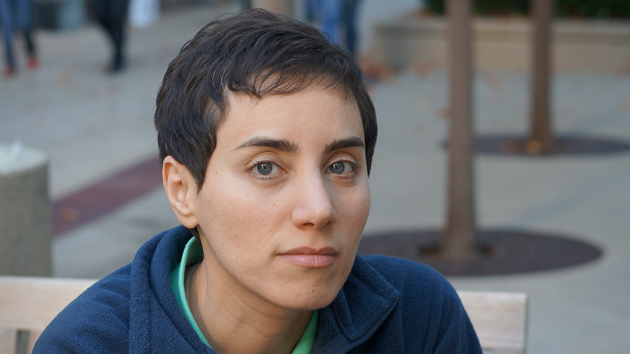 On Wednesday, Maryam Mirzakhani became the first woman in 78 years to be awarded the prestigious Fields Medal, considered the highest honor in mathematics. She was selected for “stunning advances in the theory of Riemann surfaces and their moduli spaces.”

The Fields Medal is awarded every four years by the International Mathematical Union to outstanding mathematicians under 40 who show promise of future achievement. With the announcement of Mirzakhani and this year’s other awardees—Arthur Avila, Manjul Bhargava, and Martin Hairer—there now have been 54 male and 1 female medalists.

Many hope Mirzakhani’s Fields medal is a sign of change to come. “I will be happy if it encourages young female scientists and mathematicians,” she said in a press release. Christiane Rousseau, vice president of the International Mathematics Union, told the Guardian this is “an extraordinary moment” and “a celebration for women,” comparable to Marie Curie’s barrier-breaking Nobel prizes in physics and chemistry in the early 20th century.

And as Canadian math professor Izabella Laba wrote: “Mirzakhani’s selection does exactly nothing to convince me that women are capable of doing mathematical research at the same level as men. I have never had any doubt about that in the first place…What I take from it instead is that we as a society, men and women alike, are becoming better at encouraging and nurturing mathematical talent in women, and more capable of recognizing excellence in women’s work.”

Mirzakhani’s accomplishment is all the more groundbreaking in light of the well-documented disadvantages and biases women face in math and science. According to the National Academy of Sciences, there are no significant biological differences that could explain women’s low representation in STEM academic faculty and leadership positions (although that doesn’t stop prominent people from making claims otherwise.) Instead, NAS says we can thank bias and academia’s “outmoded institutional structures.”

For example, in a 2008 Yale study, professors were asked to rate fictional applicants for a lab manager position. When given an application with a male name at the top, professors rated the candidate more competent and hirable than when given an otherwise identical form with a female name. This bias was found in both male and female faculty members.

And that’s not all women in STEM fields have to contend with: A July report found that a full 64 percent of women in various scientific fields were sexually harassed while doing fieldwork.

These disadvantages—along with a history of men getting the credit for discoveries and inventions made by women—help explain why only 9 to 16 percent of tenure-track positions in math-intensive fields at the top 100 US universities are held by women. According to the American Mathematical Society, the share of women earning Ph.D.s in math has remained stagnant for decades:

(Additional AMS data used in the above chart found here.)

Mirzakhani, who grew up in Iran before earning her Ph.D. at Harvard and becoming a professor at Stanford, told the Clay Mathematics Institute in 2008 that she did not initially realize her strength in math: “I don’t think that everyone should become a mathematician, but I do believe that many students don’t give mathematics a real chance. I did poorly in math for a couple of years in middle school; I was just not interested in thinking about it. I can see that without being excited mathematics can look pointless and cold.”