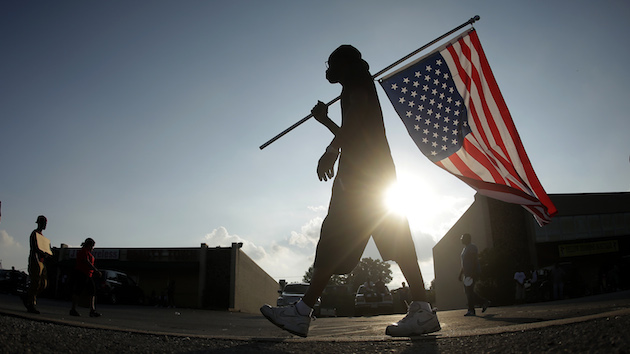 Duane Merrells walks with an upside down flag in a protest Monday, Aug. 18, 2014, for Michael Brown.Charlie Riedel/AP Photo

Over the last couple days, voter registration booths have been popping up in Ferguson. There was one by the ruined site of the recently burned-down QuikTrip convenience store, which has become a central gathering site of the protests, and another near the site where Michael Brown was shot.

Voter turnout was just 12 percent in Ferguson’s last municipal election, and in a city that’s 60 percent black, virtually all city officials are white. In December, the black superintendent of the Ferguson-Florissant school district was fired by the then all-white school board, and the longtime St. Louis county executive, who is black, recently lost his seat to a white opponent in a race seen as “racially charged.” “Five thousand new voters will transform the city from top to bottom,” said Jesse Jackson Sr., who told the St. Louis Post-Dispatch on Monday that he was meeting with local clergy to organize a door-to-door voter registration drive.

But the prospect of more registered black voters has greatly perturbed the executive director of Missouri’s Republican Party, Matt Wills, who expressed outrage at the new registration booths to Breitbart News Monday:

“If that’s not fanning the political flames, I don’t know what is,” Wills said. “I think it’s not only disgusting but completely inappropriate…Injecting race into this conversation and into this tragedy, not only is not helpful, but it doesn’t help a continued conversation of justice and peace.”

While some on Twitter echoed Wills’ sentiments and painted the voter efforts as Democratic opportunism, other political leaders in Missouri distanced themselves from Wills’ comments. Republican state Sen. Ryan Silvey of Kansas City tweeted, “I have no problem w/ protesters, or anyone, getting registered to vote. How do we keep our gov’t accountable if not by ballot?” And he had more to say later:

Ok, I’m sorry to come back to this again, but the “outrage” over voter registration in #Ferguson is dumb. I’d rather they vote than riot.

In April, an editorial in the Kansas City Star denounced “cheap” tactics by the Missouri GOP to “make voting more difficult for certain citizens, who are most likely to be elderly, low-income, students or minorities. They’re not even subtle about it.” A proposed amendment to the state constitution would require photo ID at the polls, and a proposal to bring early voting to Missouri would disallow it on Sundays—a big day for black voters. The Star pointed out that the photo ID law would cost the state over $6 million next year, “a huge cost, especially because Republicans have been able to produce zero examples of voter identity fraud in Missouri.” In fact, as my colleague Kevin Drum has exhaustively reported, incidents of voter fraud anywhere in the country are microscopically few; the New York Times found just 86 cases from 2002 to 2006, for instance.

“Elected officials don’t have to care about black citizens as long as they don’t fear them at the ballot box,” Dorothy A. Brown, a professor of law at Emory University’s School of Law who’s written a book on race and the law, noted on CNN.com last week. If anything, the Missouri GOP may be on track to increase the number of voters determined to put that notion into practice.