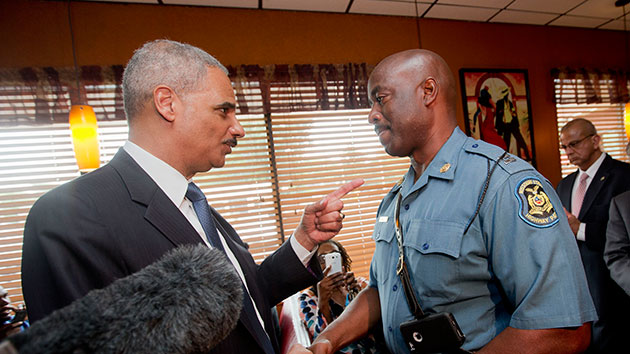 Update March 3, 2015: The New York Times and others report that the Justice Department has concluded its civil rights investigation into the Ferguson Police Department. The DOJ accused Ferguson officers of routinely exercising racial bias and excessive force, and making unjustified traffic stops for years. The full report is expected on March 4. A separate DOJ investigation into Ferguson Officer Darren Wilson is expected to clear him of criminal wrongdoing.

On August 11, the Department of Justice announced that FBI agents were working with attorneys from the Civil Rights Division and US Attorney’s Office to conduct what Attorney General Eric Holder promised would be a “thorough and complete investigation” into the death of Michael Brown in Ferguson, Missouri. Since then, more than 40 FBI agents have arrived in the St. Louis suburb to interview witnesses and canvas the neighborhood where Brown was shot by a police officer on August 9.

The following week, the AG himself arrived in Ferguson for a series of meetings with federal investigators, local authorities, and community members. Writing in the St. Louis Post-Dispatch, Holder said, “At a time when so much may seem uncertain, the people of Ferguson can have confidence that the Justice Department intends to learn—in a fair and thorough manner—exactly what happened.”

What exactly happens when the feds step in to investigate a case like Michael Brown’s? A quick explainer:

What is the Justice Department investigating? Holder initially announced that the DOJ is specifically investigating “the shooting death of Michael Brown,” and “looking for violations of federal, criminal civil rights statutes.” The investigation is separate from local authorities’ investigation. Some have asked the DOJ to take a broader view: In a letter to Holder on August 11, Reps. John Conyers Jr. (D-Mich.), Marcia L. Fudge (D-Ohio), and William Lacy Clay (D-Mo.) asked the DOJ to consider expanding the scope of its investigation to include “the potential for any pattern or practice of police misconduct by the Ferguson Police Department.” Meanwhile, the US Commission on Civil Rights, a panel appointed by the president and members of Congress, has asked the DOJ to look into the disproportionately low representation of African Americans on Ferguson’s police force and city council. On September 3, a federal and Missouri official told CNN that the DOJ will also investigate complaints involving Ferguson police and how the department operates, to determine whether it is compliant with federal standards.

What could happen as a result of the DOJ investigation? The findings of the investigations could lead to a federal prosecution against Ferguson police officer Darren Wilson, who shot and killed Brown.

Who is conducting the investigation? So far, three branches of the DOJ are working together on the federal investigation. More than 40 FBI agents from the St. Louis field office are canvassing the area and interviewing witnesses. They’re working with the Civil Rights Division and the US Attorney’s Office, which would handle a potential prosecution. Within the Civil Rights Division, two sections appear to be involved: There’s the Criminal Section, which “prosecutes cases involving the violent interference with liberties and rights defined in the Constitution or federal law,” including excessive use of force by police officers; also, the Special Litigation Section conducts investigations into systematic violations of civil rights by state and local institutions, including police departments. The Criminal Section launched the initial investigation into the death of Michael Brown.

Cards being handed out by FBI #Ferguson #MikeBrown pic.twitter.com/ahspShTOMj

What triggered the investigation? Generally, DOJ investigations into civil rights violations can begin in response to an official complaint filed with the Civil Rights Division, or in response to major events like those in Ferguson. The CRD has not said if there was an official complaint filed by citizens, or if the department decided to initiate the investigation on its own. “There’s no rule book” that the department follows to determine if a case warrants an investigation, explains Samuel Walker, a criminal-justice scholar at the University of Nebraska-Omaha. The Civil Rights Division doesn’t announce all of its investigative activities. The agency has not responded to a request for comment on what percentage of incoming complaints it decides to investigate, and why. But back in 2012, then-DOJ spokeswoman Xochitl Hinojosa told my colleague AJ Vicens that “the department investigates each jurisdiction based on the allegations received. There is no one-size-fits all approach to our investigations or our settlements.”

Where else besides Ferguson is the DOJ investigating civil rights violations? The Civil Rights Division’s Special Litigation Section is currently investigating systematic violations of civil rights by law enforcement in at least 34 other jurisdictions across 17 states plus the District of Columbia, Puerto Rico, and the Virgin Islands, according to a list on the DOJ website. But these cases are different from the investigation in Ferguson, which so has been focused on Wilson’s shooting of Brown, which falls under the purview of CRD’s Criminal Section. A new investigation into department-wide practices would fall under Special Litigation. According to its website, the Special Litigation Section can step in “if we find a pattern or practice by the law enforcement agency that systemically violates people’s rights. Harm to a single person, or isolated action, is usually not enough to show a pattern or practice that violates these laws.” The Criminal Section, meanwhile, lists 17 past investigations into criminal misconduct by law enforcement officials in 11 states.

The Justice Department’s Office for Civil Rights, which is separate from the Civil Rights Division, monitors discrimination in DOJ-funded state and local law enforcement institutions. In a May 2013 memo, OCR reported that over the previous four years, it handled 346 discrimination complaints, many of them alleging that federally funded law enforcement agencies “engaged in unlawful racial profiling in conducting traffic stops.”

Since when does the DOJ investigate civil rights violations? The Violent Crime Control and Law Enforcement Act of 1994 authorizes the Civil Rights Division’s Special Litigation Section “to review the practices of law enforcement agencies that may be violating people’s federal rights,” and oversees cases involving discrimination—prohibited under Title VI of the Civil Rights Act of 1964—in state or local agencies receiving federal funds. As a result of these special litigation cases dating back to 1997, the St. Louis Post-Dispatch reports that 21 police departments across the country have signed consent agreements with the DOJ to improve their procedures and policies, often the use of force and relationships with minority communities. Samuel Walker says that the number of these cases fell dramatically during the Bush administration, but picked back up under the Obama administration, which has doubled the size of the special litigations unit. While criminal civil rights prosecutions under the DOJ date back to 1939, the Criminal Section’s powers were limited until the Civil Rights Division was created in 1957 as part of the Civil Rights Act.

How else is the DOJ involved in Ferguson? Holder has announced that the DOJ’s COPS (Community-Oriented Policing Services) office and Office of Justice Programs are also assisting local authorities “in order to help conduct crowd control and maintain public safety without relying on unnecessarily extreme displays of force.” It’s unclear how this assistance has played out on the streets of Ferguson. Holder added that Justice Department officials from the Community Relations Service are also helping “convene law enforcement officials and civic and faith leaders to plot out steps to reduce tensions in the community.”

When will we see some results from the investigation? It may be a while. As Holder wrote in Wednesday’s St. Louis Post-Dispatch, “Long after the events of Aug. 9 have receded from the headlines, the Justice Department will continue to stand with this community.” For now, there are many more questions than answers.