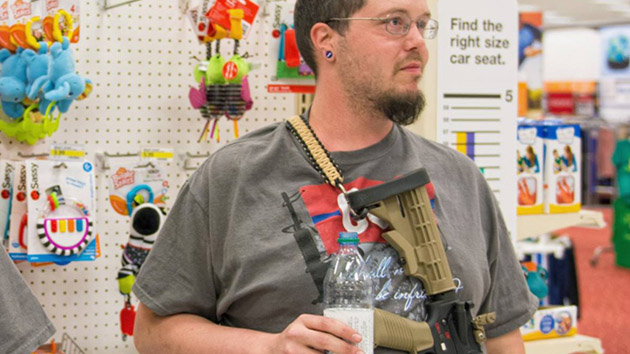 A month after images first surfaced of pro-gun activists flaunting semiautomatic rifles at Target stores, the retailer has become the latest US company to officially reject firearms in its outlets.

“Our approach has always been to follow local laws, and of course, we will continue to do so,” Target said in a statement Wednesday. “But starting today we will also respectfully request that guests not bring firearms to Target—even in communities where it is permitted by law.”

The move follows weeks of pressure from Moms Demand Action for Gun Sense in America, which used social media, online petitions, and protests at Target stores to call for such a change.

Still reeling from its disastrous failure to secure customers’ personal data, Target leaders “were really nervous” after the gun issue emerged, a person with direct knowledge of the company’s discussions about it told me. “This was the last thing they needed.” Still, the company endured weeks of negative attention on the issue, even as Texas authorities and one of Target’s corporate strategic partners made clear that Target was trying to stop the guns from coming in.

Target joins a growing list of corporations—including Starbucks, Jack in the Box, Chipotle, Sonic, and Chili’s—that have reacted to demonstrations by open-carry activists by announcing that they don’t want people carrying guns on their premises.

Whether open-carry activists will comply with Target’s request appears to be an open question. One of the first to comment on Target’s posted statement was Kory Watkins—a leader of a Texas open-carry group that’s conducted provocative demonstrations, used disturbing intimidation tactics against women, and harassed a Marine veteran—who said he plans to pack heat at Target “today and tomorrow and whatever days I want.”

Carrying rifles on display in public is legal in Texas, although regulations governing Target’s sale of alcoholic beverages forbid guns on their premises, and armed patrons who don’t leave upon request could be subject to criminal trespassing charges, according to the Texas Alcoholic Beverage Commission.

For more of Mother Jones’ award-winning reporting on guns in America, see all of our latest coverage here, and our special reports.