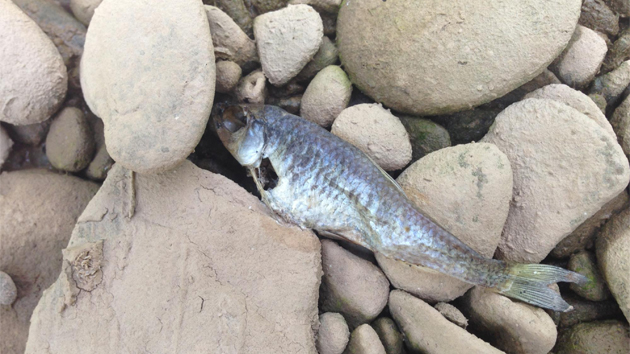 A dead fish near the site of the recent fracking-chemical spill in Monroe County, Ohio.Courtesty of the Ohio Environmental Council

On the morning of June 28, a fire broke out at a Halliburton fracking site in Monroe County, Ohio. As flames engulfed the area, trucks began exploding and thousands of gallons of toxic chemicals spilled into a tributary of the Ohio River, which supplies drinking water for millions of residents. More than 70,000 fish died. Nevertheless, it took five days for the Environmental Protection Agency and its Ohio counterpart to get a full list of the chemicals polluting the waterway. “We knew there was something toxic in the water,” says an environmental official who was on the scene. “But we had no way of assessing whether it was a threat to human health or how best to protect the public.”

This episode highlights a glaring gap in fracking safety standards. In Ohio, as in most other states, fracking companies are allowed to withhold some information about the chemical stew they pump into the ground to break up rocks and release trapped natural gas. The oil and gas industry and its allies at the American Legislative exchange Council (ALEC), a pro-business outfit that has played a major role in shaping fracking regulation, argue that the formulas are trade secrets that merit protection. But environmental groups say the lack of transparency makes it difficult to track fracking-related drinking water contamination and can hobble the government response to emergencies, such as the Halliburton spill in Ohio.

According to a preliminary EPA inquiry, more than 25,000 gallons of chemicals, diesel fuel, and other compounds were released during the accident, which began with a ruptured hydraulic line spraying flammable liquid on hot equipment. The flames later engulfed 20 trucks, triggering some 30 explosions that rained shrapnel over the site and hampered firefighting efforts.

Officials from the EPA, the Ohio EPA, and the Ohio Department of Natural Resources (ODNR) arrived on the scene shortly after the fire erupted. Working with an outside firm hired by Statoil, the site’s owner, they immediately began testing water for contaminates. They found a number of toxic chemicals, including ethylene glycol, which can damage kidneys, and phthalates, which are linked to a raft of grave health problems. Soon dead fish began surfacing downstream from the spill. Nathan Johnson, a staff attorney for the non-profit Ohio Environmental Council, describes the scene as “a miles-long trail of death and destruction” with tens of thousands of fish floating belly up.

Statoil and the federal and state officials set up a “unified command” center and began scouring a list of chemicals Halliburton had provided them for a compound that might be triggering the die off. But the company had not disclosed those ingredients that it considered trade secrets.

“We knew there was something toxic in the water. But we had no way of assessing whether it was a threat to human health or how best to protect the public.”

Halliburton was under no obligation to reveal the full roster of chemicals. Under a 2012 Ohio law—which includes key provisions from ALEC’s model bill on fracking fluid disclosure—gas drillers are legally required to reveal some of the chemicals they use, but only 60 days after a fracking job is finished. And they don’t have to disclose proprietary ingredients, except in emergencies.

Even in these cases, only emergency responders and the chief of the ODNR’s oil and gas division, which is known to be cozy with industry, are entitled to the information. And they are barred from sharing it, even with environmental agencies and public health officials. Environmental groups argue this makes it impossible to adequately test for contamination or take other necessary steps to protect public health. “Ohio is playing a dangerous game of hide and seek with first responders and community safety,” says Teresa Mills of the Virginia-based Center for Health, Environment, and Justice.

Within two days of the spill, Halliburton disclosed the proprietary chemicals to firefighters and the oil and gas division chief, but it didn’t give this information to the EPA and its Ohio counterpart until five days after the accident, by which time the chemicals had likely reached or flowed past towns that draw drinking water from the Ohio River. The company says that it turned over the information as soon as it was requested. “We don’t know why USEPA and Ohio EPA didn’t have the information prior to July 3,” Halliburton spokeswoman Susie McMichael tells Mother Jones. “If they had asked us earlier, we would have provided the information, consistent with our standard practice.” The Ohio EPA, on the other hand, maintains that ODNR, emergency workers, and federal and state EPA officials had a representative ask Statoil and Halliburton for a complete list of chemicals just after the spill. Several days later, environmental regulators pressed for the information again and learned that it had already been shared with only ODNR, which according to the EPA report was not deeply involved in the emergency response.

Other key players, including local water authorities, the private company hired to monitor water contamination, and area residents, did not get a full rundown of chemicals, even after the EPA and the Ohio EPA finally received the information.

Ohio state officials maintain that the river water is safe to drink because the fracking chemicals have been so heavily diluted. But environmentalists are skeptical. “Tons of chemicals and brine entered the waterway and killed off thousands fish,” says Johnson of the Ohio Environmental Council. “There’s no way the drinking water utility or anyone else could monitor those chemical and determine whether the levels were safe without knowing what they were. Even today, I don’t think the public can be sure that the water is safe to drink.”