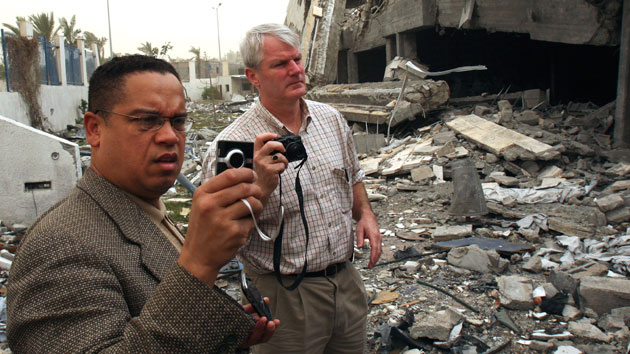 With the war in Gaza continuing without an end in sight, congressional leaders are rallying to condemn Hamas rocket attacks and support Israel. But members of the Congressional Progressive Caucus have been divided over the conflict, with some commending Israel’s military for its use of precision weapons and others outraged by the conflict’s mounting Palestinian civilian causalities.

The division was clear on July 29 when caucus co-chair Rep. Keith Ellison (D-Minn.), who has visited Gaza three times since 2009 and previously condemned the Israeli blockade of Gaza, published an op-ed in the Washington Post that highlighted recent Palestinian civilian casualties—including four children who were “blown up on a beach” by an Israeli attack. He noted that most Gaza residents “aren’t rocket shooters or combatants. For the past several years they have lived in dreadful isolation. The status quo for ordinary Gazans is a continuation of no jobs and no freedom.” Ellison again called for an end to Israel’s blockade and urged Hamas to give up its rockets: “There is no military solution to this conflict. The status quo brings only continued pain, suffering and war.”

Yet this is not the consensus view within the 65-member Progressive Caucus that Ellison co-leads. In recent weeks, other caucus members have focused on the rocket attacks launched against Israel and lent their support to its aggressive military reaction.

Toward the start of Israel’s air campaign in Gaza, Rep. Jerrold Nadler (D-N.Y.), a stalwart liberal representing Manhattan’s Upper West Side, issued a statement condemning Gaza’s rocket attacks and calling for the public to support Israel “to take whatever measure she deems necessary to defend the population against the attempted murder by these terrorists.” Nadler attended a rally in front of New York’s city hall with other prominent New York Democrats to express support for Israel’s actions in Gaza. Two days later, on July 16, caucus member Rep. Lois Frankel (D-Fla.) issued a statement with Rep. Ted Deutch (D-Fla.) calling for solidarity with Israel.

“Israel has gone far beyond what we have seen any other country do trying to protect the civilian population of its enemy,” Nadler said. Frankel and Deutch similarly praised the Israeli military for using “pinpoint technology to minimize any collateral damage.” So far more than 800 Palestinian civilians, including 232 children, have been killed by Israeli strikes in Gaza as of July 30.

Last week, Progressive Caucus member Jim McDermott (D-Wash.), a psychiatrist by training, condemned Israel’s attacks on hospitals. “The proximity of military targets or the suspicion of hidden weapons and militants is an invalid excuse in the targeting of a hospital or ambulance,” he said in a statement.

“You should not be put in danger in a medical situation by someone alleging that there’s some reason they should attack a hospital or doctor,” he tells Mother Jones.

On July 18, Ellison and five other representatives—all progressive caucus members—signed a letter to President Obama and Secretary of State Kerry calling for the White House and the State Department to “redouble your efforts” to press for a cease fire in Gaza. Contrast that to 2009, when 54 House Democrats signed a letter drafted by Ellison and McDermott urging the president “to work for tangible improvements to the humanitarian concerns” in Gaza.

As for Rep. Raul Grijalva (D-Ariz.), who co-chairs the caucus with Ellison, he has not said much publicly about the current war in Gaza. Although he signed the 2009 letter, he did not lend his name to the July 18 call for a cease fire. His office did not respond to requests for comment.