Before the penultimate issue of “Life With Archie” had even hit newsstands Wednesday, conservatives were preparing their outrage. As had been previously announced, Archie met his maker in Issue #36, heroically taking a bullet meant for his friend Kevin Keller. Keller, the series’ first gay character, has been a lighting rod for controversy since first being introduced in 2010, prompting Singapore to ban the series. After his boyfriend was murdered in a mass shooting targeting gay people, Keller was prompted to run for political office on a strictly pro-gun control platform. Archie’s death appears to be a heroic, selfless act at the end of the lighthearted redhead’s saga, but conservatives are in an outrage—because his killer was a homophobe. 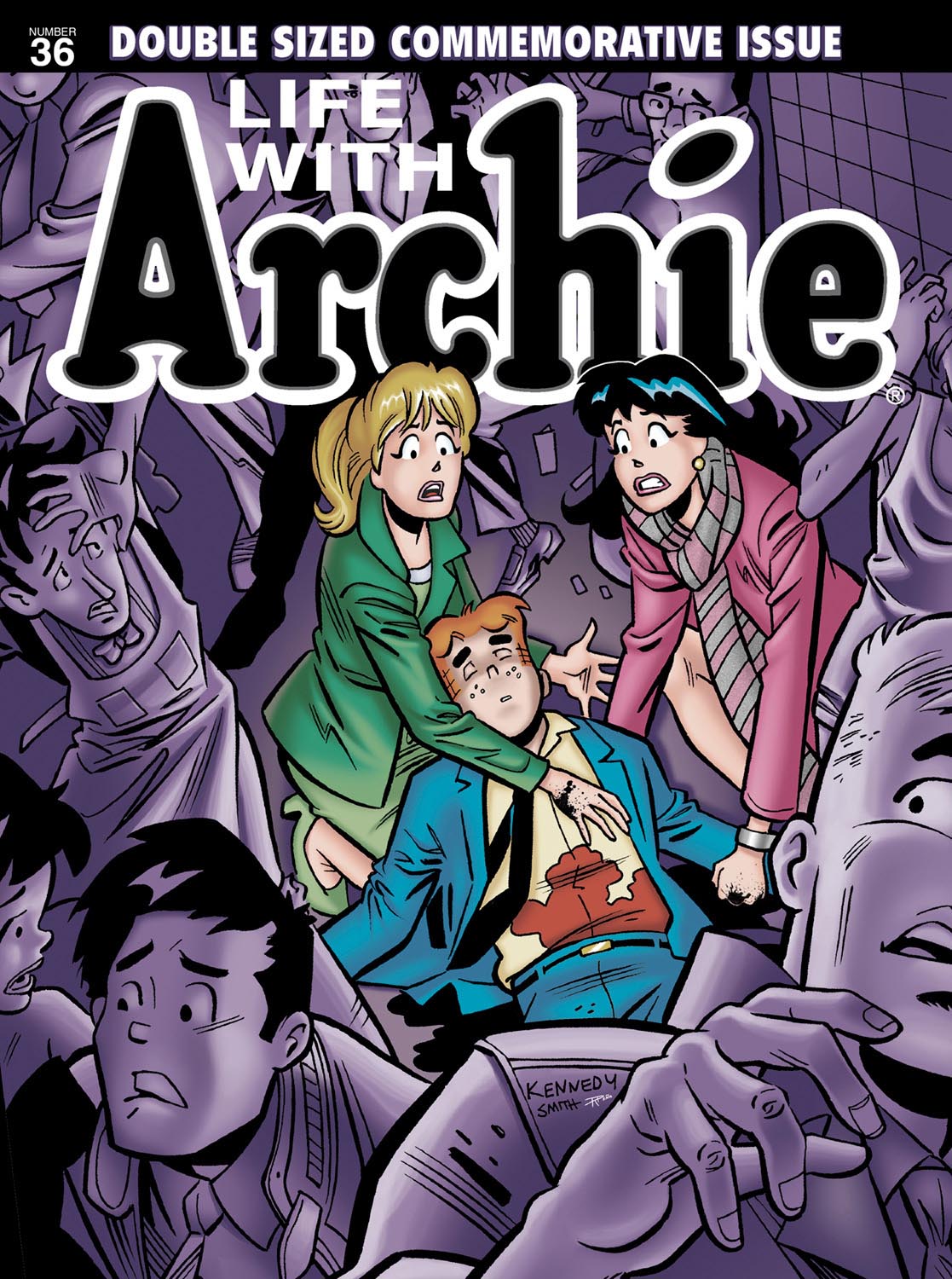 Christian Toto of Breitbart News’ Big Hollywood doesn’t want his kids exposed to the issues Archie presents: “There’s a sense in conservative circles that there are fewer and fewer places they can enjoy, stories their kids can read or movies they can see without being force-fed a message.”

Rod Dreher of the American Conservative responded to the news of Archie’s death by saying it “seems like everybody is gay in pop culture today,” and expressing concern that just “2 percent” of the population is engulfing the media.

Hot Air, a conservative news blog, had this to say about Archie’s last episode: “Sticking Archie Andrews in the middle of an assassination narrative is like redoing ‘Goofus and Gallant’ so that Goofus is a meth head. When you lose the innocence, you lose part of the charm.”

Before It’s News weighed in on the issue in an opinion piece: “The formerly healthy, all-American Archie Comics franchise has gone to extremes to corrupt children with a depraved liberal sexual/political agenda.”

The news swept Twitter and Facebook too, where conservatives even parodied Archie’s final chapter with a cartoon featuring even more liberal agendas that could have replaced the ending:

Homophobia killed Archie. I wish he had died defending the rights of artisanal cheesemakers vs the FDA: http://t.co/tg3AC8Bod6

Will the Republicans blame Obama for the death of Archie? stay tuned… 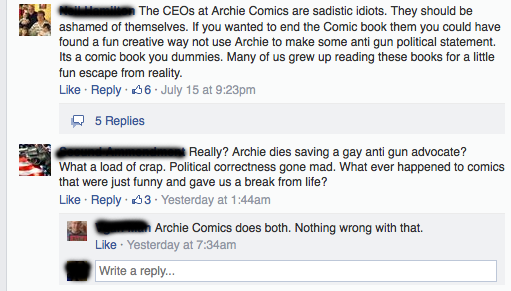 Though Archie Comics Publisher Jon Goldwater told the New York Daily News that the super-charged ending “had nothing to do with politics,” this is not the first time Archie’s political storylines have raised conservative ire. In Issue #10 of the Kevin Keller series, Keller confronts a woman upset about him kissing his boyfriend in public. “I don’t mind promoting my work and talking about issues,” writer and artist Dan Parent*, who created Keller, told Comic Book Resources. Though he claims he doesn’t want Archie to be a billboard for gay rights, he admits that “serious issues” sometimes come up in a quality storyline and that the kiss was an important part of a discussion about “tolerance and acceptance.”

The Archie death is not the only cartoon that’s been criticized for its progressive qualities. Conservatives are also freaking out about Marvel Comics’ decision to transform powerhouse hammer-wielder Thor into a woman, and the Council of Conservative Citizens nearly imploded when black actor Idris Elba was chosen to play a Norse God in Marvel Studios’ Thor. Marvel’s recent decision to make the next Captain America black is being described as “ridiculous” over Twitter, and Christian conservative groups threatened to boycott a gay Green Lantern in 2012.

The root of the Archie conservative ire appears to be the imposition of a political agenda. Maybe what they’re really worried about, though, is that their lily-white heterosexual fantasyland is officially too unrealistic, even for comic books.