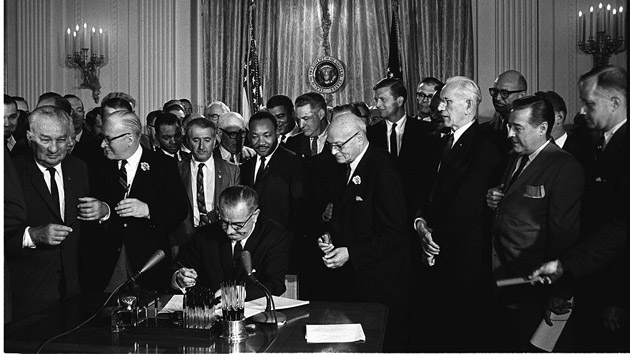 Here is President Obama’s statement on the 50th anniversary of the Civil Rights Act of 1964:

In 1964, President Johnson put pen to paper and signed the Civil Rights Act into law.  Fifty years later, few pieces of legislation have defined our national identity as distinctly, or as powerfully.  By outlawing discrimination based on race, color, religion, sex, or national origin, the Civil Rights Act effectively ended segregation in schools, workplaces, and public facilities.  It opened the door for the Voting Rights Act, and the Fair Housing Act.  And it transformed the concepts of justice, equality, and democracy for generations to come.

The Civil Rights Act brought us closer to making real the declaration at the heart of our founding – that we are all created equal.  But that journey continues.  A half a century later, we’re still working to tear down barriers and put opportunity within reach for every American, no matter who they are, what they look like, or where they come from.  So as we celebrate this anniversary and the undeniable progress we’ve made over the past 50 years, we also remember those who have fought tirelessly to perfect our union, and recommit ourselves to making America more just, more equal and more free.