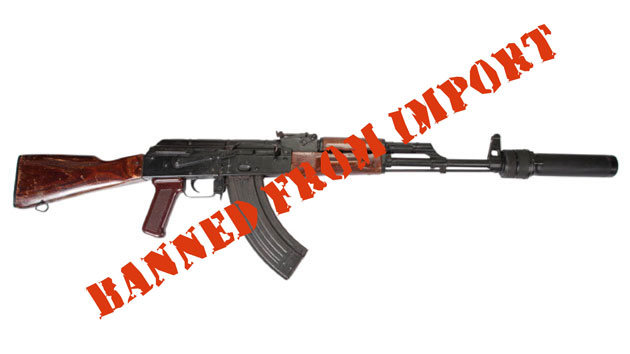 When the US imposed more sanctions on Russia this week, some US gun owners assumed the move was a targeted assault on their constitutional rights. It’s not. But according to Rostec, the Russian government-owned company whose Kalashnikov subsidiary makes the AK-47, the assault rifle will be much harder to come by for US customers. After Rostec was added to the sanctions list, it fired back. “For Kalashnikov…the US is an important market for selling arms,” a spokesman told ITAR-TASS, a Russian government news agency. “It should be noted that the Kalashnikov products are very popular in the US… This means that the sanctions the US Administration has imposed on Kalashnikov contravene the interests of US consumers.”

AK-47’s, which are cheap and durable (though not terribly accurate), are the world’s most popular gun. As many as 100 million have been produced since its debut in 1947—by Kalashnikov and a multitude of imitators in China and Eastern Europe. Kalashnikov’s fully-automatic models are illegal to own in the United States without a special permit. But the semi-automatic version are regulated under the same patchwork of state and local laws that regulate hunting rifles. In recent years, as the Russian military has reduced its orders, Kalashnikov has shifted its focus away from the full-auto weapons and toward semi-automatic models for the gun enthusiast market in the United States.

The new sanctions cut off the supply of AK-47s from the factory source, but gun stores with an old inventory and gun owners with one to spare are free to go about their business as before. The only caveat is that Kalashnikov can’t make any money off the deal.

In an unsigned statement posted on its website, Rostec notes that its analysts are conducting a “full study” of the impact of the new sanctions on its business, and argues that sanctions are putting its partnerships with US businesses at risk: “Now it is possible to say that the measures taken by Washington will have a negative impact on the cooperation of several Russian and American companies, threatening to undermine mutual trust,” the company maintains.

The AK issue came up during a State Department media briefing on Thursday. Asked if the Kalashnikov sanctions would affect customers in the US, spokeswoman Jen Psaki responded, “We take into account the impact on the United States, on US businesses and consumers, and certainly we feel that peace and political stability and respect for international law are of critical importance to the global economy and to US businesses.”

Kalashnikov’s exclusive US importer, RWC Group, has not yet issued a statement.