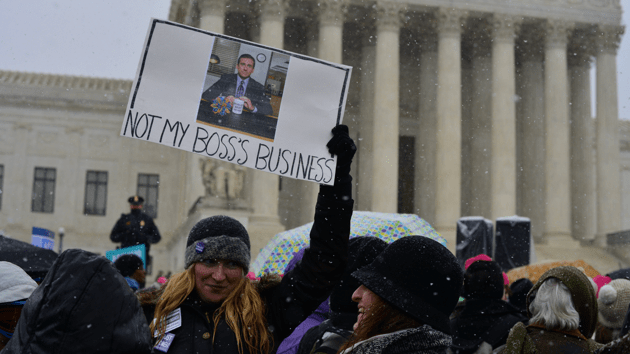 On Monday, the Supreme Court ruled that most private companies are not required to provide contraceptive coverage to their employees, as mandated by Obamacare. Four years after the high court ruled that corporations have free speech rights in its controversial Citizens United decision, the decision gives broad new privileges to corporations, granting them religious rights for the first time.

The decision in Sebelius v. Hobby Lobby Stores Inc., the most closely-watched case of the year, says that certain companies—those with more than half of their stock owned by fewer than five people—do not have to adhere to the Obamacare mandate that employee insurance plans cover birth control, if the owners have a religious objection. This 5-4 ruling applies to about 90 percent of all American businesses, and 52 percent of America’s workforce.

The majority decision, written by Justice Samuel Alito, held that if Hobby Lobby’s owners believe that the contraceptives at issue cause abortions, the mandate is a burden on their religious beliefs: “[W]e must decide whether the challenged…regulations substantially burden the exercise of religion, and we hold that they do,” Alito wrote. “The owners of the businesses have religious objections to abortion, and according to their religious beliefs the four contraceptive methods at issue are abortifacients.”

Alito and the four other conservative justices on the court were essentially overruling not just an Obamacare regulation, but science. According to the Food and Drug Administration, all four of the contraceptive methods Hobby Lobby objects to—Plan B, Ella, and two intrauterine devices—do not prevent the implantation of a fertilized egg into the uterus, which the owners of Hobby Lobby consider abortion. Instead, these methods prevent fertilization.

Yet this scientific determination did not guide the five justices. In his opinion, Alito contends that these four contraception methods “may have the effect of preventing an already fertilized egg from developing any further by inhibiting its attachment to the uterus.” He does not cite any science to back this up. Instead, in a footnote, Alito concedes that Hobby Lobby’s religious-based assertions are contradicted by science-based federal regulations: “The owners of the companies involved in these cases and others who believe that life begins at conception regard these four methods as causing abortions, but federal regulations, which define pregnancy as beginning at implantation, do not so classify them.” Still, he and the other conservative justices are saying that in a conflict between a religious view and scientific research, religion wins.

The exemption from Obamacare’s contraception mandate does not apply to other types of medical procedures that might draw religious objections, including blood transfusions or vaccinations. The majority ruled that the government can pay for contraception for women whose employers object, noting that the government already does so in cases involving religious institutions and religiously-affiliated nonprofits.

Here’s more background on the case:

What did Hobby Lobby argue is unconstitutional about Obamacare? Hobby Lobby, a private, for-profit chain of arts and crafts stores, is owned by the billionaire Green family, who are evangelical Christians. The Greens say they have a moral objection to 4 of the 20 FDA-approved birth control methods covered by Obamacare. They believe these contraceptives cause abortions (even though they don’t), and they requested the government grant Hobby Lobby a religious exemption to Obamacare’s requirement that company insurance plans fully cover contraception.

(The ruling in the Hobby Lobby case was issued jointly with a similar case called Conestoga Wood Specialties Corp. v. Sebelius, which was brought by a private cabinet-making company that wants to be exempt from covering Plan B and Ella, but not IUDs. Dozens of companies claim religious objections to covering birth control.)

What exactly did the Supreme Court have to decide? Under a 1993 law called the Religious Freedom Restoration Act (RFRA), Americans are not required to follow federal laws that “substantially burden religious exercise,” unless the government has a “compelling…interest” at stake that outweighs that individual burden.

In 2012, Hobby Lobby sued Kathleen Sebelius, then the head of the Department of Health and Human Services (HHS), arguing that Obamacare’s contraception mandate placed a substantial burden on the firm because if the company chooses not to cover the birth control methods it finds objectionable, then it would have to pay a penalty of $100 per per day for each of its 13,000 employees.

The Supreme Court had to decide whether the RFRA applies not only to people but to private commercial enterprises, a determination no court has ever made. And if Hobby Lobby was significantly burdened by the contraception mandate.

This corporate personhood thing sounds familiar. Does this case have anything to do with Citizens United? In 2010, the Supreme Court ruled in Citizens United v. Federal Election Commission that corporate political spending is speech protected by the First Amendment. This decision opened the door to the legal argument that corporations may also have religious rights under the Constitution. The court’s Monday ruling in Hobby Lobby takes corporate personhood to a whole new level.

How does this affect me? A pro-Hobby Lobby ruling could have endangered not only Obamacare, but labor rights, gay rights, and women’s rights. Here’s what actually happened:

1. Access to contraception: Women’s health advocates worried that a pro-Hobby Lobby ruling would have jeopardized access to affordable birth control for millions of women who work at private companies with religious owners, forcing those women purchase certain contraception on their own. But since the court noted that the government can provide a workaround, there may end up being no gap in birth control coverage.

2. Access to other health benefits under Obamacare: The ruling could have endangered other provisions of the health care law. A company run by Jehovah’s Witnesses could have objected to covering blood transfusions. A business helmed by devout Christian Scientists might not want to cover vaccinations. “Scientology-believing employers could insist on noncoverage of its nemesis, psychiatry,” the Reverend Barry Lynn, the executive director of Americans United for Separation of Church and State, told Forbes. And so on. But Alito made clear that the exemption granted in Monday’s decision applies only to contraception.

3. Workers’ rights: Observers worried that if the religion of a private company’s owner could dictate the health plans offered, other companies would have been free to argue they have the right to cite religious views of the owners and fire an employee for being single and pregnant or for having an abortion. Corporations with fundamentalist owners of any religion might object to paying women as much as men. Fundamentalist Muslim-owned companies could force female employees to wear burkas. Private companies might be able to legally deny employment to LGBT people. But the Supreme Court made clear that employers should not be able to use this decision to discriminate under the guise of religion.