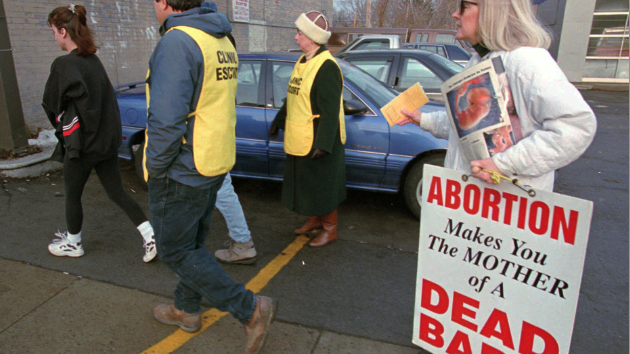 On Thursday, the Supreme Court unanimously ruled that a Massachusetts law creating a 35-foot buffer zone around abortion clinics in which protest was forbidden is a violation of the First Amendment. Chief Justice John Roberts wrote the opinion, which held that the law was unconstitutional because it blocked peaceful protest on public streets.

The ruling will make it difficult for states to justify laws that establish buffer zones for abortion clinics. In cases where anti-abortion protesters obstruct access to clinics, the court says, states must pursue alternatives, such as court orders to limit protest. A problem with access to a clinic, for example, “could be addressed through a law requiring crowds blocking a clinic entrance to disperse for a limited period when ordered to do so by the police.” Only if those narrower measures fail and a state compiles a long record of problems caused by clinic protests, can the state generally bar clinic protest.

Four states, Massachusetts, Montana, New Hampshire, and Colorado, have buffer zone laws on the books. The case, McCullen v. Coakley, was brought by a grandmotherly anti-abortion “sidewalk counselor” named Eleanor McCullen, who argued that the zone violated her First Amendment right to peacefully protest. Massachusetts countered that the law protected a competing right protected by the constitution: the right to obtain an abortion—which prior to the establishment of buffer zones, clinic protesters had endangered through threats, harassment, and physical hindrance.

The court agreed that buffer zones impeded the rights of McCullen and others who wish to “engage in personal, caring, consensual conver­sations with women about various alternatives.”

The fate of a 2000 Supreme Court ruling that permitted states to enact small “floating buffer zones” around people who are entering or leaving abortion clinics is not clear. The Court did not address that case, Hill v. Colorado, in this opinion. But the validity of floating buffer zones now seems in question, according to SCOTUSblog‘s Tom Goldstein. Floating buffer zones have been difficult to enforce, and abortion rights advocates have argued that they provide scant protection from violent protesters.

Here’s more background on the case:
In order for Massachusetts’s buffer zone law to survive a First Amendment challenge, lawyers for the state had to prove that the legislature had a compelling reason to limit speech, that the law wasn’t aimed at suppressing ideas, and that the law didn’t restrain speech more than necessary.

The Supreme Court agreed with Massachusetts that the state had a compelling interest and that the law didn’t target specific ideas. However, Roberts wrote, “The buffer zones burden substantially more speech than necessary to achieve the Commonwealth’s asserted interests.”

The Supreme Court’s decision partially hinged on how serious of a threat protesters posed to abortions rights.

In its argument to the court, Massachusetts noted that it has a history of violent protests at clinics. The state created buffer zones in 2000 in reaction to the 1996 murders of two abortion clinic workers. But the law was also a response to routine protests outside clinics in Boston, Worcester, and Springfield, where activists threatened women and physically barred them from entering the clinic. Here is a vivid, but typical example from a clinic worker who testified before the Massachusetts Legislature in 1999 about witnessing a particular protest:

A woman in her mid-20s and her elderly grandfather…were trapped inside the cab for several minutes…Two escorts were able to make their way to the woman’s side as she ran crying into the clinic. Her grandfather, who walked with a cane, was unable to run…In the amount of time it took him to walk from the cab to the clinic entrance, he was shoved and almost fell down twice. He was also forced to endure various insults about his race and remarks about how his handicap was a punishment from God.

Other clinic staff testified that protesters blocked them from going to work, pressed a clinic escort up against a car, and pushed a clinic worker into a moving car.

The Supreme Court issued its guidelines for buffer zones in Hill v. Colorado in 2000, the same year Massachusetts passed its law. Following the court’s lead, Massachusetts created six-foot “floating buffer zones” around any person within 18 feet of an abortion clinic’s entrance or exit. Protesters were still allowed to stand next to a clinic’s doors, and they could approach within six feet of a person with that person’s consent.

The floating buffer zone law proved impossible to enforce. It was unclear to police what constituted an approach, and some protesters interpreted eye contact as consent to approach women and scream in their faces. In 2007, Captain William Evans of the Boston Police Department testified to the Legislature that his officers had probably arrested no more than five protesters in seven years (most for violating laws other than the buffer zone) despite the fact that protesters probably violated the law almost every week?end.

So that year, Massachusetts abandoned the floating buffer zones sanctioned by the Supreme Court, and established a more ambitious, hard buffer zone of 35 feet surrounding an abortion clinic’s entrance, exit, or driveway.

In oral arguments before the court in January, Mark Rienzi, the attorney for McCullen, dismissed incidents of violence and aggression at abortion clinics as the work of a few bad actors. He focused on McCullen, who plasters her refrigerator with baby photos she says she has received from women she talked out of having abortions.

This tactic worked. Roberts noted, “The record indicates that the problems are limited principally to the Boston clinic on Saturday mornings, and the police there appear perfectly capable of singling out lawbreakers. [The] petition­ers are not protestors; they seek not merely to express their opposition to abortion,” but to counsel women. “It is thus no answer to say that petitioners can still be seen and heard by women within the buffer zones. If all that the women can see and hear are vocifer­ous opponents of abortion, then the buffer zones have effectively sti­fled petitioners’ message.”