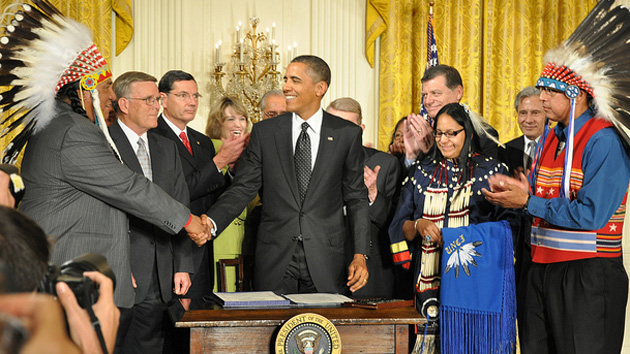 This Friday, President Obama will step on American Indian land for his first time as president. He’ll be visiting the Standing Rock Sioux Reservation, which straddles one million acres of the Dakota plains, to meet with leaders and discuss issues facing American Indians. The last sitting president to visit reservation land was Bill Clinton in 1999, so this week’s visit is a big deal.

In a June 5 op-ed in Indian Country Today, the president promised to do more for American Indians. But he also argued that his administration has already delivered great progress. Is that the case?

When Obama visits Standing Rock, he will find a community where 86 percent of residents are unemployed. That’s only the sixth–worst unemployment rate among Indian reservations: the worst is 93 percent, at the Sokaogo Chippewa Community in Wisconsin.

On top of unemployment, the American Indian community faces a number of other challenges: sky-high rates of adolescent suicide, rape, obesity, alcoholism, drug use, physical abuse and even post–traumatic stress disorder.

On the eve of this presidential visit, here’s a rundown of what the Obama Administration has done to tackle some of the problems faced by the American Indian community:

But these administration efforts don’t seem to have made much of a dent:

As he gears up for his historic visit, Obama is sure to be aware of the extent of Indian Country’s challenges. If he wants to solve them, this first trip shouldn’t be his last.