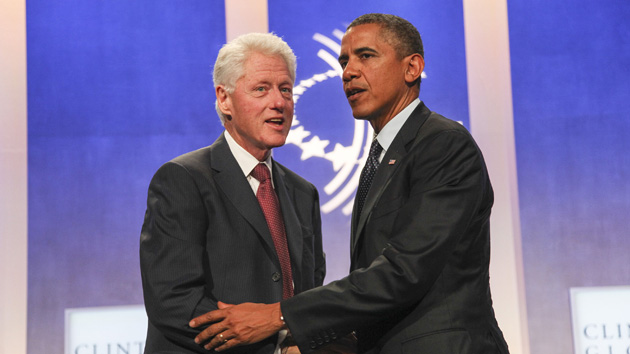 Ken Vogel knows what it is like to get tossed out of a good party. Among us campaign finance reporters, Vogel is known as a fearless crasher of political fundraisers and invite-only donor schmoozefests, from which he is usually—but thankfully not always—ejected. As the chief investigative reporter for Politico, the hyper-competitive town organ for Washington, DC, Vogel has for years chronicled the rapidly increasing flow of money into American politics and the eccentric, grouchy, madcap millionaires and billionaires who, in Vogel’s telling, “are—in a very real and entirely legal way—hijacking American democracy.”

Vogel’s new book, Big Money: 2.5 Billion Dollars, One Suspicious Vehicle, and a Pimp—On The Trail of the Ultra-Rich Hijacking American Politics, propels us through the ever-changing world of what he calls “big-money politics.” Here are four juicy tidbits from Big Money.

Vogel reports on a January 2013 private speech by Clinton to a group of Obama fundraisers on behalf of Organizing for Action (OFA), the rebooted version of Obama’s 2012 campaign. Launched at the start of the president’s second term, Obama officials said OFA would focus strictly on issues—gun control, immigration, raising the minimum wage. But that’s not how Clinton saw it:

“This is a huge deal, this midterm election,” said Clinton. “And I think even more important, this question is whether we can use the techniques that actually gave people the chance to debate health care, debate economic policy, understand what happened in the Recovery Act, all these things that were an issue last time, understand why the welfare reform act was wrong, and the Medicare Act was wrong. Can we use that to actually enact an agenda in the Congress and then go into the midterm and protect the people who voted for it?”

On the eve of the 2012 Republican Party convention in Tampa, Vogel got inside a reception for major Romney donors and fundraisers (also known as bundlers). At one point in the shindig, Josh Romney, one of Mitt’s sons, appeared to go a little overboard when thanking his dad’s money-men:

“My dad will be the next president of the United States of America and you are all invited to the inauguration,” [Romney] proclaimed to rousing cheers before backtracking sheepishly, as if wondering whether the complicated campaign and ethics rules forbade inviting big donors to the inauguration. “I don’t think I’m really allowed to do that,” he said, looking offstage to his right, perhaps for guidance from a campaign official familiar with the rules, before letting his exuberance and sense of kinship with the campaign’s rich supporters takes over. “But it’s a big place, so you all can come.”

Top aides secretly hatched a plan to boost Romney’s 2008 campaign by forming a so-called 527 committee, a big-spending precursor to super PACs. They called it Turnaround America and enlisted a well-connected fundraiser named Phil Musser to run the group. But the plan didn’t get far:

Musser laid it all out in a PowerPoint presentation, and he spent a few months crisscrossing the country on his own dime, delivering it to Romney’s richest backers. Several liked the plan and made tentative commitments. But most got cold feet after they checked with their lawyers, who explained that it could expose them to legal risk. The plan was too far ahead of its time, and Musser scrapped it before he ever filed the paperwork, leaving no trace that more than two years before the Citizens United decision Romney’s allies had foreseen the power of what would become super PACs.

Obama made waves during an August 2012 Reddit “Ask Me Anything” forum by voicing support for a constitutional amendment to roll back the effects of the Supreme Court’s Citizens United decision. It turns out that such a radical move, favored by many activists on the left, had been on the president’s mind for quite a while.

Vogel quotes the president stumping for an amendment during a February 2012 Q-and-A at a private Seattle fundraiser:

“Now, I taught constitutional law,” Obama continued to [Bill] Gates et alia. “I don’t tinker with the Constitution lightly. But I think this is important enough that citizens have to get mobilized around this issue, and this will probably be a multiyear effort. After my reelection, my sense is that I may be in a very strong position to do it.”

Obama added that a reelection victory “may allow me to use the bully pulpit to argue forcefully for a constitutional amendment.” So far, the president has done no such thing.