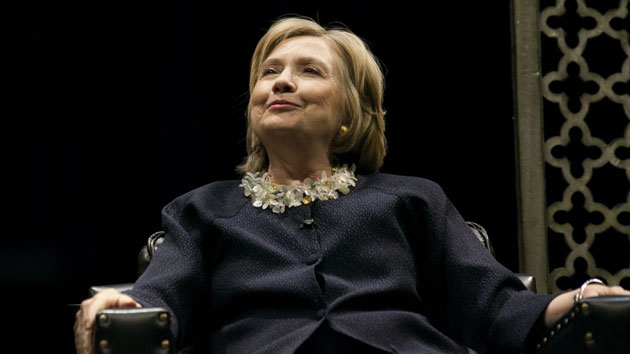 A few weeks ago, Hillary Clinton delivered a much-touted policy speech at the New America Foundation in Washington, where she talked passionately about the financial plight of Americans who “are still barely getting by, barely holding on, not seeing the rewards that they believe their hard work should have merited.” She bemoaned the fact that the slice of the nation’s wealth collected by the top 1 percent—or 0.01 percent—has “risen sharply over the last generation,” and she denounced this “throwback to the Gilded Age of the robber barons.” Her speech, in which she cited the various projects of the Bill, Hillary, and Chelsea Clinton Foundation that address economic inequality, was widely compared to the rhetoric of Sen. Elizabeth Warren (D-Mass.), the unofficial torchbearer of the populist wing of the Democratic Party. Here was Hillary, test-driving a theme for a possible 2016 presidential campaign, sticking up for the little guy and trash-talking the economic elites. She decried the “shadow banking system that operated without accountability” and caused the financial crisis that wiped out millions of jobs and the nest eggs, retirement funds, and college savings of families across the land. Yet at the end of this week, when all three Clintons hold a daylong confab with donors to their foundation, the site for this gathering will be the Manhattan headquarters of Goldman Sachs.

Goldman was a key participant in that “shadow banking system” that precipitated the housing market collapse and the consequent financial debacle that slammed America’s middle class. (A system that was unleashed in part due to deregulation supported by the Clinton administration in the 1990s.) This investment house might even be considered one of the robber barons of Wall Street. In its 2011 report, the Financial Crisis Inquiry Commission, a congressionally created panel set up to investigate the economic meltdown, approvingly cited a financial expert who concluded that Goldman practices had “multiplied the effects of the collapse in [the] subprime” mortgage market that set off the wider financial implosion that nearly threw the nation into a depression.

Hillary Clinton’s shift from declaimer of Big Finance shenanigans to collaborator with Goldman—the firm has donated between $250,000 and $500,000 to the Clinton Foundation—prompts an obvious question: Can the former secretary of state cultivate populist cred while hobnobbing with Goldman and pocketing money from it and other Wall Street firms? Last year, she gave two paid speeches to Goldman Sachs audiences. (Her customary fee is $200,000 a speech.)

In recent years, Goldman Sachs has hardly exemplified the values and principles Clinton earnestly hailed in her speech. A few reminders:

Given Hillary Clinton’s Warrenesque address at the New America Foundation, I asked a spokesmen for the potential 2016 candidate if there was anything incongruous about her association with Goldman, and he forwarded this statement:

The support the Clinton Foundation receives from companies such as Goldman Sachs, organizations and individual donors helps maximize the impact of our philanthropic work. This support is helping enterprise partnerships in South America that are creating jobs; efforts to improve access to early childhood education in the U.S.; development programs that help small holder farmers in Africa; and rebuilding and economic development efforts in Haiti.

Goldman Sachs has been a long time supporter of the Clinton Global Initiative where they have advanced a commitment designed to support 10,000 women across the world through business training and education. We are grateful for their support.

Clinton’s relationship with Goldman Sachs is not unique. Bill and Hillary Clinton have always nurtured cozy ties with Wall Street—in terms of policies and funds-chasing (for their campaigns and the foundation). The chief economic guru of the Clinton administration was Robert Rubin, a former Goldman Sachs chairman, and the financial deregulation and free-trade pacts of the Clinton years have long ticked off their party’s populists. In his new book, former Treasury Secretary Timothy Geithner recalls visiting Bill Clinton at his Harlem office and asking his advice, as Geithner puts it, on “how to navigate the populist waters” and respond to the American public’s anger about bailouts and Wall Street. The former president didn’t seem to have much sympathy for these popular sentiments and replied by referring to the CEO of Goldman: “You could take Lloyd Blankfein into a dark alley and slit his throat, and it would satisfy them for about two days. Then the bloodlust would rise again.”

If Hillary does decide to seek a return to the White House, can she straddle the line? Assail the excesses of Wall Street piracy and tout the necessity of economic fair play yet still accept the embrace, generosity, and meeting rooms of Goldman Sachs and other Wall Street players? During her speech, she offered a good summation of populism, remarking “working with my husband and daughter at our foundation, our motto is ‘We’re all in this together,’ which we totally believe.” Yet her association with Goldman might cause some to wonder how firmly she holds this belief—and how serious she is about reining in those robber barons.