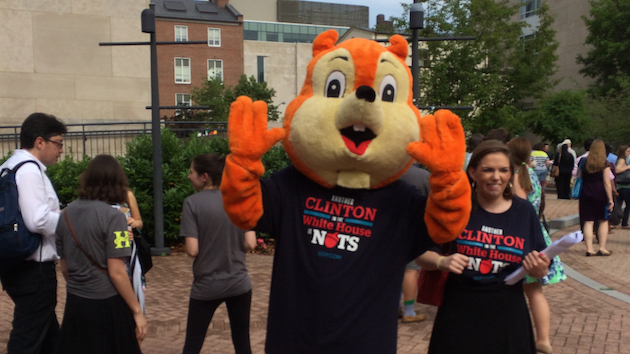 Former Secretary of State Hillary Clinton is speaking in DC Friday night on the campus of George Washington University. The visit was to promote her new book, Hard Choices, but had the air of a campaign event: The line to get in snaked around the block, with attendees sporting “Ready for Hillary” stickers on their shirts. Network TV cameras lined the back of the lower mezzanine. Secret Service agents trolled through the aisles.

And the Republican National Committee was there to respond. Rival political factions turning up at events isn’t a rare occurrence, but the RNC unveiled a new strategy with an…interesting bent. It was the debut of the HRC Squirrel: A person walking around in a bright orange squirrel suit. Tailed by four RNC staffers, the squirrel wandered around giving high-fives to the folks in line, who generally seemed to get a kick out of the odd scene. The squirrel has a Twitter handle and a donation page where anti-Clintonites can get bumper stickers that say “Another Clinton in the White House is Nuts.”

That nutty joke was the gist of the attack, making it a little unclear that the furry was there to rebuke the attendees’ favorite Democrat. 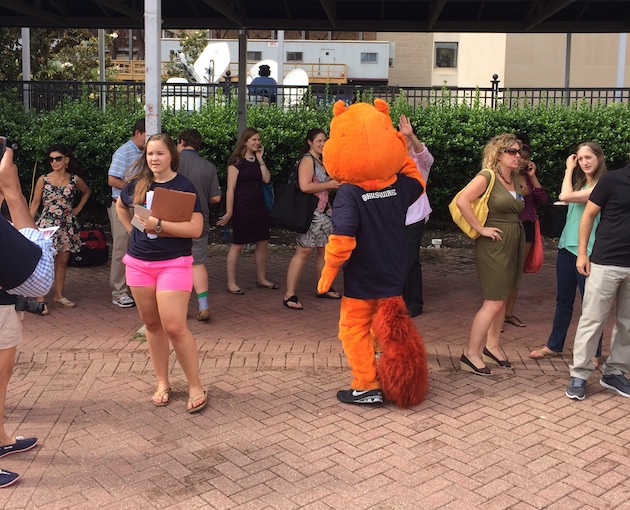 The plainclothes staffers followed the squirrel around, handing out an information sheet with bullet points attacking Clinton. Bold statements include “Benghazi is Still the Defining Moment of Clinton’s Tenure,” and “Clinton’s Russia Reset Has Failed.” One of the staffers, an RNC deputy press secretary, said that the squirrel would be making appearances at subsequent Clinton book signings.