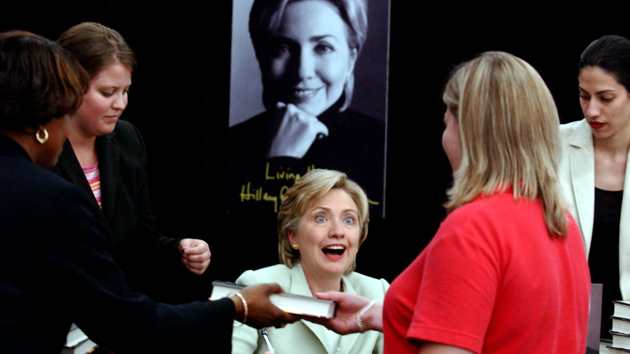 Hillary Clinton at a Wal-Mart book signing in Northern Virginia in 2003.Linda Spillers/AP

How times change. This Saturday Hillary Clinton is scheduled to swing by a Costco in the Northern Virginia suburbs of Washington, DC, for a book signing—part of her tour touting her new release, Hard Choices. The choice of venue isn’t all that surprising: the discount retail outlet has become a favorite among liberals thanks to its reasonable wages and generous health benefits. President Barack Obama and Vice President Joe Biden love to get photographed yucking it up at Costco stores, while the company’s co-founder and former CEO spoke at the Democrats’ 2012 convention.

For Clinton, this is a near repeat of her last book tour, almost exactly 11 years ago today. That tour also took her through the DC suburbs. But back then, she appeared at Costco’s rival, a company that has become, for Democratic activists, the emblem of income inequality: Walmart. In 2003, more than 1,000 Hill-fans showed up at the Fairfax, Virginia, store to have their copy of Clinton’s memoir Living History signed. “After many hours of waiting, they finally reached the senator, sitting at a black-curtain display facing a rack of $9.88 women’s shoes and $7.84 denim baby outfits,” according to an Associated Press article from the time. Clinton spent three hours interacting with her adoring crowd, at one point needing a hand massage from an aide after she got post-autograph finger cramps.

Clinton’s Walmart allegiance would soon sour. In 2005 she returned a $5,000 donation from the company’s PAC, severing most of her political ties to the company and putting an end to a long, cozy relationship that dated back to her days in Arkansas. Walmart is the country’s largest private employer with 1.3 million US employees, a wildly profitable company that has led the way in destabilizing unions as a force in the American economy. It is now common course for Democrats with national ambitions to rail against the company’s low wages and efforts to quash workers’ attempts to organize. Clinton’s past association with Walmart shows the dangers of a political career that spans more than three decades. When political tides shift over the years, they can leave stains on one’s resume.

Hillary was the primary breadwinner for the Clinton clan when Bill was governor of Arkansas in the 1980s. With Bill earning $35,000 a year as governor, the family relied on Hillary’s salary from her job as a partner at Rose Law Firm, which she supplemented by serving as a board member for several companies. One of those companies was Walmart, and it was an association that proved particularly lucrative for the Clintons. She sat on the board from 1986-1992 and earned $18,000 a year, with a $1,500 bonus for each quarterly board meeting she attended. Clinton held nearly $100,000 in Walmart stock before she and her husband moved to DC.

Clinton was the first woman to serve on the board of the company. As the Village Voice noted in a 2000 article denouncing Clinton Walmart past, Clinton’s spot on the board was designed just for her: she wasn’t filling any open vacancies, and the company didn’t replace her seat when she resigned in 1992. Her ties to Walmart weren’t confined to her role on the board, either. Walmart was one of Rose’s clients and, according to a 1994 New York Times article, Hillary served as “director” for the firm’s representation of Walmart.

In 2007 the New York Times reported that during her time on the board, Clinton pushed for greater representation for women in the company’s management and led an advisory group that focused on ways Walmart could improve its environmental practices. During a shareholder meeting the year after she joined the company, Walton said they’d added a “strong-willed young lady on the board now who has already told the board it should do more to ensure the advancement of women.”

But on unionization—the primary liberal complaint against Walmart—Clinton had little to say. A 2008 ABC review of videotapes from Walmart meetings found that “Clinton remained silent as the world’s largest retailer waged a major campaign against labor unions seeking to represent store workers.”

“She was not a dissenter,” one of her fellow board members told the Los Angles Times in 2007. “She was a part of those decisions.”

As governor, Bill was a defender of Walmart, a homegrown Arkansas company. The couple enjoyed free airfare on the Walmart corporate jet 14 times in 1990 and 1991. In January 1992, Bill brokered a deal that allowed a New Hampshire-based manufacturer to sell its wares at Walmart stores, a move his primary opponents alleged was a scheme to use corporate ties in order to buy votes with jobs. By the end of the primary Hillary had stepped down, lest she become a liability. “I have concluded that my full-time participation in my husband’s presidential campaign prevents me from fulfilling my responsibilities as a director of these public companies,” Hillary said in a statement when she resigned from the boards of Walmart, TCBY, and Lafarge Corp. that May.

Hillary gives scant mention to her time on Walmart’s board in her 2003 memoir Living History, confining it to one paragraph about leaving aside her career for Bill’s campaign. “That meant leaving the board of Walmart,” she wrote, “on which I had sat for six years at the invitation of Sam Walton, who taught me a great deal about corporate integrity and success.”

Though Clinton had begun to distance herself from her Walmart past by the mid-2000s, her Democratic opponents during the 2008 campaign hadn’t forgotten. “While I was working on those streets watching those folks see their jobs shift overseas,” Obama said in one debate, “you were a corporate lawyer sitting on the board at Walmart.”

Clinton’s public comments may have turned against the Arkansas company, but the ties haven’t been completely severed. Bill Clinton has met with Walmart’s past CEO Lee Scott to guide him on boosting the company’s bona fides among environmentalists. And the Walmart Foundation has been a major funder of the Clinton Foundation, donating between $1 and $5 million to the Clinton organization through 2013. The Walmart Foundation has funded a host of “energy and climate change” awards for the Clinton Global Initiative. One could argue that the Clinton Foundation shouldn’t be faulted for taking money from a nonprofit for humanitarian causes. But the ties have extended beyond that. This past April, a glowing blog post on the Clinton Foundation’s website touted Walmart—the company, not their foundation—for “efforts to empower girls and women” in a Q&A with the senior director of Federal Government Relations at Wal-Mart Stores, Inc.

Even if Clinton no longer wants to associate herself politically with the Walmart clan, the Waltons don’t share that sentiment. Walmart scion Alice Walton—the 15th richest person in the world, worth $35 billion—donated the max $25,000 to Ready for Hillary in November.