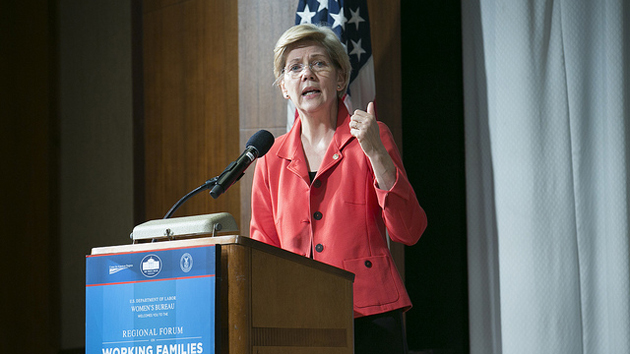 Sen. Elizabeth Warren (D-Mass.) isn’t ready to give up on her effort to reform student loan interest rates. On Wednesday, her bill failed to gain the 60-votes needed to clear a Republican filibuster, despite garnering 56 yea votes. But that is just the opening salvo in a planned Democratic effort to blast Republicans for opposing the effort to lower student loan repayments.

On Thursday, Sen. Mitch McConnell’s Democratic opponent Alison Lundergan Grimes announced that Warren would visit Kentucky later this month. While Warren is there primarily to boost Grimes—who is in a close race to unseat the Senate’s minority leader—the trip is also an opportunity for the Massachusetts senator to trumpet her bill, which would allow past student loan borrowers to refinance their debt to the current interest rate of 3.86 percent. Warren’s swing through Kentucky will include “meeting with local college students and recent graduates to discuss their experiences and concerns,” according to a press release from Grimes’s campaign.

Warren’s office didn’t respond to a request for comment about whether she has further plans to stump for her bill by campaigning for other Senate candidates.

Democrats are clearly banking on Warren’s bill as a wedge issue for the 2014 midterm elections, when they’ll be struggling to hold onto their Senate majority against an unfavorable map (the party has to defend a host of seats in traditionally red states that they won along the first Obama wave in 2008). “I think it is time to come back louder than ever,” Warren said in an e-mail to supporters Wednesday night. “I think it is time to show up at campaign events and town halls and ask every single Republican who voted against this bill why protecting billionaires is more important than giving our kids a chance to pay off their loans. I think we need to ask, and ask again, and ask again.”

After Warren’s bill failed Wednesday, the Democratic Senatorial Campaign Committee blasted out to reporters 10 separate e-mails questioning whether the Republican candidate in each contested election would “Continue Standing With Special Interests & Against [insert relevant state’s] College Students?” As the National Journal‘s Elahe Izadi reported last week, Democrats view Warren’s bill as the latest measure in their efforts to tar Republicans on women’s issues. By Democratic logic, Republicans are hurting women by refusing to endorse lower interest rates, because women attend college at higher rates than men.

Those arguments aren’t likely to persuade Republicans. Even if Democrats could convince the GOP to support lowering interest rates in concept, Warren’s bill is a nonstarter for Republicans. It offsets the cost of aiding students by increasing taxes on millionaires, violating the basic anti-tax dogma that motivates the current conservative movement.