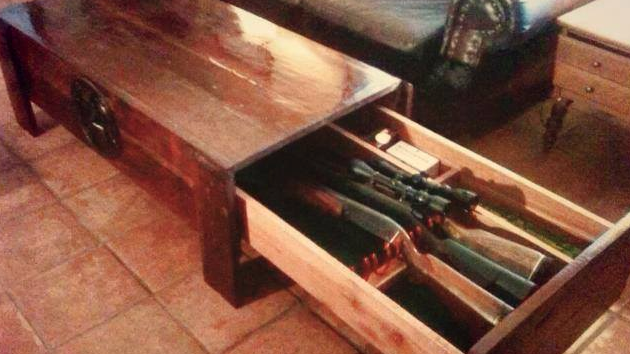 A month before a married couple allegedly gunned down two police officers and a bystander in Las Vegas, suspect Jerad Miller went on Facebook looking for a gun. Any gun would do, Miller wrote, as long as it worked on the “evil tyrant bastards.”

Facebook users soon chimed in to help Miller with his request. One person replied, “ak47.” A second asked, “What happened to urs?” A third offered, “What are you looking for.”

Miller replied, “Doesn’t matter, bolt action, semi, anything that can reach out and touch evil tyrant bastards. Idc [I don’t care] if its a hundred dollar pink 22 rifle lol.”

A fourth person chimed in that the “Gun store has plenty of rifles.” Miller replied, “We broke bro, believe me if we had the money we would be at some of the best gun stores in the country buying what we need. Idc if its a ww2 m4 lol. something for when they call us terrorists, we can defend ourselves.”

A fifth person recognized that the conversation was entering potentially illegal territory, and recommended that Miller hide his identity. “You and I both know that you shouldn’t be using Facebook for this. Get yourself a tor router and be anonymous like the constitution always intended,” the person wrote. Miller replied, “lol im just fucking around.”

But according to authorities, Miller wasn’t “just fucking around”—five people, including Miller and his wife, Amanda, are now dead. While we don’t know if the Millers were successful in obtaining any guns through Facebook, the fact that the post is still up raises questions about how well Facebook’s effort to crack down on illegal gun sales is working. In March, the social network announced that it would start deleting posts that offer to buy or sell guns without background checks. At the time, it wasn’t clear how Facebook planned to enforce the new guidelines. (As of 2012, Miller and his wife were not allowed to own guns because of his criminal record, according to Miller’s post on the conspiracy-peddling website, Infowars.)

“We are sickened to learn that the Las Vegas shooter attempted to obtain a rifle through Facebook. The post has remained live on Facebook for a month, demonstrating the inadequacy of Facebook’s gun policy,” said Dan Gross, president of the Brady Campaign to Prevent Gun Violence, in a statement. “Facebook continues to make it too easy for dangerous people to find guns and should prohibit gun sales outright.”

In a statement sent to Buzzfeed, a Facebook spokesperson said: “While this online discussion is certainly disturbing in light of recent events, we have not been made aware of any connection to an actual gun transaction offline.”