On December 10, 2013, a police car, lights flashing, clattered down a dirt road on a watermelon farm in California’s San Jacinto Valley. A pair of cargo trucks trailed behind.

They had come for the stolen bees.

In the vehicles rode David Allred, the proprietor of two local honey farms; Allred’s insurance adjuster; and at least two members of the Riverside County sheriff’s department, including Sgt. Steven Grassel. Grassel sliced the lock off of a security fence that ringed a small building, and the crew set about loading huge pallets of beehives onto the trucks. After they finished, the recovery team drove off with 150 hives of honeybees worth about $30,000.

Now Gary Manning and Jeffrey Olney, who say they own the bees that were snatched in the raid, are claiming that Allred snookered Riverside County cops into becoming accomplices to a bee heist. They’re suing Allred, Riverside County, and the sheriff’s department in California superior court, claiming that the defendants seized their bees without a warrant or permission.

The dispute highlights the growing value of bees. Bill Lewis, the president of the California State Beekeepers Association, says bee theft is slowly climbing in the United States—as it is in Australia, England, and New Zealand—and the payoff for a successful heist is skyrocketing. Harsh pesticides and the rapid spread of parasitic mites have caused many commercial colonies to collapse, while lucrative corn and soybean crops have gobbled up fields of clover and wildflowers where bees once did most of their feeding.

At the same time, farmers’ need for bees has exploded. The state of California has tripled its almond production since the mid-1990s and now supplies 82 percent of the planet’s almonds. Bees are raised in nearly every state in the lower 48, but the vast majority are hauled west every winter to pollinate California’s 800,000 acres of almond trees. Each acre requires two colonies. During peak pollination season, a healthy, mature bee colony can fetch $200. When bees go missing, the likely thief is a beekeeper who couldn’t fulfill all his contracts with farmers after his bees languished. 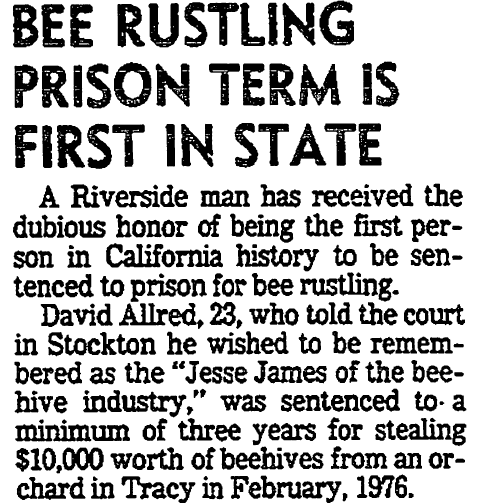 Allred, it turns out, is a notorious beenapper with several convictions for bee theft. In 1977, he became the first person in the state of California sentenced to prison for stealing $10,000 worth of bees using two stolen trucks. (He was sentenced to at least three years and served more than six.) The Los Angeles Times reported that during his sentencing hearing, Allred told the court that he wanted history to remember him as the “Jesse James of the beehive industry.” (Allred denies saying this.)

But by the time the sheriff’s department became aware of Allred’s history, it had already given the confiscated bees to Allred’s insurance adjuster, who put Allred in charge of storing them. About two months after the raid, the cops asked Allred’s insurance adjuster to return the bees to Manning and Olney. But Manning and Olney say that when they got their bees back in early February, someone—they claim Allred—had stolen the queens and replaced healthy bee colonies with sickly ones. Their lawsuit claims defamation, trespassing, violation of civil rights, negligence, interference with their business, and at least $25,000 in damages.

“That’s bullcrap,” Allred said when I informed him of the lawsuit. He maintains that the sheriff’s department seized hives that belong to him. “[Manning and Olney] are the ones who ripped me off. And I’m getting ready to sue them.” He says many of the bees were already dead when the sheriff’s department confiscated them, and denies damaging the hives or stealing the queens.

Allred has been in and out of the bee industry since his convictions in the 1970s. He claims the hives the cops confiscated from Manning and Olney included some of the 120 hives that vanished from his beekeeping operation on New Year’s Eve 2012. According to Allred, these hives disappeared just as he was getting his bee business back off the ground after a flash flood in the Imperial Valley wiped out half his colonies. He filed a police report, collected about $23,000 in insurance, and went searching for his hives. He claims he found them last May on the watermelon farm. Allred says he convinced the sheriff’s department to back him up after his insurance adjuster showed the cops stamped markings on the bee boxes that he says proved they were his missing hives. Some of the frames the cops collected at the scene, Allred says, still had telltale mud on them from the 2012 flood.

A spokesman for the sheriff’s department declined to speak about the affair since it is now the subject of an ongoing lawsuit. A spokesman for Riverside County did not reply to requests for comment.

But a police report Grassel filed in the aftermath of the mid-December bee raid seems to acknowledge that his department helped Allred confiscate Manning and Olney’s bees. The report speaks to the difficulty of thwarting bee theft; Grassel’s efforts to sort out who owned the bees using California’s outdated system for bee-tracking constitute a minor epic.

As Grassel tried to untangle what had happened, he spoke with Michele Tracy, an investigator for the Riverside County Agricultural Department. “Tracy told me Allred is not a person to be trusted,” Grassel wrote in his report. “She told me she could not believe Allred had gotten me to get involved in this case.”

Tracy determined that Grassel was probably hoodwinked. The records that Allred had shown the sheriff’s department were outdated, she said. Tracy’s records showed that a bee broker named Christopher Lankford had begun using the boxes with Allred’s numerical stamp on them many years ago. After the raid, Manning and Olney showed the sheriff’s department a receipt indicating that Olney had acquired Allred’s old bee boxes from Lankford.

So how did Lankford get the boxes he gave to Manning and Olney? He says he bought them from Allred in the 1990s, although at the time the police report was filed, Lankford still hadn’t shown the sheriff’s department any proof. Allred says Lankford is lying—he’s never sold a box with his name stamped on it. He says Lankford has “a reputation among every beekeeper in California” for unscrupulousness.

According to the police report, however, Allred initially said that he did sell his entire bee business in the ’90s, but then recanted.

“[Allred] can say whatever he wants,” Lankford tells me. “It’s all there, it’s his signature…I got witness signatures. My conscience is clear.”

Allred’s 1977 conviction—the one that landed him in prison—wasn’t his only foray into bee-related crime. The same jury also found him guilty of felony vandalism for poisoning 600 hives belonging to a competing beekeeper in Oxnard, California. And a half-decade earlier, in 1972, a San Bernardino County court convicted him of possession of stolen property after he was found with 400 hives from a Colton, California, honey farm.

The vandalism conviction landed Allred in the pages of People magazine. Together with a beekeeper named David Graves, he had used a cyanidelike gas to kill 15 million of Graves’s neighbor’s bees—all because the neighbor had married Graves’s recent ex-wife.

Allred says this conviction was reversed on appeal. A clerk for the Third District Court of Appeals in Sacramento, where Allred would have appealed his case, says the court destroys records that are more than 20 years old. A search of the archives of newspapers that covered Allred’s arrest, conviction, and sentencing, including the Los Angeles Times, didn’t turn up reports of an appeal. A spokesman for the identification unit of the California Department of Corrections and Rehabilitation says that Allred was admitted into prison on April 5, 1977—six days after the Times reported his sentencing—and remained in prison until August 1983.

Walter McInnis, Allred’s defense attorney in the bee-slaying case, does not recall Allred filing an appeal. The prosecutor, Kenneth Meleyco, doesn’t have any recollection of a successful appeal, either—although he distinctly remembers Allred.

“He was really something else,” Meleyco says. “Quite a character.” Meleyco recalls asking Allred on cross-examination about a suspicious visit Allred made at 11 o’clock at night to an orchard where someone else’s bees were kept. He says Allred explained that he was with a 16-year-old girl. “When I asked him, ‘What were you doing with a 16-year-old girl out in the orchard,’ he said, ‘Oh, we were playing strip poker.'”

Allred didn’t respond to messages asking for comment about his conviction or testimony.

Today, Allred characterizes his bee convictions as a sort of vigilantism. “In the past,” when his hives were stolen, “if I found my stuff, I went and took it back. I didn’t deal with law enforcement.” He notes that Manning and Olney are also convicted felons: Manning has a battery conviction for sexually abusing a surgical patient while he was a student nurse and Olney has been convicted for “lewd or lascivious acts with a child.”

Based on this ordeal, Allred says he won’t deal with the law again. He quotes a West Virginia judge he met at a beekeepers convention. “He told me, ‘When the legal system fails you,'” when your property goes missing, “‘it’s your right as an American citizen to take it back yourself.'”