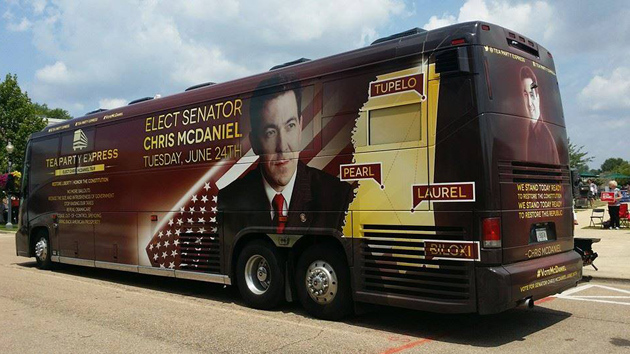 Tea party favorite Chris McDaniel spent the final weekend before Tuesday’s Mississippi Republican senatorial run-off campaigning with a conspiracy theorist who has alleged that President Barack Obama is a “Manchurian candidate” working as part of a secret plan to “destroy the country.”

The remarks, first reported by Right Wing Watch, were made by former Libertarian presidential candidate Wayne Allyn Root who has been pushing this anti-Obama charge for years. This past weekend, Root—who was a classmate of the president at Columbia University—traveled throughout Mississippi on a bus paid for by the Tea Party Express and spoke at rallies in support of McDaniel, who is trying to defeat incumbent Sen. Thad Cochran in a hotly contested race. McDaniel accompanied the bus for three events this past weekend.

During a rally in Biloxi, McDaniel took the stage after Root fired up the crowd with his anti-Obama rant. At that event, Root noted that the shadowy effort dates back to the early 1980s:

It’s a purposeful plan to wipe out America, capitalism, the middle class, and destroy American exceptionalism and Judeo-Christian values. How do I know? Listen to this, folks. Because I’m Barack Obama’s college classmate, Columbia University class of ’83. And when I was there at Columbia, we all studied a plan called Cloward–Piven—if you’ve ever watched Glenn Beck—Cloward–Piven. And we studied Saul Alinsky. And the plan was get someone elected president, who looks fantastic, who has a beautiful wife, a beautiful children. A family man. Get him to cut his afro or his long hair, his ponytail. Put on a suit, and then lie to everybody. Make sure they know he’s a moderate, not a communist…and then destroy the country by overwhelming the system with spending, with taxes, with regulations, with debt, with entitlements, with food stamps. Overwhelm it until it collapses.”

We both graduated on the same day. We both graduated political science majors. We both graduated pre-law. And I knew every human being at Columbian University in the political science department. And they all knew me. Seven hundred students. One Reagan conservative—me. And 699 Marxist communists and socialists. And you know who I didn’t know? Never met him, never heard of him, never saw him. Didn’t know another student at Columbia who ever met him, knew him, or saw. Barack Hussein Obama! Isn’t that amazing! Now I just got back from my 30th college reunion and I searched out every one of my classmates who ever knew Barack Obama. Not one. Ladies and gentlemen, our nation is now being run by the Manchurian candidate. The real-life Manchurian candidate.

Before and during the campaign, McDaniel has showed no reluctance to associate himself with advocates of extreme right-wing views. He has hobnobbed with neo-Confederates and anti-gay crusaders. None of this has become a campaign issue.