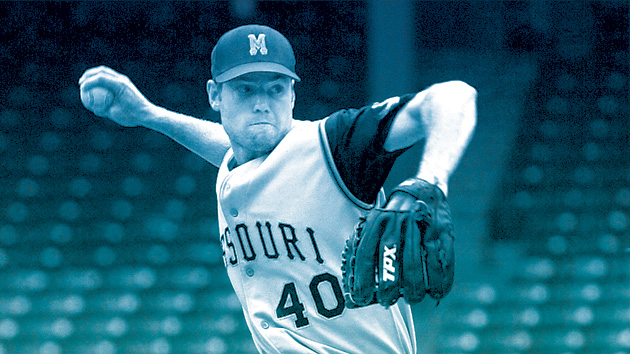 Garrett Broshuis, back when he pitched at the University of MissouriLM Otero/AP

Garrett Broshuis’ first job out of college took him to Salem, Oregon, where he worked six or seven days a week, usually from around three in the afternoon to midnight or later. That didn’t include the hundreds of hours on cramped buses to towns as far away as Boise and Vancouver. Many of his coworkers lived in employer-provided housing, sleeping in the bedrooms of host families’ college-bound kids or on basement futons. They were paid $1,100 a month. “Professional baseball,” Broshuis says, “was disappointing from the first week I was there.”

Broshuis was a pitcher in the San Francisco Giants’ minor league system, a University of Missouri right-hander selected in the fifth round of the 2004 draft and sent to play for the Salem-Keizer Volcanoes of the Class A Northwest League. The minors are filled with players like Broshuis who probably won’t make it to the show but are crucial to fill out rosters and help develop major league talent. (About 10 percent will make it to the majors.) But even as Major League Baseball is booming, raking in more than $8 billion annually, these players are shut out from the profits. Since 1976, the rock-bottom salary in the majors has gone up more than 2,500 percent; in the minors, it has gone up less than 70 percent. Starting pay for minor leaguers is between $1,100 and $2,150 a month, and only during the season, which can be as short as three months. “The average baseball fan knows that minor leaguers aren’t getting rich,” Broshuis says. “But I think the average baseball fan is shocked to know what the salaries actually are.”

Now that he’s hung up his glove to practice law, Broshuis thinks he’s found a way to change that. In February, he helped file Senne v. MLB, a federal lawsuit on behalf of 20 former minor league players who allege that Major League Baseball violated the Fair Labor Standards Act and state laws by paying them less than minimum wage and failing to compensate them for overtime. “I think it’s a pretty novel approach,” says Michael McCann, a law professor and director of the University of New Hampshire’s Sports and Entertainment Law Institute. “Wage law is not an area that’s been brought up frequently in sports law.”

Broshuis (pronounced BRUSH-house), who now works in St. Louis, considers himself one of the lucky ones—he did, after all, collect a six-figure signing bonus before heading to the minors. Most of his teammates, he recalls, signed for a thousand bucks and relied on their parents to pay cellphone bills and rent. The family that housed Broshuis lent him a beat-up truck to drive players to the ballpark; team meals consisted of peanut butter and jelly sandwiches or cold-cut trays. When the offseason came around, everyone scrambled to find temporary work, often relying on private lessons to get through the winter.

“Baseball’s tough for a smart person,” says Dirk Hayhurst, a longtime minor leaguer and author of the acclaimed The Bullpen Gospels. “Not that it’s full of stupid people, but I would say that people who question the system don’t really survive well.” Plus, because they hear about the huge salaries awarded to the likes of Zack Greinke or Miguel Cabrera, “fans have zero sympathy for you.”

“They’re chasing this boyhood dream that they’ve been after since they were three or four years old,” Broshuis says. “So guys are reluctant to do anything that might place that dream in jeopardy.”

Broshuis was writing a column for Sporting News (and later Baseball America) and thinking ahead to a law career, so he started talking to labor lawyers about the wage issue. He found Don Wollett, a retired attorney whose book Getting on Base: Unionism in Baseball lays out the case for a minor league union. The Major League Baseball Players Association is sports’ strongest union, but it doesn’t represent minor leaguers and often signs away their rights in collective bargaining agreements struck with team owners. Minor league umpires and minor league hockey players have successfully unionized, though, and Broshuis figured baseball players were next. Yet players were worried about rocking the boat. “They’re chasing this boyhood dream that they’ve been after since they were three or four years old,” Broshuis says. “So guys are reluctant to do anything that might place that dream in jeopardy.”

As Broshuis talked up unionization, his big league dreams were fading. He finished with a 3-17 record in 2007, tying for the most losses by a minor league pitcher that season. Though he bounced back in 2008, at the end of spring training in 2009 the Giants’ brass told Broshuis he wasn’t in the team’s future plans. He stuck around for one final season and took the LSAT three days after the season ended. “I went to law school to find a career,” he says, “but I also went in part to find a solution to this problem.”

Figuring out a way around MLB’s antitrust exemption was the first order of business. The exemption, in place since 1922, shields teams from allegations of monopolistic business practices, such as colluding to suppress minor leaguers’ wages. But it doesn’t protect MLB from federal wage and overtime laws, which is why Broshuis’ case focuses on unpaid and extra work, from seven-day-a-week schedules to mandatory offseason workouts. McCann thinks the suit, one of a surge of sports-related cases targeting everything from concussions to college athlete unionization, signals big changes not seen since the free-agency lawsuits of the 1960s and ’70s. However, if Senne gets past MLB’s initial motion to dismiss, it will likely take years to litigate, particularly if it expands into a class-action suit.

“Baseball’s slow to change, thinks it’s in the right, and has a ton of money. So it’s going to make these poor, pathetic minor lea­guers—who everybody looks down upon—go through hell to get it done,” Hayhurst says. “But I think after it’s done these guys will look like heroes.”