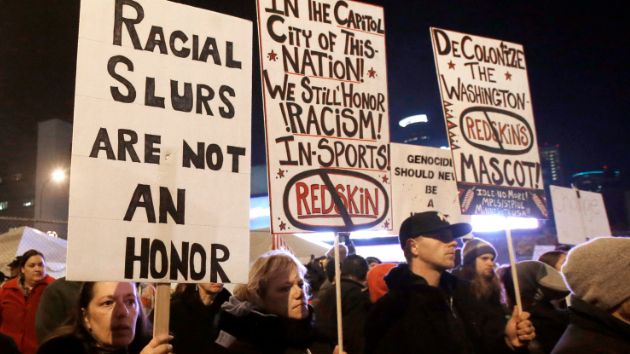 On Wednesday, the US Patent and Trademark Office terminated six federal trademark registrations held by Washington’s pro football team. The PTO’s Trademark Trial and Appeal Board ruled that the team’s name cannot be protected, because it disparages Native Americans and federal law bans the trademarking of offensive language.

The decision is a victory for Amanda Blackhorse, a 32-year-old member of the Navajo Nation who became the face of the legal fight to revoke Washington’s trademarks starting in 2006. She was leading protests of the name when the law firm Drinker Biddle & Reath asked her to become the lead of five petitioners in its case against the Washington football team.

Blackhorse spoke to Mother Jones Wednesday about the ruling, the other professional sports teams in her crosshairs, and her own run-ins with racist Washington football fans.

Mother Jones: So you must be pretty excited today, right?

Amanda Blackhorse: We started this campaign eight years ago. So yes, today, it’s pretty overwhelming, but in a good way. When you’re part of a case that takes years and years and years, you wait all this time, and now it’s finally here, it’s just a tremendous victory. Not just for the five of us who were the petitioners but for the native country as a whole.

At an NFL game in Kansas City, “people yelled, ‘Go back to your reservation!’ ‘We won, you lost, get over it!’ ‘Go get drunk!’ And so many different slurs…I’ve experienced racism in my lifetime, but to see it outwardly, and nobody did anything?”

I hear the owners are going to file an appeal. I was hoping that maybe they would listen to us, and the majority of Native American people who have spoken out on this, and said, “We’re done fighting this thing.” But apparently they want to continue to stand their ground with this. And we’re the same way. We know we’re living in a time when calling someone the R-word is absolutely offensive.

MJ: Why did you get involved with protests of the name in the first place?

AB: Someone once told me—and then I thought about it differently—that mascots are meant to be ridiculed. Mascots are meant to be toyed with. They’re meant to be pushed around and disrespected. To have stuff thrown at them. That’s what I feel like happens at these games. There’s a lot of ridicule of Native American people. You have people walking around in face paint, fake war paint on their cheekbones, feathers in their hair.

MJ: I heard that one of your first protests, at a Washington-Chiefs game in Kansas City, was a pretty nasty experience.

AB: Oh, yes. People yelled, “Go back to your reservation!” “We won, you lost, get over it!” “Go get drunk!” And so many different slurs. People threw beers. That, to me, was shocking. I’ve experienced racism in my lifetime, but to see it outwardly, in the open, and nobody did anything? It was shocking.

That was the game where there was a port-a-potty in the shape of a teepee.

MJ: Has anyone ever called you the R-word, or have you heard it used against another Native American?

AB: No, and I’ve never heard a Native person call another Native person a redskin. I’ve been called a “stupid Indian.” I’ve been called a “savage” and a “squaw.” Not too long ago, there was a person who wrote a letter to the editor in our local newspaper, the Navajo Times, and this guy wrote in there that he’s “tired of the drunken redskins.” So people do continue to use that slur to this day. I couldn’t believe that was even printed.

MJ: How has it felt seeing so many lawmakers and news outlets side with you and condemn Washington’s team name in recent years?

“[Snyder] acts like he’s invincible. No matter what we say, I don’t think he’s going to change the name unless he’s forced to.”

AB: It’s tremendous. It’s great. I’m hoping that more of the NFL community would speak out, but it’s so great to see after all these years how this movement has grown. But Native Americans still need to demand respect for ourselves. That’s the point here. We need to stand up for ourselves in the general population and not allow people to push us around and stereotype us.

MJ: Would you like to see other teams change their names? Take the NHL’s Chicago Blackhawks, for example. It’s not a slur, but…

AB: Yes—it’s not a slur but it’s an appropriation of our culture. Any team name that references Native Americans, I think should go. No matter which way you swing it, you as a team owner and we Native Americans have no control over the type of imagery fans are going to seize on at your games.

I think that the Cleveland Indians logo is one of the most disrespectful representations of a Native American man out there. It’s awful. It’s cartoonish.

MJ: What would you say to Dan Snyder, who owns the Washington football team?

AB: I feel like no matter what we say to him, they’re not going to budge. The change will come from the political process. And some of it has to come from his fan base. From people in the area. I’m way out here in the middle of the Navajo Nation.

We knew early on that there was a lot of money at stake for the team. That this was all about money. And money talks. [Snyder] acts like he’s invincible. No matter what we say, I don’t think he’s going to change the name unless he’s forced to.