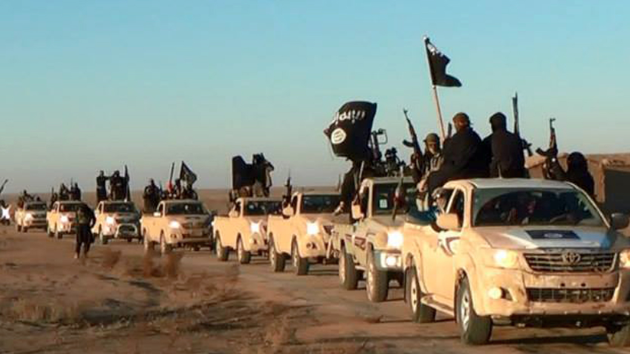 A convoy of fighters with the Islamic State of Iraq and Syria, an Al Qaeda-linked groupAP

With the crisis in Iraq intensifying, conservative media outlets have searched for a fall guy and found one: President Barack Obama. In recent days, conservative websites have peddled the claim that it was Obama who freed the leader of the Islamic State of Iraq and Syria (ISIS), the Al Qaeda-inspired Islamic militant group currently overrunning cities in northern Iraq and threatening Baghdad. Referring to Abu Bakr al-Baghdadi, who heads ISIS, the Daily Mail asserts, “Obama SET FREE the merciless terrorist warlord now leading the ISIS horde blazing a trail of destruction through Iraq.” Right-wing author David Horowitz’s FrontPage Magazine claims Baghdadi, who was once held by US forces in Iraq, was released “on Obama’s watch.” And RedState.com says Baghdadi was let go under the Obama administration’s “policy of releasing terrorists.” But they have it wrong: It was an agreement signed by President George W. Bush in 2008 that led to Baghdadi’s release in 2009.

In 2005, US military forces captured Baghdadi. (There are not many public details about his capture or his role then in the ongoing insurgency.) He was held in a US-run detention camp in southern Iraq called Camp Bucca, where he remained for several years.

In 2008, while reducing the numbers of US troops in the country, Bush signed an agreement with the Iraqi government that mandated that all detainees be handed over to Iraqi forces. In accordance with this agreement, Baghdadi was transferred to Iraqi custody in 2009, and by 2010, the Iraqi government (for a reason not explained publicly) had set him free. That same year, Baghdadi assumed leadership of ISIS. He has since been dubbed “the new bin Laden.”

It’s not as if Bush could have prevented Baghdadi’s release by maintaining control over detainees—in part because his administration had so screwed up on this front. (See Abu Ghraib.) At the time, “the United States’ detainee programs had become a black eye,” says Patrick Johnston, an expert on Iraqi insurgent groups at the RAND Corporation. US-run detention facilities were overcrowded; some prisoners were tortured. Continuing a large US-controlled detainee program “was a political nonstarter,” he adds.

Once detainees were out of American hands, “the United States has relatively little leverage over its friends’ and allies’ choices,” says Jacqueline Hazelton, a counterterrorism expert at the Naval War College. (She does not speak on behalf of the college.) And there was no telling what the Iraqis would do with the tens of thousands of suspected insurgents handed over.

As for Baghdadi, he was not identified as a particularly dangerous detainee. “He was a bad dude, but he wasn’t the worst of the worst,” Kenneth King, the former commander of Camp Bucca, told Fox News last week.

Many other prisoners like Baghdadi were released once the United States transferred them to the Iraqis, says Theodore Karasik, the director of research and consultancy at the Institute for Near East and Gulf Military Analysis. And this is not an uncommon practice. Afghanistan, which last year took control of the last US-run detention center there, has already released prisoners against US objections.

Last week, Baghdadi’s Sunni terror group, which counts up to 10,000 members, seized the cities of Mosul and Tikrit, routing US-trained Iraqi troops with stunning speed. ISIS, which sprouted up after the US-led invasion in 2003, is said to make “Al Qaeda look old-fashioned”; it is extra ruthless, well funded, and Twitter savvy. The militant group already controls parts of northern Syria and much of western Iraq, and it is fighting to take control of nearly two dozen more major Iraqi towns and cities.

Under Baghdadi’s leadership, ISIS has become a profound and vexing threat to the Iraqi government and the region, but his rise to power cannot be pinned on Obama. If conservatives want to cite Baghdadi’s release as a cause of the current crisis, then they should focus on the guy in charge before Obama.

(Read more about what’s going on in Iraq here.)