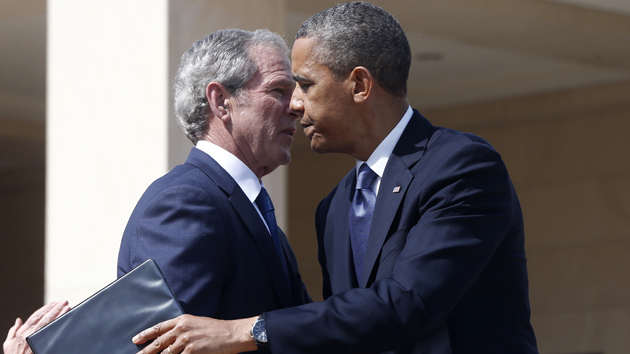 President Barack Obama and his administration have come under fire following a string of revelations about the huge backlogs of patients at Department of Veterans Affairs clinics and the underhanded tactics many of them used to hide the long wait times for medical care. As of Thursday evening, more than 100 lawmakers were calling on Secretary of Veterans Affairs Eric Shinseki to step down. But according to VA inspector general reports and other documents that have gone overlooked in the current firestorm, federal officials knew about the scheme at the heart of the scandal—falsifying VA records to cover up treatment delays—years before Obama became president. VA officials first learned of the problems in 2005, when George W. Bush was entering his second term, and the problems went unfixed for the duration of his presidency.

The underlying issues date back even further. In 1995, as part of a broader overhaul, the VA began pressing clinics to cut wait times for new patient appointments to 30 days. But there was no system for tracking which facilities were meeting this target until 2002, when the VA introduced electronic waiting lists to keep tabs on patients who couldn’t be seen within a month. Managers who slashed wait times were given bonuses and other perks. This created an incentive to game the system, especially after veterans of the Iraq and Afghan wars began flooding into VA clinics and straining their already stretched resources.

The efforts to mask delays burst into public view last month, when CNN reported that at least 40 patients—many of whom never made it onto electronic waiting lists—had died while awaiting care from the VA system in Phoenix.

Since then, the VA has faced a volley of scathing allegations about the use of “secret” paper waiting lists to hide lengthy treatment lags. These accusations echo the findings of a 2005 VA inspector general’s report that documented a raft of violations—including the widespread use of paper lists in place of the electronic ones to hide the glut of veterans awaiting appointments. The report urged the Veterans Health Administration “to ensure the electronic waiting list is complete and accurate” and proposed steps to remedy the problem.

Two years later, another inspector general audit found that the VA had failed to act on these recommendations and that schedulers were still using paper lists and other tactics to mask the backlogs. The report recommended that the VA “establish procedures to routinely test the accuracy of reported waiting times and the completeness of electronic waiting lists, and take corrective action when testing shows questionable differences.” At the time, the VA agreed to convene a work group to tackle the issue. A VA spokeswoman declined to comment on whether it had actually done so.

After the 2007 audit, the inspector general’s office continued to field complaints about schedulers cooking the books. In 2008, then-Sen. Daniel Akaka (D-Hawaii), the chairman of the Senate Committee of Veteran Affairs, asked the inspector general to investigate allegations that supervisors at VA facilities in northern Florida and southern Georgia were “manipulating their waiting list.” The IG later received an anonymous tip alleging that managers in the Portland VA hospital were instructing employees “to use paper wait lists to hide the access problems,” which had created a backlog of more than 3,500 patients in one clinic alone.

White House spokesman Jay Carney says the commander in chief was unaware of these allegations until news of the Phoenix VA scandal hit. But according to a memo obtained by the Washington Times, Obama’s transition team briefed him on the issue before he took office. The document noted that scheduling problems were “systemic throughout” the VA medical system and that the agency had made “only limited progress in addressing” issues such as the “accuracy of reported waiting times, and completeness of electronic waiting lists.”

“This is not only a data integrity issue,” the memo continued. “It affects quality of care by delaying—and potentially denying—deserving veterans timely care.”

VA higher-ups certainly knew about the ongoing problem. In April 2010, William Schoenhard, the VA’s deputy undersecretary for health for operations and management, sent a lengthy memo to the VA’s regional directors that outlined 17 “gaming strategies” schedulers were using to hide treatment delays—including paper waiting lists. Politicians and pundits have seized on this as evidence that the Obama administration dropped the ball. And Robert Petzel, the undersecretary of health for Veterans Affairs, was forced to step down after being confronted with the memo during a congressional hearing earlier this month. But the 2010 memo shows that the VA took some steps to solve the problem. Schoenhard called on VA network directors across the country to take “immediate action” to “identify and eliminate” the gaming strategies and offered detailed instructions for detecting these schemes, which he warned “will not be tolerated.”

The White House would not comment on what happened with these efforts to address the waiting list problems, but in a statement to Mother Jones it said that the VA had “been working on the issue of inaccurate reporting for many years” and that administration officials were “working to assess the full scope of this issue so we can fix it and ensure that veterans have timely access to care.”

While the VA pressed its managers to redress the backlog, the Obama administration opened the VA health system to a flood of new claims. In 2010, the administration expanded treatment for post-traumatic stress and diseases stemming from Agent Orange exposure—a move that veterans and their advocates had sought for decades. Just how much this added to the backlog is unclear, but the Government Accountability Office found that Agent Orange cases consumed 37 percent of the VA’s claims-processing resources between October 2010 and March 2012.

More than 40 VA systems across the country are now under investigation for allegedly using paper lists and other strategies to hide backlogs. An interim report on the Phoenix VA released by the inspector general on Wednesday found that more than 1,700 veterans were missing from electronic waiting lists and were “at risk of being lost or forgotten.” ?Shinseki called these findings “reprehensible” and pledged to fix the problem. But his future is looking increasingly shaky, as more lawmakers call for his resignation. The nation’s largest veterans group, the American Legion, is also demanding he step down.

Other veterans organizations, meanwhile, are wary of pinning blame on a single official or administration. “This is not a new problem,” says Rick Weidman, executive director of government affairs at Vietnam Veterans of America. “But the media latched onto the idea of ‘secret lists’ and suddenly it exploded. Instead of buying into the hysteria and finger pointing, we should be addressing root problems.”