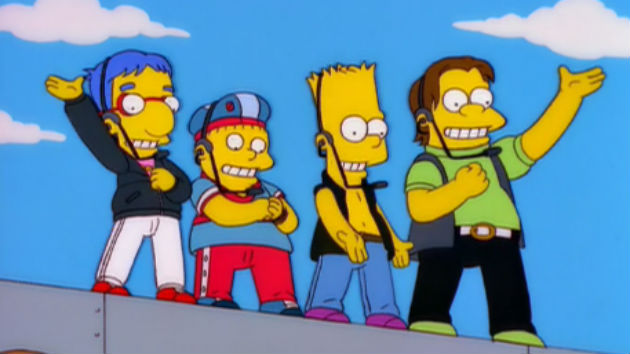 There is a new theory that an episode of The Simpsons (one that aired on February 25, 2001) predicted the Syrian uprising and civil war, and also that the episode is proof of a massive international conspiracy that laid the groundwork for the Arab Spring.

You read that right.

The conspiracy theory was recently proposed by anchor Rania Badawy on the Egyptian TV channel Al Tahrir. Badawy insists that the Simpsons episode “New Kids on the Blecch“—in which Bart, Nelson, Ralph, and Milhouse are recruited into a boy band called the Party Posse—contains clues that suggest “what is happening in Syria today was premeditated.”

Here’s the segment, which was flagged by the Middle East Media Research Institute:

In the episode, the boys star in a music video for “Drop Da Bomb,” a pop song that seems to encourage heroic bombing of hostile Arab countries. (“Your love’s more deadly than Saddam / That’s why I gotta drop da bomb!“) The chorus of the tune is “Yvan eht Nioj,” which is “Join the Navy” backwards; the Party Posse turns out to be a secret project by the US Navy to boost recruitment numbers through subliminal messages.

Badawy, the astute television anchor, noticed that the soldiers bombed in the music video (posted below) have a car emblazoned with a version of the Syrian flag that looks an awful lot like the ones Syrian rebels and protesters waved in 2011. “How it reached this animated video nobody knows, and this has aroused a debate on the social networks,” she says. “This raises many question marks about what happened in the Arab Spring revolutions and about when this global conspiracy began.”

Not that you need it at this point, but the New York Times has a thorough rundown of why—when you factor in “crucial aspects of both Syrian history and details of the Simpsons episode”—this is all so silly.

Still, I thought I’d ask Al Jean, a longtime Simpsons executive producer, what he thought about this interesting theory. Jean sent along the following brief statement:

Yes, we had the amazing foresight to predict conflict in the Middle East.

Somehow, I doubt the heavy sarcasm in Jean’s admission will register with certain conspiracy theorists. There are also wacky theories out there that The Simpsons predicted the 9/11 terrorist attacks. Also, there’s a fun post on the 11 times The Simpsons “predicted” the future of technology.

Now here’s the “Drop Da Bomb” music video that is complicit in the bloodshed in Syria, I guess: