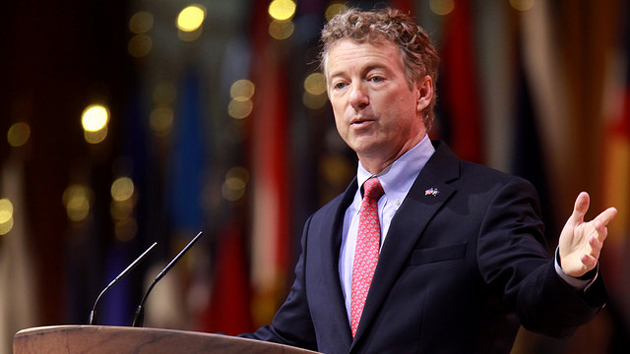 This week, the top headlines on GOP Sen. Rand Paul’s official website ostentatiously proclaim his support for Israel. On Monday, the lead item noted that Paul, a foreign intervention skeptic who’s been accused of isolationism by the Dick Cheney/neocon wing of the Republican Party, intended to introduce legislation that would end US aid to the Palestinian government until it recognizes Israel’s right to exist. The next day, Paul’s website announced that the senator had introduced the “Stand with Israel Act of 2014,” which would make all future aid to the Palestinians conditional on the new unity government—the result of the recent deal struck by Hamas, which controls the Gaza Strip and does not recognize Israel, and Fatah, which is based in the West Bank—acknowledging the right of Israel to exist and to exist as a Jewish state. The bill was widely regarded as a brazen effort by Paul to get right—or somewhat less wrong—with the GOP’s foreign policy mainstream. But the reporting on Paul’s bear-hug of Israel left out a rather relevant fact: Not too long ago he was calling for cutting off funds to…Israel.

Just weeks after Paul was sworn in as a senator in early 2011, he proposed a budget plan that would end all US aid to Israel. The US supplies about $3 billion in military assistance to Israel annually. And Paul wanted to zero it out with all other foreign aid. He explained that he didn’t have anything against Israel: “I’m not singling out Israel. I support Israel. I want to be known as a friend of Israel, but not with money you don’t have.” He added, “I think they’re an important ally, but I also think that their per capita income is greater than probably three-fourths of the rest of the world. Should we be giving free money or welfare to a wealthy nation? I don’t think so.”

This stance didn’t endear Paul to the pro-Israel hawks who have long been dominant within the GOP. And in later years, when he was asked about US assistance to Israel, Paul tried to argue that US financial support was actually not in Israel’s best interest because it created a sort of welfare dependency for that nation. After taking a trip to Israel at the end of 2012, he told reporters, “I’m for an independent, strong Israel that is not a dependent state, not a client state.” He contended that Israel would be better off it weren’t so dependent on US assistance. During a July 2013 interview on Fox News, Paul did not explicitly reiterate his call for cutting off money for Israel, but he pushed this more refined message: “Well, I’m a big supporter of our alliance with Israel and nothing should come between that but I would say that we are also big allies with Britain and we don’t send them any money. So ultimately the best thing that is—what is in the best interests of every country is self-sufficiency.”

So Paul had savvily altered his rhetoric from an explicit demand to turn off the tap to Israel (and other countries) to a positive-sounding call to lessen Israel’s reliance on Washington. Now Paul has dramatically switched his focus to aid that goes to the Palestinian government. In a statement about his new bill, he said nothing about US assistance to Israel. And he has gone a step further, backing Israeli Prime Minister Binyamin Netanyahu’s demand that the Palestinians must recognize Israel as a Jewish state. With these stances, Paul has firmly entered neocon territory.

Paul’s shifts are not that surprising. In early 2013, a Paul aide named Jack Hunter—who was later outed by the Washington Free Beacon as a onetime neo-Confederate activist and a pro-secessionist radio host known as the Southern Avenger—wrote on his Southern Avenger website that Paul’s public support for Israel was a “little rhetorical concession” that “goes a long way.” Hunter explained, “Some say Rand is not Ron [Paul, his father] because he is ‘willing to play the game.’ That’s exactly right. That’s the point—to play it, influence it, and win it as much as you can. The neoconservatives certainly do, to their advantage.”

Not surprisingly, a Paul spokesman told the Free Beacon that Hunter had not been speaking for Paul. No senator’s aide would ever publicly acknowledge such cold political calculations. But Paul’s recent move certainly suggests a calculation—and a very obvious one for a possible 2016 presidential contender.