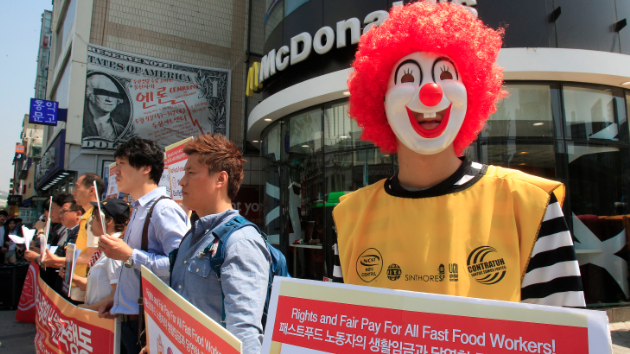 A protester in Seoul, South Korea at a rally Thursday to demand higher wages for fast-food workers.Ahn Young-joon/AP Photo

On Thursday, the fast-food strikes that have been spreading around the country are going global.

Workers at restaurants like Burger King, McDonald’s, Wendy’s, and KFC are walking off their jobs in 230 cities around the world to demand a minimum wage of $15 an hour and the right to form a union without retaliation. Strikers will protest in 150 US cities, from New York to Los Angeles, and in 80 foreign cities, from Casablanca to Seoul to Brussels to Buenos Aires.

In Zurich, some protesters are wearing “sad hamburger costumes.” In the Philippines, protestors staged a flash-mob at a Manila McDonald’s during morning rush hour.

The wave of strikes—which began in November 2012, when hundreds of workers walked out of restaurants in New York City—has grown quickly over the past year and a half. The idea behind this coordinated international protest was not just to further raise the profile of the fast-food workers’ movement. With labor unions declining in clout at home, organizers hope that the powerful international unions can help pressure US-based companies into making changes. Last week, the International Union of Food, Agricultural, Hotel, Restaurant, Catering, Tobacco and Allied Workers’ Associations—a labor federation composed of 396 trade unions that represent 12 million workers in 126 countries—held a summit in New York City where fast-food workers and union leaders finalized plans for the global strike.

The massive fast-food protests come a few weeks after a recent report on the industry by the left-leaning think tank Demos found that fast-food CEOs are paid a thousand times more than the average franchise worker, who makes about $8.69 an hour. Fast-food wages have dropped by 36 cents an hour since 2010. More than half of the families of fast-food workers rely on public programs like food stamps and Medicaid. (Check out our calculator to see if you could live on a fast-food wage.)

Though the industry has not yet raised wages by any significant amount, the strikes are having an effect. In a March filing with the Securities and Exchange Commission, McDonald’s said worker protests might force the company to raise wages this year. And as Salon‘s Josh Eidelson reported earlier this month, the National Restaurant Association, the industry trade group, is growing increasingly worried about the fast-food protests, closely monitoring social media for plans of future actions.

And while Congress is unlikely to raise the federal minimum wage any time soon to the $10.10 an hour wage President Obama proposed in his 2013 State of the Union speech, states are taking up the fight. Over the past year, seven states and the District of Columbia have raised their minimum wages, and 34 states are considering bumping up pay for their lowest-paid workers. In late April, the mayor of Seattle proposed a $15 minimum wage.

Scott DeFife, an executive vice president for the National Restaurant Association, dismisses the movement’s potential. As he told the New York Times on Wednesday, “These are made-for-TV media moments—that’s pretty much it.”