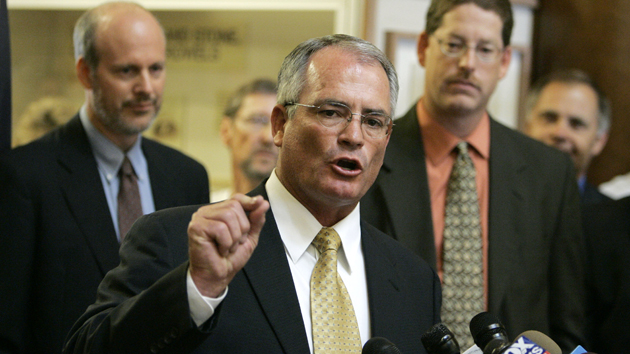 Danny Carroll speaking at a rally in the Iowa statehouse in 2006.Charlie Neibergall/AP

Last month, Danny Carroll became one of the most important unelected Republicans in the country. In a unanimous vote, Carroll, an Iowa state representative from 1995 to 2007, became chairman of Iowa’s Republican Party. Carroll’s elevation to party leader was seen as a victory for the state GOP’s traditionally dominant, social conservative wing. He replaced A.J. Spiker, a libertarian and Ron Paul devotee who resigned in March to work for the leadership PAC of Sen. Rand Paul (R-Ky.), a possible 2016 contender. Carroll rose through the ranks by defining himself as a social crusader, fighting against same-sex marriage and for other so-called family-values causes. When he lost reelection to the state legislature in 2006, he became a lobbyist for a series of groups focused on social conservative fights.

But one incident from Carroll’s past reveals a non-family-friendly style of doing business. During his days as a real estate agent in the 1990s, Carroll was involved in a questionable transaction that denied an elderly widow the chance to make tens of thousands of dollars off the sale of her home—a deal that ultimately resulted in Carroll’s business partner being suspended from practicing law in the state of Iowa.

In 1996, Cora Creamer, then in her 60s, had run into money problems. Her husband of 27 years had passed away from cancer in 1990. Despite owing no mortgage debt on her home in Las Vegas (where the Creamers had moved after residing in Grinnell, Iowa), Creamer couldn’t keep up with the cost of the house. She owed over $7,900 in back taxes and other payments. Creamer approached an Iowa lawyer named Brian Bisbee about her financial problems. That’s when Carroll entered the picture.

Being a legislator in Iowa isn’t quite a full-time career (the state pays them just $25,000 per year). Most state lawmakers hold side-jobs to make extra income. Carroll held a variety of jobs during his 12 years in office—including pumpkin farm owner and telecom executive—and had a side-business as a real estate agent in Grinnell. How exactly Carroll became involved in the matter is unclear, but he wound up paying off the bulk of Creamer’s debt in exchange for a 50-percent ownership stake in her house.  Records show that on November 15, 1996, Carroll paid Creamer $6,171.39. Bisbee notarized the deed.

According to Clark County, Nevada property records, the home was valued at $92,500 at the time. In June 1997, Carroll and Creamer sold the property to the Housing Authority of the City of Las Vegas for $102,000. (Bisbee again only pops up as the notary, while Carroll is listed as the co-owner of the property.) Carroll’s investment reaped a massive profit, while Creamer lost out more than more than $40,000 she could have pocketed (accounting for taxes and fees) had she not sold a large interest in her home at a huge discount.

The details of the transaction came to light a few years later when Bisbee’s law partner reported him to the state ethics committee. The partner contended at the time that Bisbee should have shared profits from this deal with the firm. (It’s not clear why Bisbee would have profited from the deal, since he was not listed as an owner of the property.) According to a 1999 report from the Iowa Supreme Court Board of Professional Ethics and Conduct, Bisbee claimed that he had provided “financial,” rather than “legal” services and, therefore, did not have to hand over any portion of the profits to his law firm. According to the court’s investigation, Bisbee and Creamer’s share of the profits each amounted to $43,000 after the sale, though it’s unclear how the court determined those figures, given that Carroll’s name had been on the deed for the property.

The Supreme Court’s accounting of the transaction doesn’t name Carroll, but contains a passing reference to an unnamed real estate agent. “A Grinnell realtor evidently advanced the sum needed to cover the delinquencies.” But based on the real estate transaction documents from Clark County, Carroll was the part owner of the house, not Bisbee.

Mother Jones was unable to locate Creamer and Bisbee. Carroll (along with a spokesman for the Iowa GOP) did not respond to requests for comment.

The Iowa court determined that Bisbee had “seriously violated his ethical responsibility” as Creamer’s lawyer and said that he shouldn’t have taken a personal stake in the deal. “Bisbee’s financial entanglement with Creamer, while evidently an isolated ethical misstep, was costly to her,” the ethics board’s report said. The justices decided to suspend Bisbee’s license indefinitely, granting him the ability to appeal for reinstatement after three years (Bisbee had moved from Iowa by this point and has not renewed his license).

The ethics board’s report does not elaborate on Carroll’s role in the deal, but it clearly states that the transaction took place at the expense of a cash-strapped “elderly widow.” The report suggests it was not necessary for Creamer to pay such a steep cost to resolve her debt. Because she owned her home outright, she might have been able to refinance her house to receive the money she needed to pay off her debts. Or perhaps she could have waited to resolve her obligations until after the sale.

Carroll has long been a central player in Iowa social conservative circles. Before becoming party chair, he lobbied for the Family Leader, a conservative organization that spearheaded a successful 2010 campaign to unseat three judges who had legalized same-sex marriage in the state. Carroll has said that banning gay marriage would solve “just about every problem facing society today.” Yet taking advantage of a person in financial trouble doesn’t seem to violate this family-values crusader’s moral code.

Document of Carroll and Creamer selling the property in 1997: