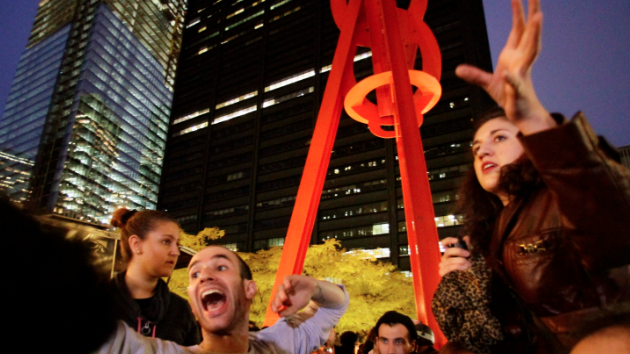 Cecily McMillan on the right, at an Occupy protestBebeto Matthews/AP Photo

Last week, 25-year-old Cecily McMillan became one of the only Occupy Wall Street protesters to face serious jail time when a jury convicted her of assaulting a police officer. Her conviction has sparked outrage amongst progressives because McMillan alleges she involuntarily elbowed NYPD officer Grantley Bovell after he grabbed her breast, and because the judge refused to admit as evidence in the trial certain accusations of police brutality against Bovell and other cops the night of the incident. Assaulting an officer, a felony offense, carries a sentence of between two and seven years of prison time.

“What kind of activist would I be if I wouldn’t go to jail?” said McMillan.

McMillan is currently locked up in Rikers Island jail in New York City, awaiting her sentencing on Monday. Though the judge, Ronald Zweibel, could end up giving her a sentence as mild as a stint of community service, when I chatted with her Friday in a sterile cement room at Rikers, she seemed prepared to do serious time. She was wearing prison-issued Velcro sneakers, her own hipsterish long johns, and horn-rimmed glasses. “I’ve had two years to think about [the] decision” to go to trial instead of accept a plea deal, the 25-year-old said, surprisingly upbeat. “What kind of activist would I be if I wouldn’t go to jail?”

McMillan, a graduate student in liberal studies at the New School in New York City, says she was raised in a trailer park in the “all white, racist” town of Beaumont, Texas, where she says her mother supported her and her brother on $12,000 a year. She saw her brother and many of her friends thrown in jail. McMillan spent her summers in Atlanta with her grandparents, who had been heavily involved in the civil rights movement. From a young age, she noticed racial and economic differences between the two worlds in which she was raised. She was inspired to follow in her grandparents’ footsteps. “To me [activism] isn’t political so much as personal,” she says. “It’s whatever I can do to make life better” for her family and friends—and now her fellow inmates.

As an undergraduate at Lawrence University in Wisconsin, McMillan got into activism, and afterward began working for the Democratic Socialists of America, the largest socialist organization in the United States. She considers herself an anarcho-syndicalist, someone who believes in an anarchic society in which workers take control of the economy. After visiting an Occupy Wall Street encampment in 2011, she decided to get involved in the movement.

The night of March 17, 2012, though, McMillan wasn’t protesting with other Occupiers. She says she was passing through an encampment in Lower Manhattan’s Zuccotti park to pick up an acquaintance after having had a few beers with a friend nearby. As NYPD officers were attempting to escort protesters out of the park, McMillan says Bovell grabbed her breast from behind and she instinctively jabbed her elbow back into his eye. That night, the police officers arresting her used excessive force, according to her lawyer, and she suffered a seizure before being hospitalized for bruises and cuts on her shoulders, back, head, and breast.

During the trial last month, Judge Zweibel forbade the jury from viewing video clips taken that night that purport to show police beating protesters, and would not let jurors hear about an allegation that Bovell had banged another protestor’s head against a bus seat that night. The judge also ruled against allowing McMillan’s lawyer to bring up certain previous allegations of police brutality against Bovell. A grainy 52-second video of the incident convinced the jury that Cecily was guilty of deliberately elbowing Bovell. (Once the jurors found out that McMillan could be sentenced to up to seven years, though, nine of them sent a letter to the judge asking him not to send her to prison at all.)

McMillan was immediately sent to Rikers Island, where she’s been held for two weeks. She says her experience there so far has been a concentrated reminder of America’s failure to adequately address all manner of social ills: drug abuse, mental illness, racism, poverty. “You can see really fucking clearly how fucked up everything is about our society,” she says, her voice rising.

“Seven years would be really, really a lot,” she says slowly. “I’ve got a lot of plans.”

On a personal level though, McMillan says jail life hasn’t been too bad. McMillan sleeps in a dorm with about 40 other women who “all rushed to take care of me” when she arrived. And she has made fast friends with a lady named Fat Baby who hissed and cat-called McMillan when she first got there. “I told her she sounded like a damn construction worker,” McMillan says, and then they bonded.

If Judge Zweibel goes easy on McMillan and forgoes a prison sentence, McMillan says she’ll finish her master’s degree—her thesis is on Bayard Rustin, a leader of the civil rights movement in the 1940s—and keep organizing. She has grand visions about how to fix society. First, she says, we need to start with democratic socialism “to get America on par with the rest of the Western world. Then socialism, then communism, then anarcho-syndicalism.”

But if she’s handed a couple years in jail, McMillan is ready to take it in service of the cause. Maybe “it’s all part of the plan,” she wrote to supporters earlier this month.

And what if the judge gives her the maximum sentence of seven years? She looks down. “Seven years would be really, really a lot,” she says slowly. “I’ve got a lot of plans.”