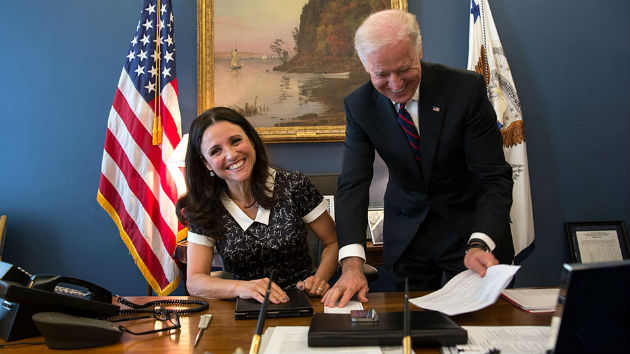 Biden meeting with Julia Louis-Dreyfus (who plays Vice President Selina Meyer on "Veep"), as she sits at his desk in his West Wing office on April 12, 2013<a href="http://www.whitehouse.gov/sites/default/wp-content/uploads/vp_audio/two_vice_presidents.jpg">Lawrence Jackson</a>/The White House

When I spoke with Veep creator Armando Iannucci last year, we had some fun discussing (among other topics) how he does his research for the HBO satire and why he would never, ever, ever allow Joe Biden on the show. But what really stood out to me was when Iannucci talked about his characters’ professional and personal frustrations—and how those frustrations reflect his view of Washington’s effect on the soul:

I don’t want [the characters in Veep] to seem like caricatures—I want them to be viewed as real people, with their own problems, and hopes, and dreams, and frustrations…And it’s that frustration and exasperation that I look for in comedy…What I want to do is show what the system can do to you, and to have [the audience] sympathize with the terrible set of circumstances these characters have to deal with every single day.

Iannucci is a brilliant satirist and a clever political observer. His brand of comedy and commentary (also seen in British TV series The Day Today and The Thick of It, and the latter’s brilliant 2009 spin-off film In the Loop) is a mischievous deromanticization of political and media elites. It’s smart, wildly funny stuff that’s full of carefully constructed, linguistically acrobatic profanity.

But with many of Veep‘s episodes, that sympathy he mentions in the above quote doesn’t always come through. Your average viewer might watch a random episode and come away with the impression that it was written by someone who despised Washington, DC, and all its inhabitants. (Iannucci is actually a self-described “politics geek” who finds DC “fascinating.”) However, in Sunday’s episode, “Alicia” (directed by Chris Morris and guest-starring Tracie Thoms), Iannucci’s humanist outlook is more apparent than it ever has been before in the series. This is the reason why “Alicia” is perhaps the finest episode Veep has yet to pull off.

In the episode, Vice President Selina Meyer (played by Julia Louis-Dreyfus) is about to announce that she’s running for president. Her staff cobbles together an array of Americans—each person representing a specific cause or constituency—to stand behind her during her big speech. One of them is a working mom named Alicia (played by Thoms) who is an advocate for universal child care, a principle Meyer wants to fight for. When Sen. Andrew Doyle (Phil Reeves) catches wind that the veep is mentioning universal child care in her speech, he confronts her, telling her that the program would be a fiscal black hole. He tells her to remove child care from her prepared remarks and to ditch Alicia, and to instead “play it safe” by putting AARP members behind her. Message: Senior citizens matter because they vote; universal child care is a losing issue.

Doyle later issues a thinly veiled threat: If the vice president doesn’t drop universal child care, the congressional leadership will not support her run for office.

“So I’m supposed to let a bunch of dead-eyed white guys shit all over absolutely everything that I stand for?” Meyer says to Doyle. “I’m not gonna let the party dictate to me,” she insists.

Doyle walks out of the room, and Meyer immediately knows she’s lost this round. “SHIT!” she screams, slamming her glasses down onto the desk. She then proceeds to attack the celebratory red, white, and blue balloons floating next to her. Her staff looks on in silence.

“I’ve decided that I’m going to let them dictate to me,” she informs her team. “Because that is my decision. Do you understand that? I am letting them do that. Get it?…But they. Do. NOT. Own me!…No, they don’t! No. They. Don’t!“

Meyer flops down on a chair, dispirited. A member of her staff removes child care from the speech, and another tells Alicia that she will not be standing behind the vice president during her announcement.

This is a beautifully acted moment by Louis-Dreyfus—and it truly gets to the heart of what makes Veep compelling. Beyond the cynicism and the inventive quipping, there’s a scarred humanity to the mischief.