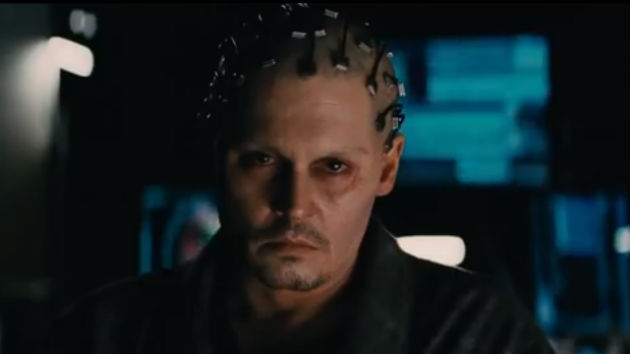 This post contains spoilers, but the movie is bad so I don’t think you’ll care.

Transcendence is an awful movie—two hours of squandered potential. (You can read my colleague Ben Dreyfuss’ review here.) The film stars Johnny Depp, Rebecca Hall, Morgan Freeman, and Kate Mara. It was executive-produced by Christopher Nolan, and marks the directorial debut of cinematographer Wally Pfister (the guy who made Christopher Nolan movies look like Christopher Nolan movies). The plot goes something like this: Depp plays a renowned artificial-intelligence researcher named Will Caster. He gets assassinated by a terrorist group that fears super-intelligent, sentient machines will one day rule the world. Will’s wife Evelyn (played by Hall) has the bright idea to upload his consciousness to a big computer thing, hoping he’ll live on in cyberspace or something. It works, and this achieves technological singularity (when A.I. becomes greater than the human mind), which Will calls “transcendence.”

Things get really creepy and it starts to look like Johnny Depp The Omniscient Computer really is trying to take over the world. The US government begins to wage a secret war on him/it, and gets into bed with some shady, gun-toting characters in doing so.

Anyway, that may sound like a cool premise, but the movie is really, very boring—but it did get me and my buddy thinking: What would our government do if this happened in real life? Does the government have a contingency plan if (as some believe is possible) sentient machines began outdoing mankind? What if the machines went to war against us? What would Barack Obama do???

Okay, this is stupid. But if America once drew up legit plans to invade Canada, maybe there’s a chance we have a plan for this. I called up the Department of Defense, and was transferred to spokesman Lt. Col. Damien Pickart. I asked him these questions, and if anyone working in cyber warfare had anything to say about this. His response:

I’m gonna be frank with you. There is nobody here who is going to talk about that…There are currently no plans for this. It’s just a completely unrealistic scenario. We have a lot of people working on this team on serious stuff, but this just isn’t a real threat.

Here’s the trailer for the Johnny Depp movie: