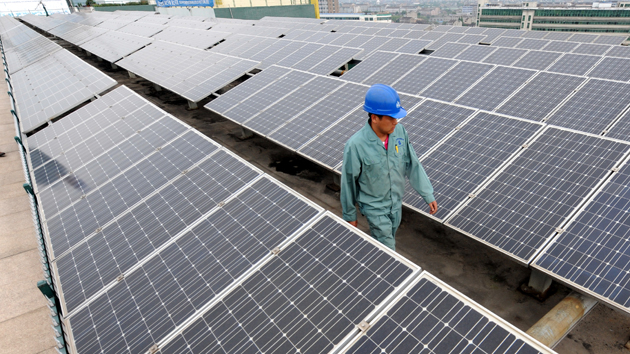 The United Nations climate folks think global investment in renewable energy needs to hit $1 trillion a year by 2030 to keep global warming to an acceptable level. So it might seem disconcerting that in 2013, investment dropped for the second year in a row, down 14 percent from 2012 to $214 billion, according to new data released by Bloomberg New Energy Finance (BNEF) at its annual confab in New York this week.

As investment fell, so too did the total amount of renewable energy being installed worldwide. That’s down nearly 7 percent from 2012 to 2013.

But don’t worry—at least not too much. Even though fewer renewable power systems (excluding large hydroelectric projects, which BNEF doesn’t count in this analysis) were installed last year, we were using more of it: Renewables accounted for 8.5 percent of all the power generated worldwide in 2013, up from 7.8 percent in 2012. BNEF estimated that renewables saved 1.2 billion metric tons of carbon dioxide emissions, equal to keeping 252.6 million cars off the road.

In 2013, renewables saved 252.6 million cars worth of carbon emissions.

There are two forces at work behind the dropping investment figures, one a good news story and the other not so much. The good news is that 80 percent of the investment decline came thanks to the falling cost of renewable energy technology, primarily solar panels, according to BNEF Advisory Board Chairman Michael Liebreich. The cost of a rooftop solar system in California, for example, which is a good barometer of national trends, has fallen by a third just since 2010. The remaining 20 percent was due to a drop in actual construction activity, thanks to the uncertain fate of government subsidies and general economic sluggishness, especially in Europe.

Still, Liebreich told the clean-energy CEOs and investors gathered here this morning that Bloomberg’s proprietary data about future investments suggest annual clean tech installations worldwide are likely to jump 37 percent to 112 gigawatts—a record level—by 2015. Even last year, renewables accounted for more than 40 percent of all the new power installations (including coal plants, nuke plants, etc.) built in 2013. In other words, any time a new power system gets built, it’s increasingly likely to be renewable and not something dirtier.

“This is about a future that’s structured differently than the past,” Liebreich said.

The global trends weren’t spread evenly across countries. Even though China’s overall investment dropped, it still managed to surpass, for the first time ever, the sum spent by all of Europe, where a stagnant economy led countries like Spain and Bulgaria to cut spending on clean-energy subsidies. China is the world’s top renewables investor, spending $56 billion on it in 2013 (the United States is at $35.8 billion).

In the US, the dip in investment hid a couple other important milestones: Last month California, the nation’s biggest solar market, broke its all-time solar power production record twice on two consecutive days. And in January, the United States got an all-time record 4.8 percent of its power from wind turbines, according to BNEF.