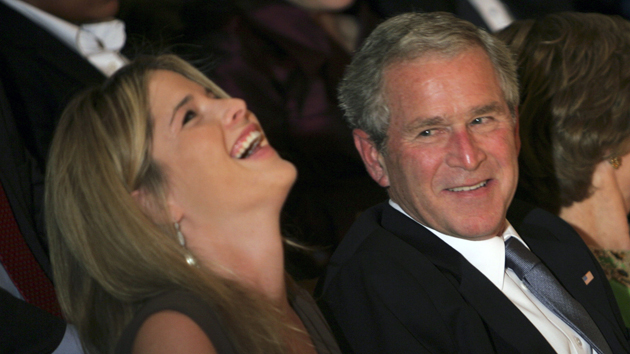 Jenna Bush Hager with her father in 2008.Lawrence Jackson/AP Photo

NBC’s Today landed a hot exclusive for their Friday episode. The show will air an interview with former president George W. Bush, who has been press-shy in retirement. For the rare interview, the network brought in their most august, hard-hitting journalist to non-enhanced interrogate Bush: his daughter, Jenna Bush Hager. The president’s daughter has been a correspondent for Today and NBC News since 2009. Back then, Today‘s executive producer Jim Bell said the president’s daughter hadn’t been hired for her political connections. According to the Associated Press: “Bell said Hager won’t be covering politics. He said he didn’t consider the job as a down payment for a future interview with her father, who has been living quietly in Texas since leaving office earlier this year.”

What will Bush Hager ask her father? Will she quiz Bush about the Senate’s investigation of the CIA’s torture program during his tenure? Ask him how he feels about the long-term unemployed who have struggled to find work after the recession that began under his watch? See if he agrees with his former vice president, who thinks we should bomb Iran?

No, silly. Bush Hager will have a pleasant little chat about her father’s retirement hobby of painting. The Bush Presidential Library in Dallas is set to rollout a new exhibit this week featuring Bush’s portraits of 24 “world leaders.” Based on advance excerpts of the interview provided by NBC, Bush Hager poses challenging questions such as whether any of the subjects have seen their portraits yet (they haven’t) and whether her mom was offended when her dad tried to paint her (“Yeah, don’t paint your wife,” he jokes). Journalism!

Here’s a preview of the interview from Thursday’s show: