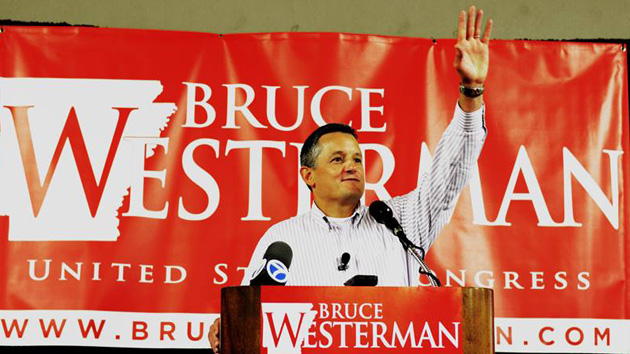 In January, Mother Jones broke the story of one of the newest affiliates of Charles and David Koch’s sprawling political machine, a consulting firm named Aegis Strategic created to identify, recruit, and groom free-market-minded candidates for elected office. Aegis bills itself as a one-stop shop for aspiring politicians, able to handle general consulting, fundraising, direct mail, social media, and more. The firm is run by Jeff Crank, a radio host and two-time congressional candidate who previously ran the Colorado chapter of Americans for Prosperity, the advocacy group founded by the Koch brothers.

When we reported on the firm earlier this year, Aegis Strategic had only one client: Marilinda Garcia, a New Hampshire state lawmaker running for Congress. But new campaign filings show that Aegis has since signed up at least one more congressional hopeful: Bruce Westerman, the former Republican majority leader of the Arkansas state House.

Westerman is running to replace Rep. Tom Cotton in Arkansas’ 4th Congressional District. (Cotton is now running for Senate and hoping to oust the incumbent Democrat Mark Pryor. Americans for Prosperity has spent millions of dollars attacking Pryor on the airwaves.) Westerman’s campaign paid Aegis $4,000 for strategy consulting in March, campaign records show. (In January, Westerman also tweeted a photo of himself with Brad Stevens, Aegis Strategic’s director of candidate identification, with the message, “Caught up with part of campaign team.”)

According to Westerman’s campaign website, he was the first GOPer to lead the Arkansas House in 138 years. And he wouldn’t have been in that position without the help of the Kochs’ political network, especially Americans for Prosperity. During the 2012 election cycle, AFP reportedly spent upwards of $1 million in Arkansas on mailers, a bus tour (featuring Cliff from the TV show Cheers), phone banking, and grassroots canvassing. That effort helped flip both the state House and Senate from Democratic to Republican control. AFP figured so prominently in the 2012 cycle that the Arkansas Times named the Koch brothers “Arkansans of the Year.”

Both of Aegis’ two congressional clients also have received financial support from Kochworld. Garcia received a $2,500 donation from Koch Industries’ political action committee, two $2,500 checks from AFP-New Hampshire’s Greg Moore, and $250 from Alan Philp, whom Aegis lists as its chief operating officer. Westerman also got a $250 check from Philp.

Now, after AFP helped Westerman succeed in Arkansas, another offshoot of the Koch political operation is working to send him to Washington.