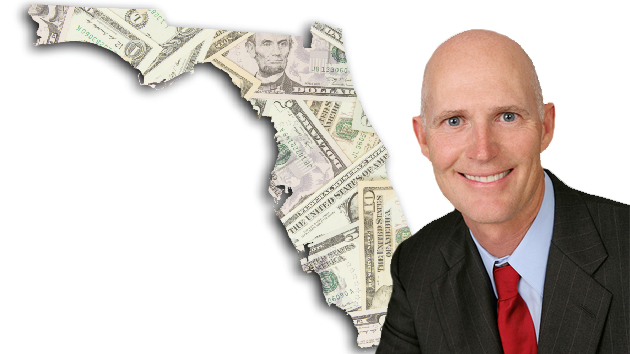 This Thursday, a who’s who of Florida big shots will hold a private, $1,000-a-head fundraiser for the Republican Party of Florida and Gov. Rick Scott’s reelection effort, led by a host committee that includes Mel Sembler, the founder of a notorious substance abuse rehab program that folded after allegations of extreme abuse were lodged against several of its facilities.

The program, Straight Inc., was founded in 1976 by Sembler, a developer, and his wife, Betty. In the 17 years that it operated drug treatment centers, Straight Inc. was plagued by news reports and at least one civil suit claiming that its staff kidnapped its adult patients and mentally, physically, and sexually abused their underage charges. Two state investigations substantiated reports of abuse.

Straight Inc. officials consistently denied these allegations. Sembler’s biography on the Sembler Company website hails Straight Inc. as having “successfully graduated more than 12,000 young people nationwide from its remarkable program.” Sembler, it adds, “is nationally recognized as an activist in the anti-drug campaign.” Sembler could not be reached for comment.

Critics paints a much darker picture. “Children had to flap their arms like chickens or else face shaming as ‘sluts’ and homosexuals,” John Gorenfeld reported in the May 2006 issue of Mother Jones. “Hundreds of Straight alums now claim they were scarred for life, among them Samantha Monroe, who was enrolled in 1980…and claims she was starved, raped, and confined in a closet.”

Sembler is a longtime Republican fundraiser. He’s already donated $25,000 to Scott’s reelection PAC. And even after abuse allegations against Straight Inc. were widespread, the program enjoyed public support from many high-profile GOP figures. In 1985, Nancy Reagan brought Princess Diana to a Straight Inc. facility in Virginia—two years after a jury found that staff from that facility had kidnapped a college student. In his inaugural address, President George H.W. Bush celebrated Straight Inc. as one of a “thousand points of light” that exemplified stewardship. In 1993, the year that Straight Inc.’s last drug treatment facility closed, Sembler was serving as a US ambassador; he had been appointed by the elder Bush.

Straight Inc. staffers were alleged to have abused clients at a number of clinics. After Monroe escaped a Straight Inc. program in Florida at age 13, she says, Straight Inc. staff hog-tied her, brought her back to the facility, and placed her in a “timeout room.” “Monroe had no choice but to soil her pants with urine, feces and menstrual blood,” a 2002 St. Petersburg Times article reported. “She says Straight staffers called this punishment ‘humble pants.'” Soon, a staffer began raping her, the Times reported, and she became pregnant at age 14.

In 1989, according to the Los Angeles Times, the Texas Commission on Alcohol and Drug Abuse released a damning report of Straight Inc.’s Dallas-area Straight Inc. clinic. “The report said that clients were tied up with rope and with an automobile towing strap to prevent escape, that clients were physically restrained for minor infractions such as ‘failure to sit up properly,’ and that bedrooms were overcrowded and furnished with ‘containers to be used for urination,'” the Times reported. Citing the huge need for drug treatment facilities in Texas, the commission allowed Straight Inc. to remain open, pending oversight and changes to its program.

In 1990, the California Department of Social Services ordered Straight Inc.’s Yorba Linda facility to close after investigators said they substantiated several complaints of abuse. According to these complaints, Straight Inc. staff had subjected children in their care to “unusual punishment, infliction of pain, humiliation, intimidation, ridicule, coercion, threats, mental abuse…and interference with daily living functions such as eating, sleeping and toileting.”

In 1983, Straight made undisclosed financial settlements with two Florida women, Arletha Luann Schautteet and Hope Yvonne Hyrons, who claimed that they had been kidnapped by employees of a Straight Inc. facility in Florida and imprisoned there. In a sworn statement, Hyrons, 19, said she was abducted from a gas station, physically prevented from leaving the Straight Inc. facility, and strip-searched. That same year, a judge awarded 20-year-old Fred Collins $220,000 after a jury found that he had been detained against his will at a Straight Inc. facilities in Virginia and St. Petersburg in 1982. An appellate court later denied Straight Inc.’s appeal. Schautteet and Hyrons testified on Collins’ behalf, according to the Washington Post, repeating the allegations they made against Straight Inc. prior to their financial settlements.

Straight Inc. repeatedly denied allegations of abuse and kidnapping. A Straight Inc. clinical director told the St. Petersburg Times that Hyrons “has a history of pathological lying…the girl is just playing scapegoat kind of games.” After complaints about the Yorba Linda program led to its closing, a Straight counselor told the Los Angeles Times that he had “never seen anyone tormented.” “Some kids get very upset and lie and some parents believe them,” he said. Reacting to the jury verdict for Collins, a Straight Inc. clinical director told the Washington Post that the outcome was “unfair” and “really scary…It means that every time I or any other staff member tries to help a young person, we’ll have to be frightened of the legal consequences.”

In 1991, after Virginia state officials stripped that Straight Inc. facility of its license, the operation moved to Maryland. State officials in Maryland spent hundreds of hours investigating abuse allegations before licensing Straight Inc., in an agreement which noted that investigators “found no truth to any of the allegations.” In response to the Texas commission report, staff at the Dallas-area Straight Inc. program pointed out that they had fired at least one offending staff member whose actions were highlighted in the report, who had gagged a patient with a Kotex pad. By the time that Monroe made allegations against Straight Inc., the program no longer existed.

After Straight Inc. closed, the education arm of Sembler’s organization lived on as a new program named the Drug Free American Foundation, which still exists today. Sembler, after serving as ambassador, continued to fundraise for prominent Republicans, including Mitt Romney. He also hosted an event to raise money for I. Lewis “Scooter” Libby’s legal defense fund when the former Bush White House aide was on trial for perjury.