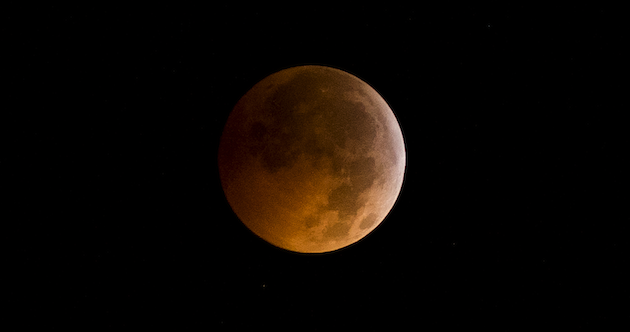 UPDATE: Sunday, September 27, 2015: There is a new Blood Moon tonight. Watch it here. It is the last one you will get to see for many years.

Why is this night different from all other nights? Tonight the clouds will part, the heavens will open, the stars will shine, and the moon will bleed. Groovy! The blood moon, a deliciously named full lunar eclipse rendering the moon red, will be visible in the skies above North America around 2 a.m. Eastern time.

In the olden days the sudden appearance of a big red bloody moon probably sent people into a panic. Terrified, they probably ran around screaming, “Help me! Help me! My God, the moon has turned red! The moon has turned red! We’re all going to die!” But then the moon would turn back to normal and they’d still be alive and probably a bit ashamed that they’d lost their heads and they’d warn their kids, “Look, kids, one day the moon might turn red for a little while, but don’t worry. It’s just a thing. Why does it happen? I don’t know. Why does anything happen in this crazy world of ours! But if it does turn red, it’ll be fine. Don’t run around screaming. You’ll feel very silly in the morning.”

Nowadays, we have computers and microwaves and iPhones and telescopes and we’re all very bright and evolved and we all watch Cosmos and the moon turning red is no big cause for alarm and…wait a second, what’s that?

John Hagee, a best-selling author and evangelist who once claimed that Hurricane Katrina was God’s way of punishing New Orleans for allowing LGBT parades, says that this is the dawning of the end of days. “God is literally screaming at the world: ‘I’m coming soon.'” This is literally not true.

The mega-church founder does not believe that the world is ending just because the moon is turning red. The moon turns red all the time. The last total lunar eclipse was was in December 2011. What makes this blood moon slightly more notable than your average run of the mill blood moon is that it is the first of a tetrad, a series of four lunar eclipses that will happen about six months apart. The next one is set for October 8. These are sort of uncommon insofar as the last one was in 1967, but not that uncommon when you really think about the vastness of time, history, and space. But 1967 was also the year of the Six-Day War, Hagee would point out, and this blood moon is falling on the first night of Passover and even the most critical skeptic would have to admit that that coincidence is…well, utterly meaningless. As even the Young Earth Creationists at Answers in Genesis explain, “The timing of the eclipses…while interesting, falls far short of the sort of signs that will cause the heavens to shake (Matthew 24:29).”

The End Times are not here. Sorry. Don’t forget to file your taxes.

UPDATE: Should the clouds fail to part, you will be able to see the blood moon here: