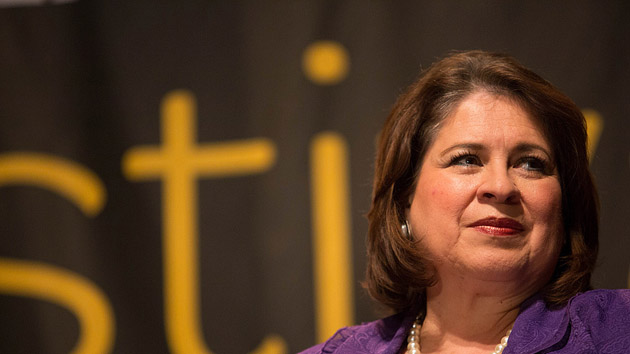 Minutes before midnight last June 25, after state Sen. Wendy Davis concluded her 12-and-a-half-hour filibuster of a bill to severely limit abortion access in Texas, a colleague of Davis’ took the mike. Angered that the Republican leadership seemed to be ignoring female senators like herself, state Sen. Leticia Van de Putte asked, “At what point must a female senator raise her hand or her voice to be recognized over the male colleagues in the room?” The Davis supporters who’d filled the gallery suddenly erupted in applause, a roar that only got louder as order turned to chaos, midnight came and went, and the infamous SB 5 legislation was, for the time being, defeated.

Today, 59-year-old Van de Putte once again finds herself alongside Davis, who’s running for governor. She is the Democratic nominee for lieutenant governor of Texas and will face either incumbent David Dewhurst or hard-right conservative state Sen. Dan Patrick in November. (Dewhurst and Patrick will compete in a May 27 runoff to pick the GOP nominee.) Right now, Davis is the talk of Texas politics, grabbing all the headlines and raising eye-popping sums of money. But Van de Putte may figure larger in the future of her state. Latina, progressive, and a sixth-generation Texan, she has a serious chance of winning, especially if a fire-breather like Patrick wins the runoff, and she is the type of candidate Democrats need as they try to capitalize on the state’s growing Latino population and turn Texas blue.

In other words, if Van de Putte wins, instead of asking for permission to speak, as she did last June, she’d be giving it. While she may be an underdog—any Texas Democrat running for statewide office is—she’s no long shot. A recent University of Texas/Texas Tribune poll showed her trailing Patrick by 9 percentage points—2 less than Davis’ deficit against her Republican rival, Attorney General Greg Abbott—and Dewhurst by 12. If Van de Putte did pull off an upset—and Davis fell short—it would still be the biggest win for state Democrats since Ann Richards won the governorship in 1990.

Davis and Van de Putte share the top of the ballot, but in many ways they couldn’t be more different. Davis is composed, lawyerly, and on-message; Van de Putte (whose maiden name is San Miguel) practically preaches from the dais, her speeches peppered with one-liners and zingers and folksy wisdom. At one event last year, a copy of her prepared remarks given to reporters included the disclaimer: “**Please note that the Senator frequently diverges from her prepared remarks**”

On a recent Sunday morning, Van de Putte didn’t appear to have any prepared remarks as she addressed a Texas AFL-CIO convention at a downtown Austin hotel. “My journey here was not an easy one,” she said. In the past year, her six-month-old grandson, 82-year-old father, a beloved employee of her husband’s company, and her husband’s mother had all died. Grief stricken, Van de Putte said she wouldn’t have thought about running for lieutenant governor but for her friend Becky Moeller, the president of the Texas AFL-CIO. Moeller gently nagged her about running, and gave her polling data showing a narrow path to victory. Van de Putte and her family prayed on the decision. Ultimately, seeing the direction her state was headed, she couldn’t say no. She told the convention attendees, “You know, Mama ain’t happy. And if your family’s like my family, Mama ain’t happy, ain’t nobody happy.'” Pause. “And if Grandma’s not happy, run! And so I am.”

Van de Putte’s 20-minute speech veered from the tragic (her family’s recent losses) to the euphoric to the hard-hitting. She singled out Sen. Ted Cruz (R-Texas) for “throwing a temper tantrum” that shut down the federal government. Yet as any politician worth her salt knows, Texans don’t take kindly to criticism of their beloved state, and Van de Putte’s speech deftly walked the line between touting the so-called Texas miracle (“It’s because of Texas families that we’re succeeding”) and slamming her Republican counterparts for not investing in public schools and infrastructure.

Throughout her speech, Van de Putte hit on a populist theme: “I know who you are. I know where you’ve been. I know where you’re going.” She used that line to appeal to the teachers, tradesmen, communication workers, and others gathered in the ballroom, and she urged them to remember the words of Martin Luther King Jr.: “Life’s most persistent and urgent question is, what are you doing for others?” That populist message could play well should the GOP nominee be Dewhurst, a wealthy businessman who spent about $25 million of his own money on a losing US Senate bid in 2012 and other campaigns. Dewhurst has said this will be his last run for office; Dewhurst, who was worth at least $200 million heading into his Senate run, recently told the Associated Press he needs to “go back [to the private sector] and earn some money.” Patrick, the other GOP hopeful, has come under fire for his overheated rhetoric, such as describing the flow of immigrants from Mexico to Texas as an “illegal invasion.”

Of course, Van de Putte will need a lot more than her friends in the labor movement to win in November. But as local and national Democrats pour money, manpower, and technology into their quest of turning Texas blue, Leticia Van de Putte is a name you can expect to hear a lot more often.