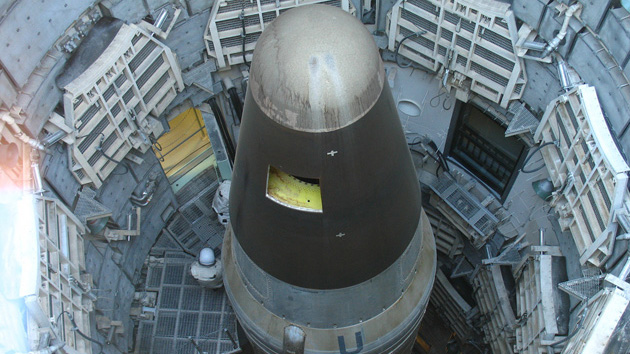 For American taxpayers, the biggest unheralded threat from the crisis in Ukraine may be its effect on the military budget. Foreign policy hawks already have seized upon the so-called “new Cold War” as a rationale for shelling out billions of additional dollars on nuclear weapons.

Russia’s annexation of Crimea shows the need to “build up missile defenses and modernize the US nuclear force,” James S. Robbins, a senior fellow for national security affairs for the American Foreign Policy Council, wrote last week in USA Today. “To live in the 21st century, the United States will need to relearn the lessons of the 20th.”

Robbins’ sentiment was echoed on Thursday by Loren Thompson, the CEO of the Lexington Institute, a military think tank funded by defense contractors: “Many people in Washington might have been prepared to forego spending money on a new generation of nuclear weapons before Putin made his move,” Thompson wrote in Forbes, “but now he has changed the strategic calculation.”

The Crimean takeover comes at the exact moment when military planners are debating how to update America’s nuclear arsenal. The Defense Department plans to start procuring replacements for its aging fleets of nuclear bombers, submarines, and Trident missiles by around 2020. The Congressional Budget Office estimates that this and the maintenance of our existing nuclear arsenal will cost $355 billion over the next 10 years. While most nuclear weapons experts believe that we could spend far less than that to effectively deter attacks, cuts to nuclear weapons spending no longer seem inevitable.

“It will certainly be much more difficult to reduce spending on nuclear weapons in the current environment,” concedes Tom Collina, the research director for the Arms Control Association.

The US-Russia standoff already may have stalled efforts to remove the last American nukes (that we know of) from European soil. Arms control advocates have long argued that decommissioning the roughly 175 US bombs kept in the Netherlands, Germany, Belgium, Italy, and Turkey would come at no strategic cost (the weapons are technologically obsolete), and would put pressure on Moscow to make similar reductions. The Ukraine crisis “will close down that debate,” Ian Kearns, the director of the European Leadership Network, an arms control group, told the Guardian.

“If we have to take conventional military action…we could see an escalation to the nuclear level.”

The Lexington Institute’s Thompson argues that Russia is now “on the march” and may invade other Baltic states. “If we have to take conventional military action in the Baltic or Black Sea, we could see an escalation to the nuclear level,” he told me, “and therefore we need to have weapons that are flexible and survivable”—that’s military-speak meaning we would have time to launch a counterattack before being obliterated. In practice, it would mean a new generation of submarine-based nukes, which can’t be taken out in a first-wave attack.

But arms control groups draw the opposite conclusion from the crisis: “Our nuclear weapons did not stop Russia from going into Crimea,” Collina points out. “There’s a case that what we really need to do is spend more on economic aid”—such as the proposed International Monetary Fund bailout for Ukraine—”and that money needs to come from somewhere.”

The military could cut billions of dollars from nuclear weapons programs with little strategic impact, Collina argues. For example, instead of ordering 12 new submarines at a cost of $100 billion, the Navy could order 8 subs and outfit each one with more warheads, providing an equivalent attack capability for $30 billion less.

“We are not going to nuclear war because of Crimea, and that’s a good thing.”

So far, the Crimea standoff has not halted existing US-Russia nuclear disarmament cooperation. On the day the Obama administration announced sanctions on Putin and his “cronies,” a team of Russian inspectors arrived in San Francisco to inspect part of the US nuclear arsenal—a visit made possible by the New Strategic Arms Reduction Treaty (New START), which the two countries signed in 2010.

On Monday, the US and other world powers announced they would kick Russia out of the G8 group of industrialized nations. The same day, leaders from Russia, America, and some 50 other countries arrived at the Hague for the first day of the Nuclear Security Summit, a conference aimed at preventing nuclear terrorism.

Nuclear threats, in other words, don’t seem to play any real role in the “new Cold War”—assuming such a thing even exists. “We are not going to nuclear war because of Crimea,” says Stephen Young, a senior analyst for the Union of Concerned Scientists’ Global Security Program. “And that’s a good thing.”