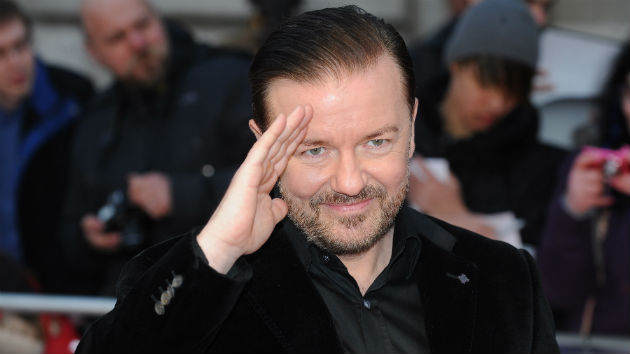 In an interview with Radio Times, English actor and comedian Ricky Gervais expressed his frustration with how women are portrayed on TV and in Hollywood movies, especially comedies. (The 52-year-old co-creator of the UK’s The Office was promoting his show Derek, which returns for a second season in April. He said his show will soon feature some “real, good, modern girl power.”)

“I love writing interesting female characters because usually they’re props, particularly in comedy,” Gervais said. “Even in Hollywood, they’re usually air heads or if they’re ambitious they’re straight away cold and need to be taught a lesson. They need to show that getting a man is more important than getting a career. Or they’re just props for men to do funny things…People think that men rule the world but they don’t, really. That was never my experience growing up and certainly not at Broad Hill [nursing home]. Men, when they’re together, revert to the playground.”

(Gervais is correct; Hollywood absolutely does have a woman—and girl—problem.)

For this, Indiewire declared him the “Hollywood Feminist of the Day,” which fits nicely with some of Gervais’ other comments:

I love angry, god fearing men in power imposing ancient myth-induced morality on what modern women can and can’t do with their own bodies.