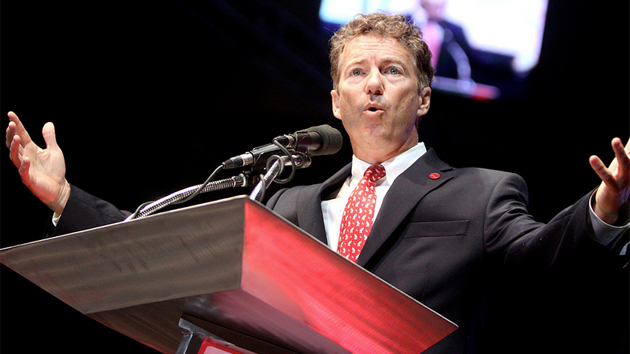 It is our role as a global leader to be the strongest nation in opposing Russia’s latest aggression.

Putin must be punished for violating the Budapest Memorandum, and Russia must learn that the U.S. will isolate it if it insists on acting like a rogue nation.

This does not and should not require military action. No one in the U.S. is calling for this. But it will require other actions and leadership, both of which President Obama unfortunately lacks.

Paul went on to outline a number of steps he would take, were he president, including imposing economic sanctions and visa bans (which Obama has already implemented), kicking Russia out of the G-8, and building the Keystone XL pipeline. (He did not explain how helping a Canadian firm export tar sands oil would intimidate Putin.) He added, “I would reinstitute the missile-defense shields President Obama abandoned in 2009 in Poland and the Czech Republic.” He griped, “The real problem is that Russia’s President is not currently fearful or threatened in any way by America’s President, despite his country’s blatant aggression.”

With this article, Paul was eagerly joining the GOP chorus that in recent days has been blasting Obama for being weak and feckless regarding Putin and the Ukraine. That was not surprising. As a politician pondering a run for the Republican presidential nomination in 2016, Paul has had to contend with complaints from the GOP’s overlapping neocon and establishment wings that he is an isolationist “wacko bird,” as Sen. John McCain indelicately put it. Here was a chance to join his party’s mainstream in denouncing Obama. Yet to become a member in good standing of the GOP’s Get-Obama Brigade, Foreign Policy Division, Paul had to flip-flop.

In April 2009, Paul, on the cusp of launching his Senate campaign, gave a talk to the College Republicans group at Western Kentucky University. He was asked about the large number of US troops stationed overseas by an audience member who said it was “ridiculous” for the United States to maintain permanent military bases in Europe and elsewhere around the world. Paul responded sympathetically: “We’re now 60 years in Germany, 60 years in Japan, 50 years in Korea.” He defended his father, Ron Paul, for having noted during the 2008 presidential race that there were foreign policy causes for 9/11: “We have to understand there is blowback from our foreign policy.”

Arguing for a restrained foreign policy (and smaller military establishment), Paul immediately turned to the subject of Russia’s invasion of Georgia the previous year (which these days has often been cited as analogous to the Ukraine crisis).

For example, we have to ask ourselves, “Who needs to be part of NATO? What does NATO need to be at this point?” One of the big things [for] the neocons—the people in the Republican Party sort of on the other side from where I come from—is they want Georgia to be part of NATO. Well, Georgia sits right on the border of Russia. Do you think that might be provocative to put them in NATO? NATO’s treaty actually says that if they’re attacked, we will defend them. So, if the treaty means something, that means all of a sudden we’re at war with Russia. If Georgia would had become, Bush wanted Georgia to become part of NATO, had they been part of NATO, we’d be at war with Russia right now. That’s kinda a scary thing. We have to decide whether putting missiles in Poland is gonna provoke the Russians. Maybe not to war, but whether it’s worth provoking them, or whether we have the money to do it.

So when Russia sent troops into Georgia (on George W. Bush’s watch), Paul didn’t want to provoke Russia by placing missiles in Poland. Yet today, when Russia moves into Ukraine (on Obama’s watch), he’s all for dispatching missiles to Poland to send a message to Putin. Does Paul care more about Crimea than Georgia? Or does he care more about keeping a foot on the GOP’s anti-Obama bandwagon? Paul’s office did not respond to a request for comment.

It appears that Paul, an isolationist who doesn’t want to be isolated within the GOP, spotted the opportunity to develop some Obama-bashing hawk cred as the presidential campaign nears. “I stand with the people of Ukraine,” Paul declares now, though that was not what he said about Georgians. What’s changed in the past six years: geopolitics or Paul’s own political calculations?